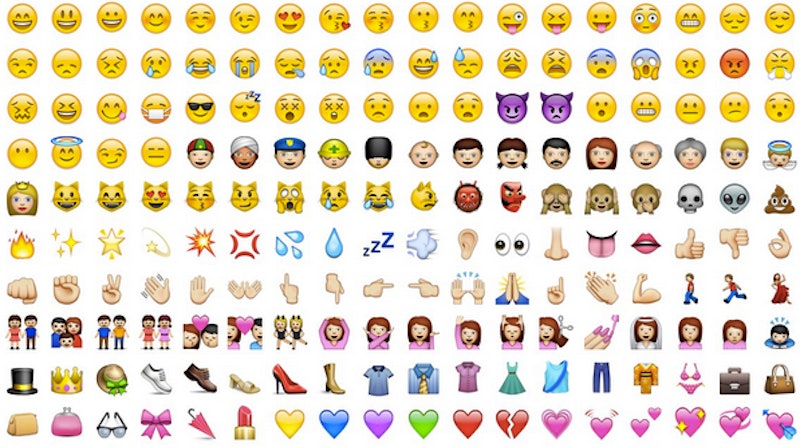 As of today, the most millennial of all racial diversity problems may have a solution. Emojis for people of color may be on the way in now that Unicode Consortium, the organization that sets how emojis look on devices, proposed an update that includes a fix to the emoji diversity problem — and it's about damn time.

Emojis seem to have come out of nowhere, but they've quickly become a huge component of texting, and by extension, digital communication as a whole. I don't know about you, but I’ve had entire text conversations in emoji. Songs and threats have been communicated in emoji. And, while the first set of emojis was limited, recent updates have given us everything from same-sex couples to several variations of the laughing/crying face. There's pretty much anything you could ask for in emojis… except for people of color.

But Unicode Consortium is on the case From the consortium:

People all over the world want to have emoji that reflect more human diversity, especially for skin tone. The Unicode emoji characters for people and body parts are meant to be generic, yet following the precedents set by the original Japanese carrier images, they are often shown with a light skin tone instead of a more generic (inhuman) appearance, such as a yellow/orange color or a silhouette.

Since the emojis were originally used in Japanese carriers, it makes sense that the humans, which were supposed to be “generic,” only had one skin tone. But after the expansion of emojis across the world, it's time for "Man With Turban" to no longer be the only emoji with a different skin tone.

The proposed update will allow users to use five symbol modifiers to choose skin tones based on the Fitzpatrick scale of skin type.

On their own, the modifiers will be seen as a color swatch and when following a emoji human character, will change the skin tone.

The consortium also notes that “when a human emoji is not followed by a emoji modifier character, it should use a non-realistic skin tone, such as that typically used for the smiley faces, or a silhouette.”

So if this update is accepted, even if you can’t change the skin tone of an emoji using the color swatch, at least it’ll really look "generic."

I was hoping for the ability to automatically set which skin tone I wanted to use across the board for my human emojis, but I suppose this will do. At least we'll be able to add a little color to emojis like this one: