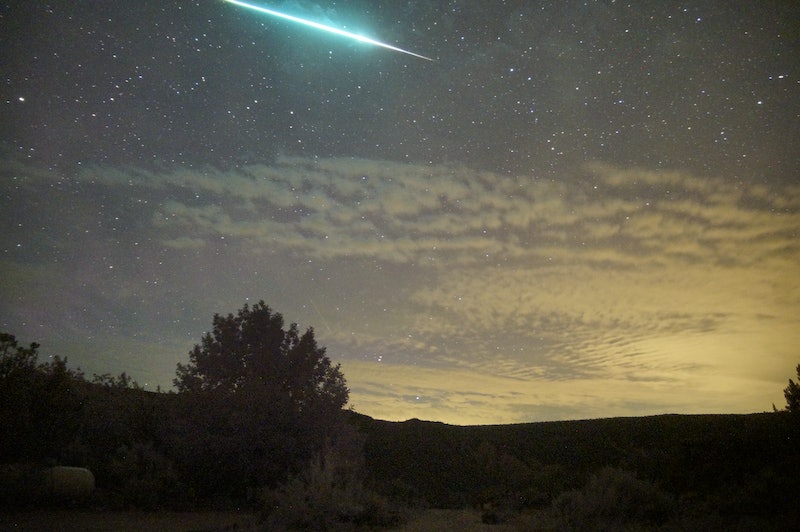 Multiple strange objects were spotted in the sky on Monday, reported by witnesses across the U.S. and even in Asia. On Monday night, more than 200 sightings of a bright greenish object in the sky were reported across 13 U.S. states and a similar object was spotted in Japan. The sightings were likely all different objects that happened to travel across the sky at around the same time. NASA has offered its explanations for each object, but do they explain the countless similar cases in the past? Monday night's sightings are far from the first time these green lights have been spotted in the sky.

The first green object was reported after 6 p.m. on Monday more than 200 times in 13 states in the Eastern U.S., stretching from Ohio and Pennsylvania down to Georgia and South Carolina. In West Virginia, Benwood Police Department's Sgt. Luke Thomas was able to capture the green fireball-like object streaking through the sky on his dash cam. What could it have been? Likely a meteor, according to Bill Cooke of the NASA Meteoroid Environment Office. That theory makes sense, given that the annual Taurid meteor shower is going on right now.

But Americans weren't alone. Across the ocean, observatories in Kyushu, Fukuoka, Hiroshima, and Ehime, Japan recorded a similar green object flash through the sky. However, experts there say it's likely that it was a bolide, an extremely bright shooting star.

But then there was a third case in Chicago, where residents spotted a much-slower-moving object travel across the sky. This object, said Cooke, was likely "a piece of space junk." However, it turned out, the object was nothing more than a publicity stunt. What Chicago residents actually saw had nothing to do with celestial bodies — it was three skydivers from the Red Bull Air Force floating down to earth with flares shooting out of their shoes.

As for that bright green object that flew over 13 states, similar "green fireball" sightings have been reported for decades. In the 1940s, the U.S. Air Force asked astronomer and meteor expert Lincoln LaPaz to spearhead an investigation into the many green fireballs spotted near sensitive military installations in New Mexico. Several reports of these green fireballs were made per month, and only near the military installations in New Mexico, baffling the Air Force and the American public. In 1952, LIFE magazine even offered its own case for the existence of interplanetary saucers after insufficient evidence was established to explain these green fireballs.

More recently in 2006, at least three of these bright green fireballs flew over northeast Australia. In that instance, physicist Stephen Hughes of the Queensland University of Technology in Brisbane explained that they were likely debris from Comet 73P/Schwassmann–Wachmann 3, a periodic comet that started disintegrating in 1995. Hughes told Live Science:

A transient electrical link between the ionosphere and ground, created by meteors or some other means, could help to solve the mystery of many UFO sightings.

Regardless of expert explanations, these green fireballs continue to dazzle eyewitnesses who spot them and make us want to believe.

More like this
Pret & Costa’s Coffee Is The Strongest On The High Street, According To Which?
By Sam Ramsden
This Is When Netflix Is Going To Start Charging You For Sharing Passwords
By Darshita Goyal
6 Organizations Fighting Police Brutality That You Can Support Right Now
By Syeda Khaula Saad and JR Thorpe
Twitter Has *A Lot* To Say About The "Single Penalty”
By Sam Ramsden
Get Even More From Bustle — Sign Up For The Newsletter
From hair trends to relationship advice, our daily newsletter has everything you need to sound like a person who’s on TikTok, even if you aren’t.