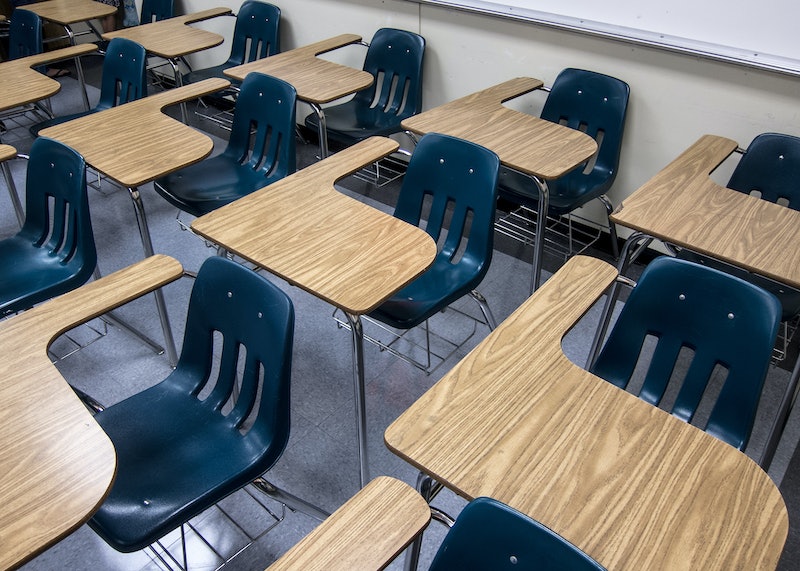 I've been teaching American literature to high school freshmen and sophomores for a while. Often, in the middle of the year, one of my students will say, "Why is all the literature we read in school so depressing and weird?"

And I'm like, "Huh. Good point. Every single novel is depressing and weird."

I guess this is the secret role of books — to reveal that life can be both.

American literature is amazing, and it's important for students to get a sense for their country's literary history through the classics. Occasionally an odd English-teacher fantasy pops into my head: I picture parents and students sitting at the dinner table, bonding over discussions about renowned works of fiction and nonfiction. "Oh, you're reading The Great Gatsby? Can you believe that Gatsby! Do you think the class differences still prevent people from marrying? What are your thoughts on the green light? Total symbol of American folly, am I right or am I right? Also, will you pass the butter?"

At their best, the classics of a nation can do this. They can create a platform to discuss culture and the problems that arise in human life. That's awesome. But... then there's sort of a flip side, too. Since each of the classics is the product of a complex (and often suicidal) human from a time period that resembles a foreign culture, the messages of these beloved classics can be a little bewildering — particularly for teenagers who don't yet have the context or life experience to grasp every symbol on the pages. My students have taught me that these novels send some strange messages if you're not quite ready for their full impact, like these:

To Kill A Mockingbird

"Atticus is the man!"

Since Atticus comes off as perfect in To Kill a Mockingbird, and since his speech defending Tom Robinson is so eloquent (albeit laden with Harper Lee's pointed criticism of the American jury system), students get a message along the lines of: Atticus is AWESOME. But... he's not. He's a one-dimensional white male character who knows everything and is always right, and that's likely what Harper Lee knew she needed to sell her novel in 1960.

Atticus's superhero qualities provide a smokescreen for Lee's more important takeaways — including that children like Scout and Jem have the power to stand up to injustice, and that too many Tom Robinsons died innocent men at the hands of a racist justice system.

Wait... what? As I explain to my confused students, "NO, THEY DID NOT!"

In reality, John Proctor did not have an affair with Abigail Williams. Although the names are real, and both Proctor and Williams were key players in Salem's drama, the extramarital-coitus-in-the-barn part is a figment of Arthur Miller's imagination. Because of Miller's addition of the historically inaccurate affair, students pick up on the idea that Abigail Williams' "harlotry" was at the root of one of this continent's tragedies, when what was really at the root of it was Puritan fear of women with social and economic (not sexual) power. *headdesk*

When life gets you down, just, like, abandon it for two years while you live in a shack on your bud's pond. Write tons of poignant notes about the seasons and everything will work out

This is a very hipster idea, living on a pond and contemplating life. But Thoreau's account glosses over the realities of ditching reality for two years — something students don't seem to take into account. After all, this is something Thoreau could do because of his social standing: He was a relatively well-off Harvard grad with a celebrity friend like Emerson whose land he could use for his project. (By the way, he visited Emerson frequently for fancy meals.) This is the perfect setup for a wealthy New Englander with celebrity pals in the 1840s, not so much for, um, anyone else. Cool idea though, bro.

OK, wrong message here... but I can see where they're getting it from. Gatsby is so determined to get Daisy back that he resorts to a life of organized crime and bootlegger-party-throwing, all to show that he is rich enough for her standards. And, oh, he stalks her. He keeps newspaper clippings of Daisy and buys a house across the bay from her, hoping she'd stumble into one of his parties one day. This is, admittedly, an interesting lesson about love for the students, who don't exactly have a ton of other experience to draw on.

When a misogynist sexually assaults his wife's sister, the best treatment for the victim is... take her away to a scary mental institution? Huh?

Stanley's sexual assault of Blanche and the anti-heroine's subsequent mental breakdown leave the gap wide open for interpretation. Unfortunately what students often assume here is that rape is difficult to prove when your reputation is already tarnished. Tennessee Williams portrays Stanley as a misogynistic jerk; he is the villain. But oddly, students often side with him. The implicit warning that sexually active "old maids" like Blanche go crazy and become vulnerable to rape does not work so much for kids (or adults, for that matter) without fully developed frontal lobes.

The Grapes of Wrath

In times of crisis, only the mysterious ways of women can save humanity — but they'll be super-weird about it

When students read the ending of this novel, they look genuinely horrified. And with good reason. By the end of The Grapes of Wrath, the formerly saucy Rose of Sharon has morphed into a serious lady through her pregnancy. (Because you know, that's what pregnancy does to teen moms.) She's so serious, in fact, that after her child's stillbirth, she breastfeeds a dying man because her mom tells her to. Gotta admit it's spine-chilling enough to be genius, but I'm right there with the students' looks of disgust on this one. Oh god why? Why, Steinbeck? Why? The horror. The horror.

The Catcher In the Rye

Growing up as a sensitive, insightful, funny guy is sure to land you in the mental hospital

Although this cult classic is also a student favorite, many of them talk about how depressing Holden's story is. When you ask them why, eventually you get to this: because there is some truth to Salinger's message. This is not exactly art imitating life — you can be a quirky, funny, honest guy like Holden and not go insane — but try telling that to a quirky, funny, honest 15-year-old boy. Unfortunately, life in the hallways hasn't changed all that much since the 1950s. According to them, the bullies still win sometimes.

If you don't like a rule, don't follow it. If someone arrests you? Cool, NBD, you're making a sexy political statement that will inspire people

In all honesty, I have gotten a tiny bit nervous when I've seen the wheels spinning in some of my students' minds after reading this essay in class. They're like, "So wait... if I get in trouble this week, I'm totally gonna make like Thoreau and perform an angst-y protest."

A Farewell To Arms

It's easy to fall in love with Catherine and Frederic's love... if you are 15. Again, a warped version of love lights the pages of a classic. Catherine's devotion to Frederic borders on worship. She is so obsessed that she says stuff to Frederic like, "You’re my religion. You’re all I’ve got." And sure, teenage love can feel like this. But these characters are grown, folks! Get it together, Steinbeck, and get it together, Catherine. She and Gatsby should go to a fictional support group together.

The Age of Innocence

Rich Americans before the turn-of-the-20th-century were selfish, shallow, gossipy idiots

This love story leaves students with an interesting picture of high society in the early 1900s. Unless you do a week-long background unit on history (no time for that; thanks, common core), students are bound to get this impression that rich people in this day and age had nothing more to do than drink tea, whisper secrets to each other, be snobby, and restrain themselves from passionate lovemaking.

If you were a smart, successful young woman in the 1950s, society's expectations for you would crush your soul. Oh and also, when you have sex with a guy for the first time, you might have to be hospitalized because of the hemorrhaging

It's a good thing the last part isn't accurate... my English teacher certainly skipped the explanation of that scene, as I sat there, panicked and bewildered.

But the soul-crushing thing? As my students' faces tell me, turns out there's still some truth to this. Gladly though, many of the restrictions that Plath and her protagonist faced have lessened. Today, thanks to history, smart women can finally thrive as their cool selves... in the United States. Well, in some parts of the United States.

When the light bulb goes off in students' minds and they really get the meaning of Emerson's words, "Whoso would be a man must be a nonconformist,"I can almost see the household chaos that the essay might justify. Teenspeak for Emerson's essay: "I'm not coming home at curfew because I am an independent thinker now, and I don't have to conform to the rules of this family!" Oops.

You secretly want to murder your coolest friend

Students understand that Gene is jealous of his athletic friend. They get it. But students lose their cool when Gene lets that jealousy get so out of control that he pushes his best friend Finny off of a tree branch. And kids are shocked when Finny completely trusts Gene again, then feels hurt by him, and then accidentally dies. I gotta say, I see their point — on a literal level, this book is a hot mess.