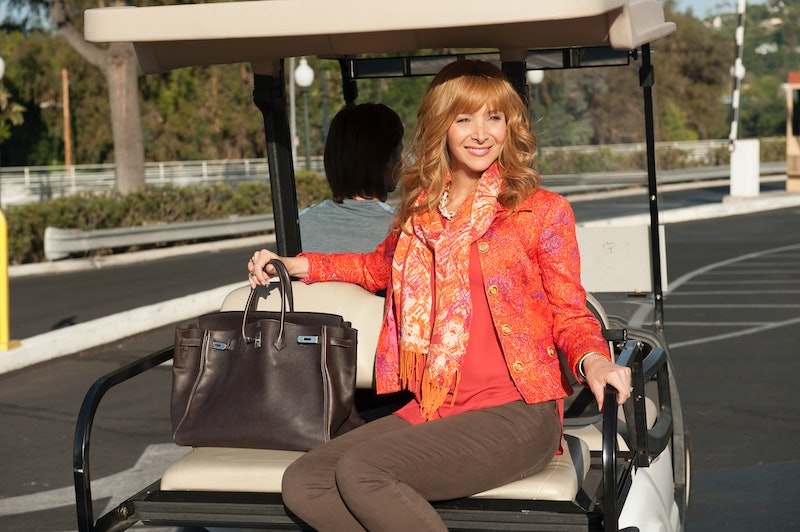 Nine years ago in 2005, reality TV was at the height of its popularity, HBO was the top cable TV network, and Lisa Kudrow starred in a comedy series called The Comeback that combined the two. Created by Kudrow and Sex and the City's exec producer Michael Patrick King, the hilarious ahead-of-its-time half-hour series aired a 13-episode first season that followed Kudrow's Valerie Cherish, a wacky washed-up 90s sitcom star trying to make a comeback with a new sitcom and the reality show that's filming the lead up to it (how meta, right?) Hilarity and awkwardness totally ensued, but then it was canceled. But much like Family Guy, The Killing and now even Twin Peaks, HBO un-cancelled The Comeback , which returns Sunday night.

Has the world changed much since the show's first season aired almost a decade ago? A little. For example, Valerie always talked about her classic appearance on The Tonight Show With Jay Leno, which is now The Tonight Show Starring Jimmy Fallon. But reality TV, awkward comedy, and meta-ness are luckily way more in style today than in 2005. Will an older, wiser Valerie Cherish vie for a classic Fallon appearance? Will she get frustrated with smartphones?

We'll have to wait for Sunday night to find out, but, in the meantime, here's a quick recap of all the hilarity from Season 1.

Valerie Gets Cast in Room and Bored

In the 90s, Val starred in a hit sitcom called I'm It! and she was literally the It Girl at the time. She even had what she called her beloved "Classic Leno" — a hilarious appearance on The Tonight Show With Jay Leno in which a monkey pooped on her head. But since the cancellation of the show, Valerie had trouble getting her career going again... until a reality TV show called The Comeback decided to follow the resurgence of an actress' career through the sitcom Room and Bored. Valerie winds up landing the part — and the reality show!

During some retooling, her character on the sitcom goes from being one of the sassy singles living in a condo to Aunt Sassy, the lame aging owner of the condo who doesn't have many lines. But Valerie tries to make the best of it, by mentoring the show-within-a-show's breakout starlet Juna Millken (played by Malin Akerman) and by standing by the rest of the cast (including Twilight Saga actor Kellan Lutz) when the fledgling show goes through more retooling.

Valerie Faces Off With Paulie G.

Throughout her run on Room and Bored, Valerie develops a rivalry with the sitcom's co-creator and executive producer Paulie G, who antagonizes her and seeks to reduce her role on the show. She tries to win him over with her Cherish charm, she really does, but he just doesn't care for her.

The tension hits a fever pitch during Valerie's big scene where she needs to take a tumble while dressed as a cupcake. Finally, she lets out all her pent-up anger out on the sophomoric writer and punches him in the stomach, causing him to vomit. Then she voms, too.

Valerie Gets Another Classic Leno

When The Comback (the reality show) finally premieres, the edit makes Valerie look like the villain and Paulie G like the victim — including the double-vomit moment. Intially, she's completely mortified and is no longer game for her long-awaited return appearance on The Tonight Show With Jay Leno. But the show must go on. Valerie sits on Jay's couch and the crowd loves her, embracing The Comeback's double vomit. Season 1 ends with her second "Classic Leno."

Will Season 2's Seeing Red include a reenactment of the Paulie G. and Valerie double-vom? Or how about a "Classic Jimmy Fallon" appearance? We shall see.