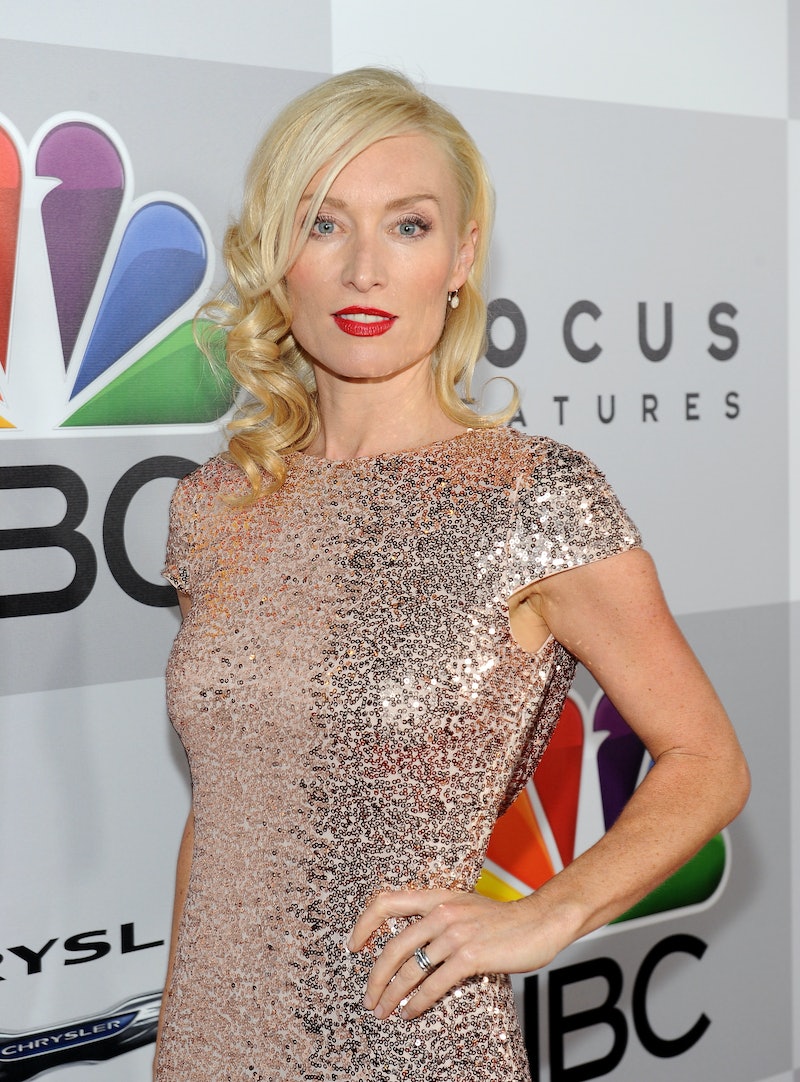 It looks like Storybrooke is about to get a lot more cruel. Victoria Smurfit will play Cruella de Vil on Once Upon a Time this season after the ice clears from the Snow Queen and Elsa's battles. Though the former Dracula star's role was first teased as a mysterious "iconic character" who will appear in the winter finale, Smurfit spilled the beans with a tweet on Tuesday night. "Super excited about playing Cruella for such an iconic show as @OnceABC," she wrote. The tweet has since been deleted, but given her killer looks, she's the perfect fit for Cruella.

There are plenty of ways that Cruella could be incorporated into the OUAT world. She could appear in just flashbacks in the Enchanted Forest, in Storybrooke, or both, but either way, it will be fun to see that enormous fur coat. A fan reportedly spotted Emilie de Ravin (Belle) filming with a Dalmatian puppy, so fingers crossed for plenty of dog action on the show this season. Until more details surface, I have a few theories about how Cruella is connected to — and could stir things up — on the show. Because after the Snow Queen presumably clears out at the end of Season 4A, someone has to take over as the Big Bad.

Who Let the Dogs Out?

The obvious tie for Cruella to Storybrooke is Pongo, Archie's dog. Pongo was the lead Dalmatian in 101 Dalmatians, yet his identity on Once Upon a Time hasn't been explored. Sure, it's likely that Pongo is just a dog and is not really a person trapped in a canine's body, but there's also a possibility that Cruella put a spell on someone and turned him into a dog. The show could show his origin story briefly with Cruella flashbacks in the Enchanted Forest, or incorporate some scenario in Storybrooke where she finally gets ahold of him again.

A Tie to Belle and Rumplestiltskin

Belle seems to know everyone these days. We just saw her connections with Anna from Frozen, so there's a chance she crossed paths with Cruella way back when. More likely, though, is something in Storybrooke for the two of them. My guess is that she'll come to Mr. Gold's shop looking for something — perhaps her long cigarette holder? That would be more of a connection to Rumplestiltskin, but in turn, Belle would likely be involved.

Since Cruella will be introduced in the winter finale — the episode bridging the Frozen storylines with Season 4B, which will have a different focus — she could be connected to the Snow Queen and her family. Could she somehow be one of the Snow Queen's sisters who disappeared, and she wore fur coats to keep warm in icy Arendelle? It's a stretch, but I have a feeling she's somehow linked to Frozen in a bigger way than many fans will expect.

Even if she's not connected to anyone, she could just be there to become the new Big Bad. Once they take care of the Snow Queen, Emma & Co. will need someone else to tackle. There is a chance that Regina shares a connection with Cruella and they could battle it out or link up, but it's more likely that it will be Cruella vs. Storybrooke.

More like this
This 'White Lotus' Symbol Could Hint At A Major Character's Death
By Grace Wehniainen
'The White Lotus' Costume Designer Explains That Accidental 'Princess Diaries' Moment
By Grace Wehniainen
Here’s Everything Coming To & Leaving Netflix In December
By Jake Viswanath
The 'Firefly Lane' Book Ending Teases Way More Tears To Come In 2023
By K.W. Colyard
Get Even More From Bustle — Sign Up For The Newsletter