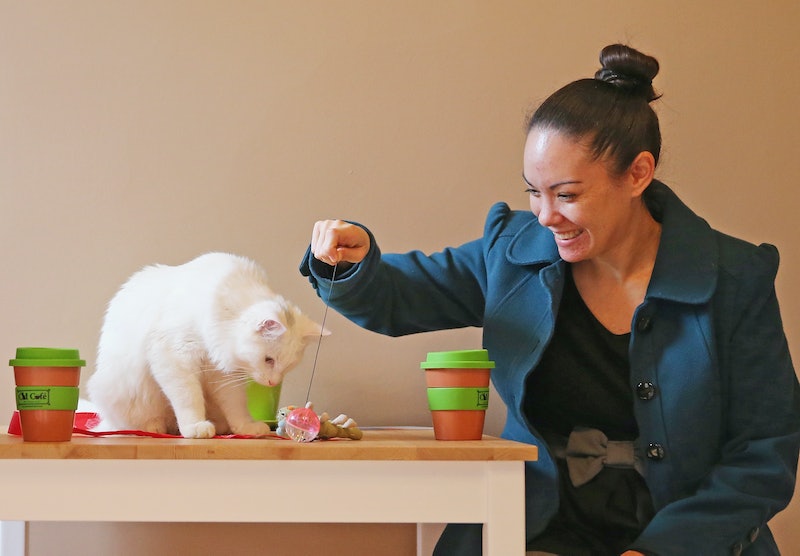 Cats get a raw deal sometimes. They are viewed as being conniving, snobby, mean, and antisocial. The problem with trying to defend them, if you're a cat lover like I am, is that these things are totally true. Cats can be the absolute worst. But so can people, and you don't meet that many people who are all, "ugh, PEOPLE. I don't understand why anyone would live with one." unless you are counting me every time I have ever left my house because I pretty much always say that. Still, the stereotype that every woman of a certain age lives with an assortment of cats is unfair, but not entirely off-base – I am single, in my 30s, and live with two. It balances out though (right?), because I also live with a dog.

While cats might be innately assholes (and they are), there are absolutely things you can do to make your life with them infinitely easier. I'm not talking about the obvious noise like buying a lint brush (which I will now take the opportunity to tell you is like bringing a waffle to a gun fight). I'm not exactly a cat whisperer, but I do know a little bit about living with cats without losing your mind. That said, in the interest of full disclosure, on Monday of this week I did storm into my bedroom and close the door because "the cats are everywhere." The struggle continues. But these things help:

1. Water Bottles Are Your Friend

I have a 7-month-old kitten. He is amazing. He is also a giant asshole. The biggest. He's also the first cat I've ever had who does that thing where if you have a full glass on a flat surface he will be all like "Ima sip this, and then Ima KNOCK IT TO THE GROUND JUST TO SEE WHAT HAPPENS." This is why I suggest water bottles with lids. Foil the cat, stay hydrated.

Cats have evolved not to care at all about what you think, feel, or want. It's true, I swear. That's valid science. If you don't work to establish boundaries with your cat from go, you will have a cat who thinks that they run your house. I mean, they're going to think that anyway, but at least if you set boundaries early on, you can harbor the illusion that you are in charge. I trained my oldest cat that he is only allowed on the foot of my bed. The kitten? He's all "I IS ON YER PILLOW LEAVING MAH FECAL SPECS". This is my own fault. Don't be like me.

It's an ungodly nightmare of a task, but trim your cat's nails and early and regularly. Eventually they will learn that you aren't torturing them for information. Cats with well-maintained nails scratch less which means less damage to all of your fine belongings. A lesson I wish I had learned two couches ago.

4. Give Them a Safe Space

You can't get pissed at your cat for always knocking stuff over and being all up in your business if they have no space of their own. Create a nook or two just for your cat. Mine lives for his weekly Fresh Direct box. It doesn't take much.

5. Accept What You Cannot Change

Your cat is always going to want to sleep on your laptop. DO YOU BLAME HIM? Your laptop is warm and stinks of your fingers and you stare at it all the time. Your cat would murder your laptop in a jealous rage if it could! Accept that this is how things are and stop freaking out. It is just what they do. Better to take cute photos and share them on social media than blow a gasket over it, I say.

Cats are traditionally viewed as fastidious, clean, and smart. They are none of these things. They are just snobby idiots. Imagine every dog you've ever met – now give them the personality of Regina George. That is a cat. Things my cats have eaten and shat/vom-ed back up include: Each other's hair, corn, a nickel, and popped balloons, for starters. Cats, that is to say, are nasty as hell. I bought a spot cleaner for my carpets and it changed my life. Well, improved it. My cats are still monsters. One recently the entire left leg of a fake crow I bought for Halloween. There's only so much you can do.

7. Do Not Become Paranoid

Your cat is not out to get you. Your cat did not "do that on purpose". If your cat batted your boyfriend's balls, he is not trying to "steal your man". Cats may be dicks, but they are also animals and incapable (much though it might appear otherwise) of plotting world domination.

8. Never Have Just One

I'm running the risk of being called a crazy cat lady for this one, but it's necessary: If you have a cat, get another cat to be his friend or arch enemy. Cats may like their alone time, but they also like their having-a-friend time (don't we all?) Get your cat a buddy. The Vines practically shoot themselves.

Treat your cat like that one, impossible roommate and your life will be so much easier. You'd never yell at your roommate for pissing on the floor. You'd be all "dude, what the hell?" Though, admittedly, you'd make them clean it up which is something you can't do with cats. If you treat your home as a place you share with your cat, rather than the kingdom over which you rule you are sooo much more unlikely to have to worry about a bloody coup led by Mittens.