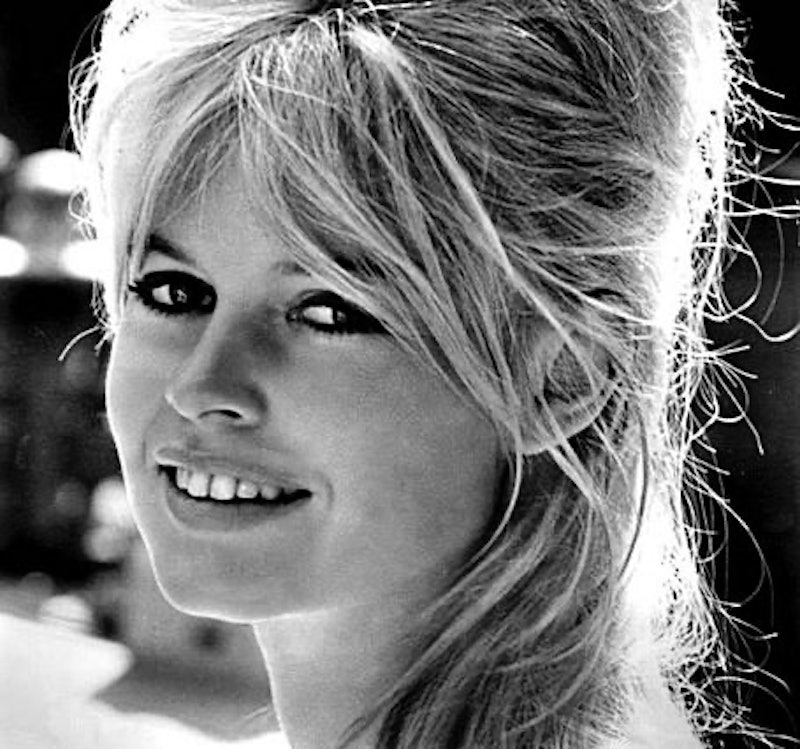 Classic film star and constant hairstyle reference Brigitte Bardot has yet again run into an instance where she needs to check herself. In a recent interview, Brigitte Bardot claimed that she "hates feminism" despite being heralded as a prototype of the liberated woman for all those years in the '60s. Bardot has had seriously questionable views over the years, and this is just another piece of information to add to her rap sheet.

In an interview published on Nov. 1, Bardot, now 80, discussed her career, activism, and childhood with the Daily Mail. Liz Jones, for the Mail, asked Bardot if she's a feminist, and she responded, "No, I hate feminism. I am a masculinist." Trying to get Bardot to expand on her ideas, Jones asked a follow-up question: "Do you think the feminist fight is too insular, that women should be campaigning for other just causes, such as animal welfare?" to which Bardot replied "I think that women do what they want." Ohhh, Brigitte. That's not an answer.

Given the fact that she's established herself as a bit of a bigot in the past on multiple occasions, it's unsurprising that she holds such reductive views about feminism. Back in 2008, she was fined 15,000 Euro for a screamingly racist letter she sent to Nicholas Sarkozy, the French prime minister, claiming that Muslims were "destroying our country by imposing their ways." In 2004, Bardot was fined for "inciting racial hatred" with her book A Cry in the Silence. As BBC reported, "The book also contained a section attacking what she called the mixing of genes and praised previous generations who, she said, had given their lives to push out invaders."

While Bardot doesn't seem to like such a large percentage of the world's population very much, she's been a zealous animal rights activist for years. In 1986, she founded the Brigitte Bardot Foundation for the Welfare and Protection of Animals. For someone who holds animal liberties in high regard, you'd think they could take a moment not to be horrible to humans.

Even if the "sex kitten" or "sexually enlightened women" roles she played were heavily fetishized and male-gazey, one could easily argue that the second wave of feminism had a great deal to do with the amount of critical attention she received. Simone de Beauvoir, called the actress a "locomotive of women's history" in her 1959 essay "The Lolita Syndrome". In a 2009 article in The Guardian, Agnès Poirier points out that Bardot's characters flouted popular female prescriptions of "proper behavior" at the time. Rather than a passive wife or a doting mother, these characters were out to fulfill their own desires and ambitions.

As a figure, the actress may be considered a totem of the changing social mores and female sexuality at the time, but star's persona shouldn't be interpreted as personality. Hannah Ongley from Styleite makes a great point, cautioning that "Bardot's statements should be taken as a warning of the dangers of confusing a woman and a woman’s image." While Bardot's personal politics are beyond disappointing on multiple levels, maybe these circumstances can teach us to be a bit more critical about the way that the pop culture distills women (and men) to symbols.