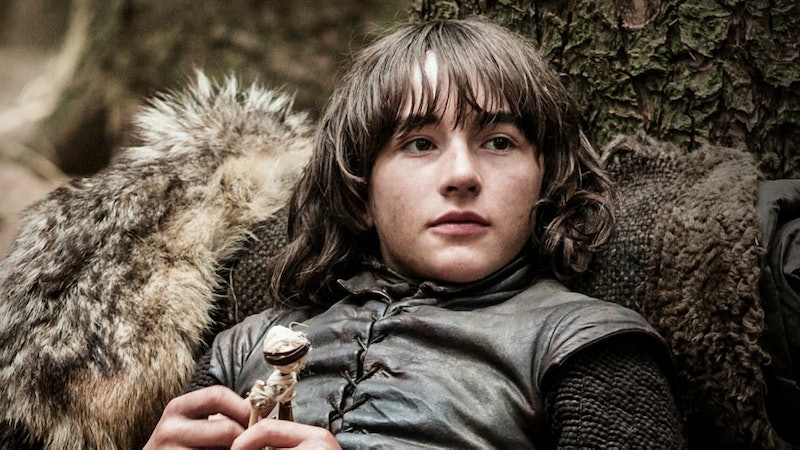 Though we knew that Bran Stark would be missing from season 5 of Game of Thrones thanks to an interview that actor Kristian Nairn, who portrays Hodor in the series, gave this past September, the reason hasn't really been clear. Yes, Bran has been relatively absent from the main storyline due to his detachment from most of the other (or should I say remaining?) Starks, but occasionally seeing him hanging out with Hodor, having visions and stuff has been pretty comforting — after all, the Starks are all dying out so quickly, it's nice to know that Bran and Tommen are still kicking it out in the wilderness. However, after reading the new interview that GoT producer David Benioff gave to EW about Bran's absence, I gotta say, the reason does make sense:"It made sense to stop [Bran's story] where we did," Benioff told EW . "Ideally that wouldn’t have gotten out and it’s unfortunate it did...the fact is, even though we’re making changes to the books and adapting as necessary, we’re trying to keep the various storylines the same as the books and trying to keep them roughly [chronologically] parallel. And last year we caught up to the end of Bran’s storyline [in George R.R. Martin’s most recent A Song of Ice and Fire novel, A Dance with Dragons]. So if we pushed him forward this season, then he’s way ahead of where the other characters are." See, he has a point. If Bran's storyline were to progress at the same time than everyone else's is, then not only would it take valuable screentime away from storylines that do need to be condensed, but it would put Bran ahead of everyone else — then he would need to be omitted from episodes anyway. This way, if his storyline can progress off-screen relatively easily, it makes sense to just let the spotlight shine on other characters until everyone is at the same point in their stories.Luckily, this seems to be the case: Unlike the Lady Stoneheart storyline, which would have been amazing to see on the show if (spoiler alert!) Michelle Fairley was available to return as a zombiefied Catelyn Stark, much of Bran's storyline in the upcoming season would have been filler, according to Benioff — so it's better left off screen anyway. "He’s now entering a training period which is going to take quite some time, much of which isn’t particularly cinematic. So rather than being stuck in a cave for a year, we figured it would be interesting to leave him out for a little bit."The only thing I'm really concerned about at this point would be the actual actor aging too much off screen — after all, Isaac Hempstead-Wright is about 15 now, so the next time he films GoT he's going to be 16. It's not a huge jump, but teenagers can change drastically in the span of one year. Next time we see Bran, will he have pulled a Luke Dunphy of Modern Family and grown about a foot taller between seasons? WILL SEASON 5 BE THE SAME WITHOUT HIM?!Sigh. At least this means more screentime for Arya and her fabulousness.