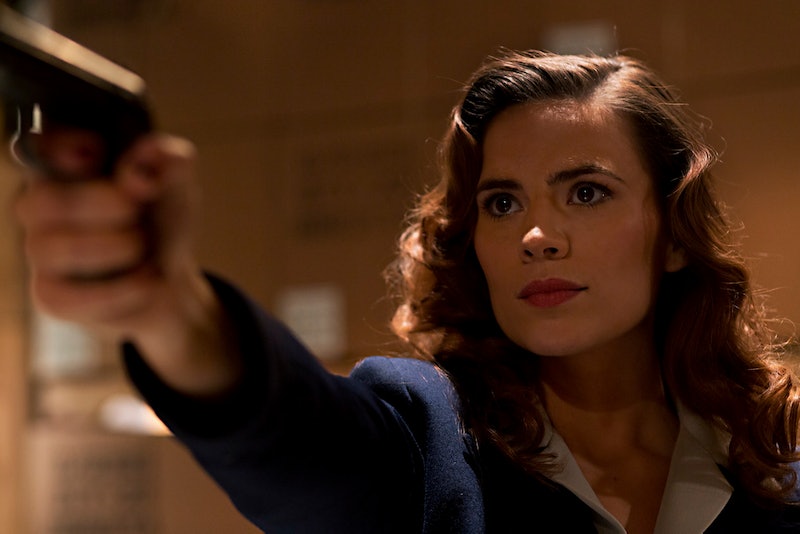 Agent Carter's one of Marvel's many long-time-comings, and now it's about to actually get its chance to see the light of day: ABC's finally set Agent Carter 's midseason premiere date. Mark your calendars for Tuesday, Jan. 6. Peggy Carter's coming for ya.

This Halloween I found myself wandering around West Hollywood touristy spots with a visiting friend. We made our way over to Greyston Mansion, the very cool-looking manor and park that's served as the set for fictional structures like Chilton in Gilmore Girls and Xavier's School For Gifted Youngsters in X-Men . A crew was setting up things as we were walking around, and we asked what was about to be filmed there. "Oh, uh, that new Marvel show....Agent Carter," a crew member told us. "They're filming eight episodes here."

Agent Carter will explore the work of title character Agent Peggy Carter (Hayley Atwell), whom MCU audiences were introduced to in Captain America and who'll be playing a very key role in the establishing of SHIELD. That makes it a perfect midseason replacement for Agents Of SHIELD for obvious reasons, and it also makes me suspect that I accidentally stumbled onto either the site of the first SHIELD headquarters, Howard Stark's home, or both.

I kind of can't wait to see what this show has in store for us, even if ABC's making some odd (read: stereotypical) decisions with their promos so far: