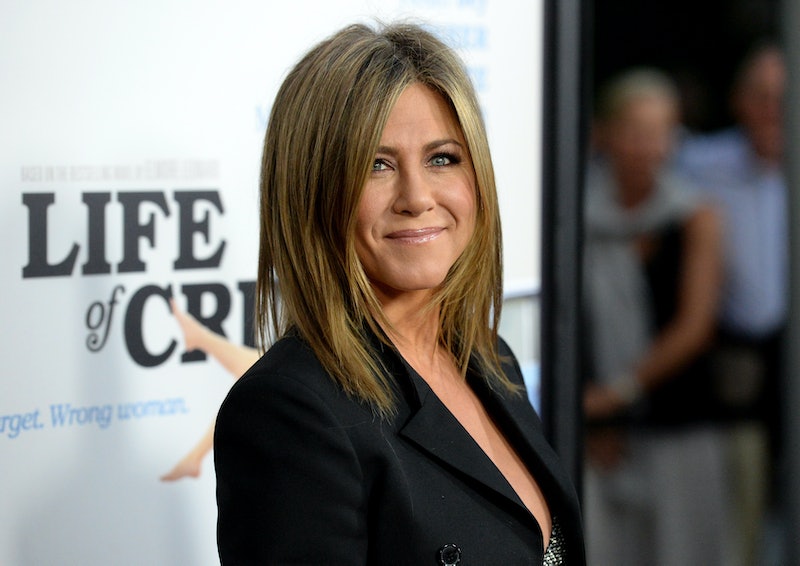 Jennifer Aniston will forever be known for her work as the beloved Rachel Green on Friends; for her signature straight, perfect hair and its many styles; and, probably, for her split from Brad Pitt. That could all change with one role, as Jennifer Aniston happily wore no makeup for her gritty and decidedly real role in the upcoming indie film Cake. The down-to-earth star, known for a classic and not trendy style, called ditching all of the products and processes that normally go with filming "so fabulous, so dreamy and empowering and liberating." In the film, Aniston plays a woman who survives a car accident but is left with scars all over her body and it's already generating Oscar buzz. Go, Jen!

Aniston, who is aging gracefully and looks even better at 45 than she did at 25 is lovely, pretty, and insanely relatable. I'm completely infatuated with her and everything she does.

The actress and hair icon spoke about her physical transformation for the role, which meant no sleek, glossy strands framing her face and no veil of makeup. Granted, you won't catch Aniston with a heavy smoky eye or a "look at me" matte crimson lip on the red carpet or while running errand. She tends to sticks to a low-key makeup regimen, usually favoring sparkly shadow, a generous dusting of bronzer, and nude-peach or pink gloss. She's pretty classic that way.

Still, Aniston was happy to not have to deal with all that noise as she stepped into her role of Claire Simmons for this film. That's brave, since film cameras and set lighting can be unforgiving.

Aniston, who showed off way impressive, anti-Rachel acting chops in the 2002 indie The Good Girl alongside Jake Gyllenhaal, said that "I was ready to disappear" when she read the script for Cake. Indeed she did — everything we know and are familiar with when it comes to Aniston disappeared.

Aniston, who co-owns Living Proof, a luxe hair care line, and who reps Aveeno skincare, admitted that the only time she had to be in makeup for her role was when the scars had to be created and applied.

It's pretty common knowledge that the Academy loves when actresses either physically transform themselves, get raw, shift the focus away from their looks, get ugly, or at least largely makeup-free, for a role. Think Charlize Theron in Monster or Marion Cotillard in La Vie en Rose. It sounds like Aniston's work in Cake allowed her to lose herself in her role and focuses on the performance, not her looks.