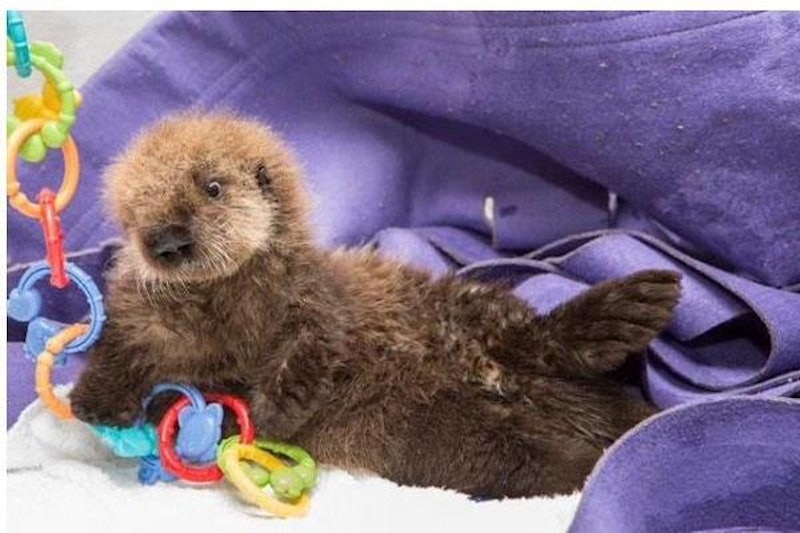 See that adorable ball of fuzzy wonderfulness? That's a baby otter. She's five weeks old, and she doesn't know how to swim yet, because she was found four weeks ago, stranded alone on a beach. She hasn't got an official name, but for now, she's referred to as "Pup 681," and she's learning to be an otter. Like, a fully-fledged one, that can swim on her own and stuff. And it's pretty much the best thing you or I will ever see.

"Pup 681," who some call Eleanor, some call Mitzy, but everyone agrees is the cutest thing to ever be caught on camera, and that's including AlexfromTarget, has just moved to the Shedd Aquarium in Chicago. She was found in late September, abandoned and alone at only one week old, on a beach in California, between San Mateo and Santa Cruz. She was tiny, and fragile, and weighed only two pounds. Thankfully, a local heard her tiny otter cries — yes, those are a thing, and they're weird but still adorable – and called a conservation center, who discovered she was part of a threatened Southern sea otter subspecies.

Now, at Shedd Aquarium, she's being taken of by a full team of experts, eight of them, in fact. She's being fed, and groomed, and taught to swim. She gets her own pool to practise in, and now weighs 6 pounds. She's pretty much like your favorite childhood cuddly teddy bear, if your bear were crossed with a puppy and learning how to chill in a pool.

She's so tired and small that sometimes she'll fall asleep in the middle of a lesson — I know, right? Can't you just feel your heart melting? — but she's gained several pounds and is doing great. Said Christy Sterling, assistant supervisor of penguins and otters at Shedd, to the Chicagoist:

They need a lot of intense care, attention, feedings every couple of hours or so.We help her groom because when she comes out of the water, her fur can be really wet, and that is how otters stay warm with really dense insulated fur. She's also really young so she'll help us out and try to learn but sometimes she just falls asleep because she gets really tired.

And in case you needed any more adorbs, Sterling added:

Right now we're watching her all the time when she is in the water because since she is still so young, she still is just learning how to come out [of the water] so we've got a little ramp for her.

JUST LOOK AT THAT LITTLE FACE:

More like this
25 Things I've Reduced My Life To, In Addition To WFH In My PJs
By Ginny Hogan
So Many Dog Owners Are Obsessed With These Weird Dog Products
By Veronika Kero
Amazon Keeps Selling Out Of These Pet Products With Near-Perfect Reviews
By Madison Barber
The 7 Best Cat Litters For Odor Control
By Erica Gerald Mason
Get Even More From Bustle — Sign Up For The Newsletter