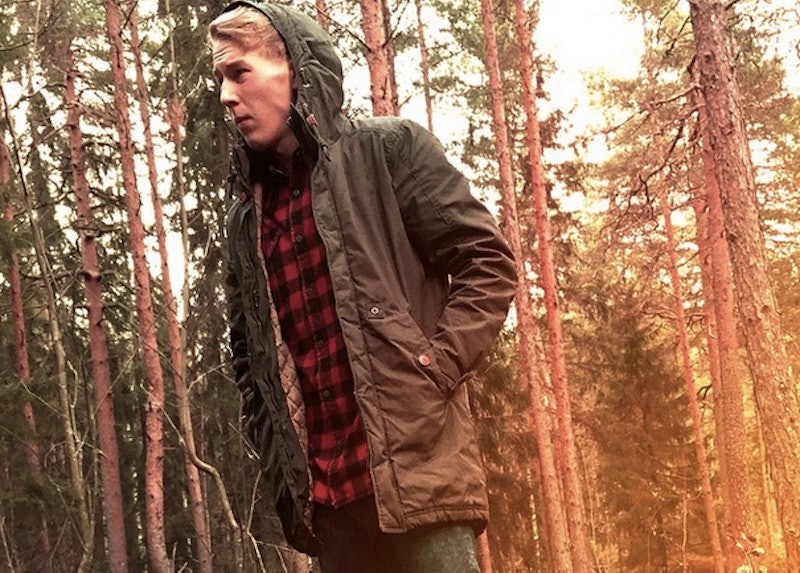 Remember when everything was about the metrosexual — you know, straight dudes who actually care about things like personal hygiene and wearing un-wrinkled button downs? Yeah, that trend is dead in the water. 2014 is the year of the lumbersexual , or the dirty hipster who dresses kind of like a lumberjack to sip PBRs at a bar in Williamsburg rather than, you know, turn trees into lumber.

Here's the definition, according to GearJunkie:

Today, the metrosexual is a disappearing breed being quickly replaced by men more concerned with existing in the outdoors, or the pseudo-outdoors, than meticulous grooming habits. He is bar-hopping, but he looks like he could fell a Norway Pine.

He looks like a man of the woods, but works at The Nerdery, programming for a healthy salary and benefits. His backpack carries a MacBook Air, but looks like it should carry a lumberjack’s axe.

He is the Lumbersexual.

So, how does an unsuspecting female or dude-loving dude out in the wild, wild tundra of Bedford Avenue spot the lumbersexual? There are some tell-tall signs that help separate this fake outdoorsman from his other hipster-y counterparts. I care about your future, so I'm going to share those signs with you.

Introducing the Field Guide to the Lumbersexual.

Sure, not every guy sporting a well-worn flannel is a full-on lumbersexual. He could simply be a MetroJack (GearJunkie's word for someone who's "not fully embracing the full lumber in Lumbersexual"), or a man not strong enough to resist the pillowy softness of a good flannel — because really, who is strong enough for that? However, the flannel could indicate lumbersexual tendencies, especially when paired with the following items.

The guy who wears work boots to stand around at a house party on a Saturday night probably has a lumbersexual streak, even if the rest of his outfit is pretty average. If you can't see any scuff marks, you can almost guarantee his shoes have never seen an ounce of actual "work."

A lumbersexual will almost always be rocking some sort of facial hair, but unlike a real lumberjack, his beard/mustache combo is likely to be just a little too perfect.

5. Definitely none of this:

Absolutely none. Put down that chainsaw! Chainsaw-wielding is unbecoming in a young gentleman, and besides, now you only have one hand with which to sip that PBR.

More like this
Phoebe Dynevor Serves ‘Bridgerton’ Underboob In Stunning Floral Gown
By El Hunt
These 3 Signs Are The Master Chefs Of The Zodiac
By Kristine Fellizar
Gigi Hadid Gave Up One Surprising Thing After Having A Baby With Zayn Malik
By Alyssa Lapid
Katy Perry Regrets Not Working With Billie Eilish On “Ocean Eyes”
By Alyssa Lapid
Get Even More From Bustle — Sign Up For The Newsletter
From hair trends to relationship advice, our daily newsletter has everything you need to sound like a person who’s on TikTok, even if you aren’t.