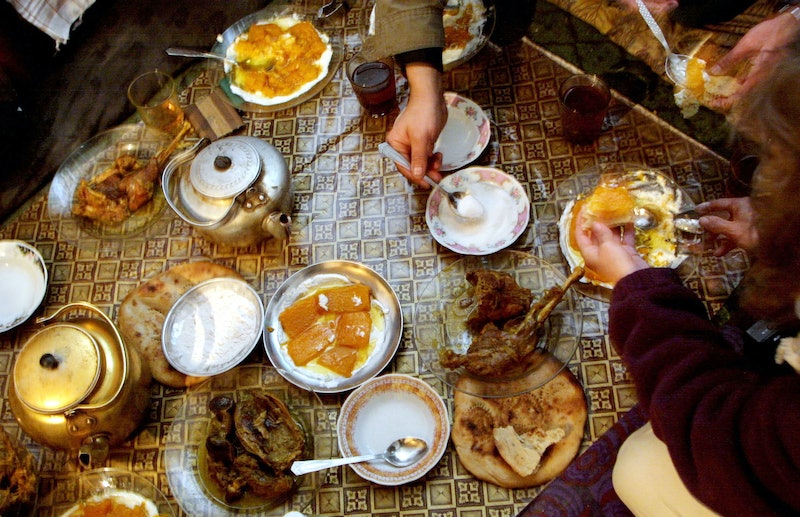 Here we are again: Time for holiday cooking, Thanksgiving feasts, and a lot of hours spent staring into space and wondering why the hell you volunteered to cook turkey and stuffing for 14 friends. If you’re freaking out about pecan pie and sausage and vegan creamed kale, you can relax. Or, at the very least, you can distract yourself by reading a bunch of food memoirs.

Some people adore slaving away over a hot stove or a Dutch oven that was passed down to them from their great-great grandmother Ethel. Others feel like they deserve a Michelin star when they successfully make a fancy croc-pot meal. Then there are the haters — the ones who are “allergic to cooking,” who “can’t even make peanut butter and jelly,” and who are so quirky they store their passports and sweaters in the oven of their Manhattan brownstone. That's adorable if you're a character in a TV show, but come on now. It’s not that hard to make a sandwich.

In honor of Thanksgiving, here are 14 food memoirs written by starred chefs, award-winning essayists, and feared food critics that might just help you get over your mageirocophobia (aka fear of cooking). It’s a thing.

Four Kitchens: My Life Behind the Burner in New York, Hanoi, Tel Aviv, and Paris by Lauren Shockey

If you like your memoirs packed with self-discovery and gritty food details, this is your book. It’s a behind the scenes look at Shockey’s experience working as an apprentice in four high-end restaurants around the world in New York, Hanoi, Tel Aviv, and Paris. There’s humor, drama, adventure, and shallot mincing. It’s also about the passion that goes into home cooking — and there are recipes throughout the book that might just inspire you to nix the pre-made stuffing and canned cranberries and actually make something this Thanksgiving. Even if that something is as simple as a lettuce and tomato salad.

Blood, Bones & Butter: The Inadvertent Education of a Reluctant Chef by Gabrielle Hamilton

How great is this title? Hamilton weathered two hard-living decades trying to figure out her purpose in life before she opened the internationally respected NYC spot Prune — feared New York Times food critic Frank Bruni called it “a small restaurant with a large footprint.” The book traces Hamilton’s reluctant culinary education, from the six-burner stove of her childhood to the kinetic kitchen at Prune. You might not learn how to baste a turkey or stuff a turducken, but you will get fired up about food.

Devil in the Kitchen: Sex, Pain, Madness and the Making of a Great Chef by Marco Pierre White

This one is a memoir about a working-class kid in Leeds going on to become one of the world’s first rock star chefs in the 1980s. White was the first British chef to win three Michelin stars — and the first chef to ever give them back. He was an enfant terrible before Anthony Bourdain or Gordon Ramsay busted onto the scene, he trained Ramsay and Mario Batali, and his story is so dramatic that Ridley Scott is turning it into a movie. If it’s wild enough for the guy who directed Alien and Blade Runner, you know it’s a good read. Don’t start hurling cast iron skillets and spatulas at your holiday guests after you read the book, though. Unlike a celebrity chef, you probably won’t get away with it.

Tender at the Bone: Growing Up At the Table by Ruth Reichl

Reichl was a restaurant critic for the New York Times and the LA Times before she became the head of Gourmet from 1999 to 2009 — so she’s a woman who knows how to write about food. She’s written several books, and this one is about the ways a passion for food can alter and enhance your life. You’ll also get some recipes, along with some pretty funny anecdotes. “My parents entertained a great deal,” writes Reichl, “and before I was ten I had appointed myself guardian of the guests. My mission was to keep Mom from killing anybody who came to dinner.” I’m sure some of you out there can relate.

Anything That Moves: Renegade Chefs, Fearless Eaters, and the Making of a New American Food Culture by Dana Goodyear

Goodyear’s memoir just came out in paperback, and it’s funny, bizarre, and entertaining as hell — but it might not make your mouth water (unless you’re hungry for “sarcophagid maggots in baths of grapefruit, lemon, lime, and pomelo juice”). Goodyear takes a look at the strange, exotic — and some might say deviant — food trend that includes the aforementioned maggots, raw horse fat, and tarantulas. The New Yorker writer has taken a page from Andrew “Bizarre Foods” Zimmerman, but her book isn’t just about the gross-out factor. It’s funny, but she also goes deep and delves into culinary history and trends. If you’re the adventurous type, this one’s for you. Please don’t try the recipes at home, though. Especially on Thanksgiving, and especially if I'm coming to your house.

My Last Meal: 50 Great Chefs and Their Final Meals / Portraits, Interviews, and Recipe by Melanie Dunea

This one isn’t technically a memoir. It’s a coffee table book, but it’s a fun one to pull out on Thanksgiving or at your next dinner party or on a random Tuesday night when you’ve had too much Malbec and you want to fantasize about your last meal on earth. Every page profiles a famous chef who answers the questions: What would your last meal be/what music would be playing/who would be there/where would you be? The photography is amazing, the recipes sound delicious, and the answers are fascinating. Plus it looks fancy sitting on a coffee table.

Every food-lover and food memoir aficionado should have this one on her shelf. Superstar chef/writer/traveler Bourdain penned this bestseller back in 2000, and if you’re into the dry, slyly funny, no BS style that makes his shows (No Reservations and now CNN’s Parts Unknown) so great, you’ll probably speed-read this one. Vegans and vegetarians beware: “Vegetarians, and their Hezbollah-like splinter faction, the vegans… are the enemy of everything good and decent in the human spirit.” This one might be better for the carnivores out there.

Heat: An Amateur's Adventures as Kitchen Slave, Line Cook, Pasta-Maker, and Apprentice to a Dante-Quoting Butcher in Tuscany by Bill Buford

Buford ditched his job at The New Yorker and threw himself into the trenches at Mario Batali’s restaurant Babbo so he could fulfill his longstanding desire to see what it’s like to work in a busy, insane, high-intensity kitchen. He then travels to Italy and learns neat tricks, like how to slaughter a pig. Read this one if you want to add some Italian flavor to your Thanksgiving meal. Maybe pumpkin tiramisu, or gnocchi instead of mashed potatoes. Scratch that — you should make gnocchi and mashed potatoes.

Born Round: A Story of Family, Food and a Ferocious Appetite by Frank Bruni

Bruni was the chief restaurant critic for the New York Times and during his reign of terror he struck fear into the hearts of chefs and restaurant owners all across Manhattan. I know because he came into a sushi place I worked at near Union Square and we were all so terrified we stood at attention like robots until he left. And then we drank and prayed for a good review. Anyway, his memoir is funny, entertaining, and how can you not like a guy who calls his book Born Round? It comes from a saying his grandmother loved: “Born round, you don't die square.” It’s about a passion for food and the difficulty of harnessing that passion. Maybe it’ll keep you in check if you’re about to head in for your sixth helping of pumpkin tiramisu and gnocchi.

The Man Who Ate Everything by Jeffrey Steingarten

Lawyer turned James Beard award-winning critic Steingarten is hilarious — his Vogue pieces (like the recent “A Vogue Editor Cooks With Pot”) are always funny, entertaining, and clever. This is a guy who can make a story about yogurt or alfalfa sprouts read like a hard-boiled thriller. This one will make you laugh, and it’ll make you hungry. He eats his way through Japan, Italy, and France, and he’s generous enough to throw in some recipes. When you finish the book, dig out his Vogue essays. They’re definitely more interesting than reading about the latest mascara trend on the Paris runways.

Child is the diva of the kitchen, the O.G. celeb chef, the high priestess of Beef bourguignon. We all know Julie & Julia, but My Life in France is told from Child’s point of view, and it chronicles her years living in France with her husband, taking classes and struggling with instructors at the Cordon Bleu, getting rejected by publishers, and finding her passion for teaching others to cook. Is it sacrilegious to make a French meal for Thanksgiving? Can you Frenchify a turkey? Throw in some Herbs de Provence and serve a (cheap-ish) Sancerre and… violà!

Toast: The Story of a Boy's Hunger by Nigel Slater

Food can be a powerful reminder of the past, and British food writer Slater traces his childhood through the foods his family cooked, ate, and longed for. You’ll get a tour of his family’s pantry (rice pudding, tinned ham, crispy brown bread, cream soda, mince pies, lemon drops, bourbon biscuits) and a peek into his life growing up in the West Midlands city of Wolverhampton, England (if you’ve read Caitlin Moran’s How To Build a Girl , you know the place). It was made into a TV movie with Helena Bonham Carter and Freddy Highmore back in 2010.

Serve It Forth (Art of Eating) by MFK Fisher

If you’re in the market for some old-school food writing, this one was published back in 1937. W.H. Auden called Fisher, “The best prose writer in America.” John Updike said she was a “Poet of the appetites.” Julia Child herself anointed Fisher “A monument.” How’s that for props? This one is like a travelogue through culinary history, from Greek and Roman times to, well, her own time. You’ll learn fascinating food factoids like Catherine de Medici, who was lonely for home cooking, stated a culinary revolution by bringing Italian chefs to France. Rebel! You’ll learn, your stomach will growl, you’ll be inspired to cook (or just eat) a ton of food on Thanksgiving.

Novelist and poet Kingsolver turns to food memoir here, and tells the story of her family’s experience ditching processed food and chain stores, going off the grid, and living off the land. Maybe you’re sick of HoneyBaked Ham and Costco pies. Check this one out and see if it inspires you to go off the grid and raise some turkeys of your own.