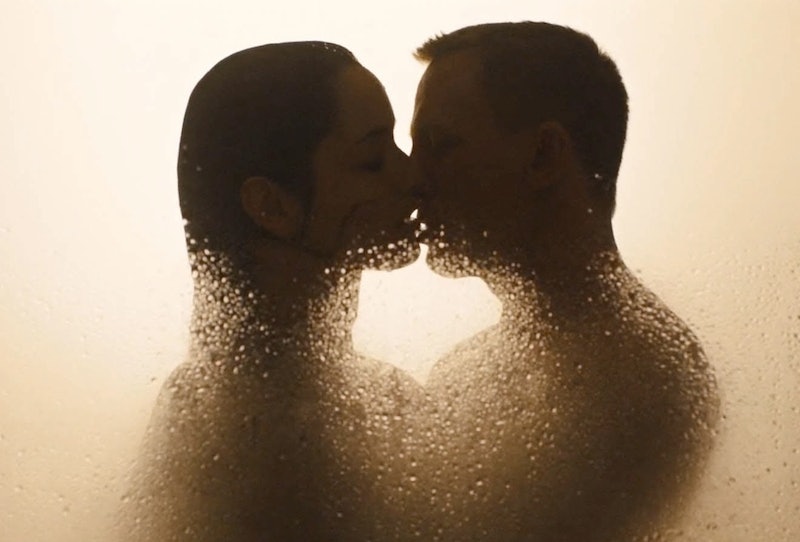 Having sex in the shower is hard (*wink*). The idea of it is hot as hell, but the expectation and the reality are often completely different. In your mind, you'll be showering in full makeup, mascara completely un-smudged, standing so your back is arched perfectly and subtly to reveal a pert apple of a butt. You partner enters, his abs glistening slightly from the steam in the room. He joins you in the shower and slides easily into you from behind, and the water beats down on you, but not enough that it goes in your eyes and makes you look squinty, as if you'd got temporary pink eye. This is the dream. This is not, in fact, what shower sex ever turns out to be.

The reality is you're slipping and sliding around the place like an oily whale, trying to reconcile the discrepancy in height between you and your partner by ungracefully bending over, and taking in so many lungfuls of water you think you might drown. And how the hell are the police going to explain to your mother that you died trying to get laid in the shower? Add to that small showers, dirty showers, cold showers, showers with low water pressure, showers with high water pressure, etc. etc., and you'll find that sexy shower time is something you really have to WORK for. The first step is letting go of the idea that James Bond is going to appear from nowhere to fuck you like you're in a romance novel.

All that being said, sex in the shower can be fun, it can be sexy, and it can be extremely rewarding. (And to be honest, I was really exaggerating the possibility of death, anyway.) Here are nine pieces of advice from me, who has successfully had sex in the shower in maybe three out of five attempts (which is a solid ratio in my mind), about how you can have sex in the shower with the least amount of risk and the most amount of dignity.

There's water in the shower. That's the sexy part. It's like being in your own personal at-home waterfall. Except next to a toilet, probably. I guess animals pee in the wild, so there's probably a toilet of some kind near a waterfall, too. ANYWAY. The point is that if you're worried about getting your hair or face wet (because you're wearing makeup), then don't even bother with shower sex, because you're going to make it even more awkward than it already is by dodging the water. The whole point of shower sex is to get wet, and be wet, and have sex while wet. Otherwise, you should just have sex somewhere where it's not wet.

2. Make Sure It's Warm When You're Not Under The Water

The worst is when it's perfectly pleasant and warm under the water and you're getting your sexy on, only to find yourself momentarily removed from the water and FREEZING TO DEATH. Shivering while you're trying to get your freak on is a distraction that's going to really kill the mood, so make sure the room is as steamy and warm as the water flow (TOO. MANY. VAGINA. PUNS.)

I mean, unless you live in a sitcom in which everyone laughs when you slip and slide all over a shower and all over your partner, you should probably rinse yourself clean of any lather before you try any sex moves. The shower is already slippery enough as it is, and two soapy bodies trying to connect might as well be covered in oil for how little friction you're going to have between you.

I feel like there's a lot of danger in shower sex. Mostly the danger of falling over and being horrifically maimed. Try to use the shower around you when you're having sex. Don't just rely on balance like you would while having sex in a dry place. If there's a ledge or a bath edge, hold onto it. Having only your feet and your partner's feet on the ground can be a recipe for disaster, so don't be afraid to lean on things. Just make sure what you're leaning on is sturdy; putting your weight on a soap holder and subsequently ripping it out of the wall is not a Bustle-sanctioned sex move to please your man.

Having sex in the shower is usually going to involve two people of disparate heights standing up and trying to make their genitals fit. It's going to be weird, your body fat is going to roll up in little pockets that you didn't even think existed, and it's probably going to be as undignified as the part in your wax where the beautician asks you to lay on your tummy and pull your ass cheeks apart. Try to be creative with your bendiness. Touch your toes, lift one leg over your partner's shoulder, try and hold yourself around someone else's hips with the strength of your legs. Being a practicing yogi will come in handy during shower sex, that's for sure.

If you're not flexible, then consider the lazy shower fucker's option, and whether you have enough space just sit down in there.

I have an irrational fear of breaking a man's penis. I don't know for sure if those horror stories you hear about dudes breaking their penises during sex and blood spurting everywhere are real, or if they're the male equivalent of not knowing you're pregnant and one day accidentally birthing a baby when you think you're just straining to poo, but the idea is still terrifying to me.

8. Remember: You Are Not In A Toni Braxton Music Video

You are not Toni Braxton. There is no Tyson Beckford. You are just two average-looking drowned rats attempting to make your privates go together. Once you accept the fact that this is going to be ugly, clumsy, and demanding of a lot of core strength you probably don't have, then you can really start to relax and enjoy it.

9. There's No Shame In Quitting