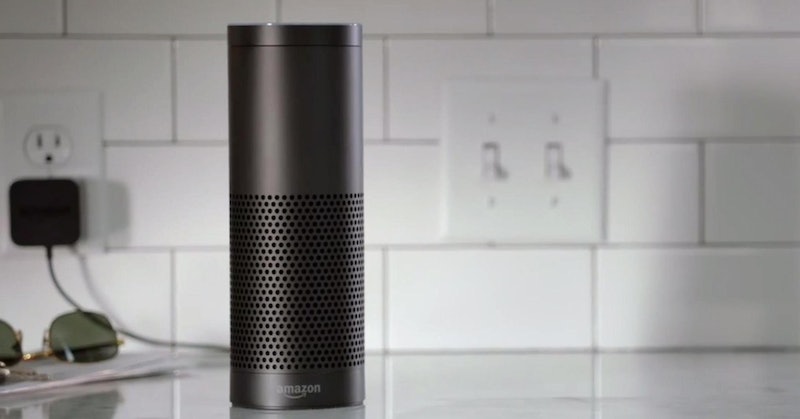 If you're tired of hearing Siri's voice, you're in luck — there's a brand new automated voice on the market. It's called Echo, which pretty much sums it up. Amazon announced its Echo device on Thursday, and it's already... confounding potential consumers. What does it do, exactly? And why do we need it?

Here's a rundown on the new electronic: Echo is a 360-degree speaker that's controlled by your voice. According to The Verge, the modest cylinder speaker has seven microphones, so it can pick up the sound of your voice from anywhere in the room — even when its playing your favorite jams. The microphones use sensors that have beam-forming technology, enabling them to hear you over your Taylor Swift "1989" album.

The Amazon Echo product page adds that the device is always on. All you have to do is say the word "Alexa," which Amazon says is the device's "wake word," and it begins working.

Perhaps the eeriest aspect of Echo is its A.I. mechanism. Much like Siri, Echo is probably a lot smarter than you. It knows the weather forecast for this weekend, the height of Mount Everest, and how to spell antidisestablishmentarianism. It'll keep track of your grocery list, tell you what you have to do today, and make sure you get up in the morning.

Echo even comes equipped with corny jokes like, "I was wondering why the baseball was getting bigger, and then it hit me." (OK, so it's not the World's Greatest Comedian, but it's something.)

Echo's brain is in the cloud, running on Amazon Web Services so it continually learns and adds more functionality over time. The more you use Echo, the more it adapts to your speech patterns, vocabulary, and personal preferences.

Amazon officials told The Verge that Echo will be ready for shipment in "the coming weeks," but not everyone will be able to get their new robot friend. Currently, the speaker is only available for Amazon Prime customers, who can buy it for a limited-time special of $99 (Echo regularly costs $199).

Some tech junkies say Echo is less of a music-playing device, and more of a virtual personal assistant who knows way more than you do. However, some tech writers are doubting whether Echo could become the A.I. capability we always wanted. Writes Wilson Rothman in The Wall Street Journal:

We’ve seen version 1.0 helpers before. Siri, Cortana and Google. Now are all still works in progress, despite years of development. Amazon certainly has the cloud capability and R&D budget to do something interesting with voice-controlled assistants, but that doesn’t guarantee the Echo will be a bona fide home helper at launch.

Meanwhile, Darrell Etherington at Tech Crunch called the device "a tad baffling, but also intriguing." Although some may bill Echo as Siri 2.0, Amazon's new device has a higher ceiling for at-home A.I. capabilities. It might just run your home one day — or just enable you to order everything and anything from Amazon. Whatever happens first.

Until then, round up your tasks for your very own "Alexa" — she'll be plenty happy to do them.