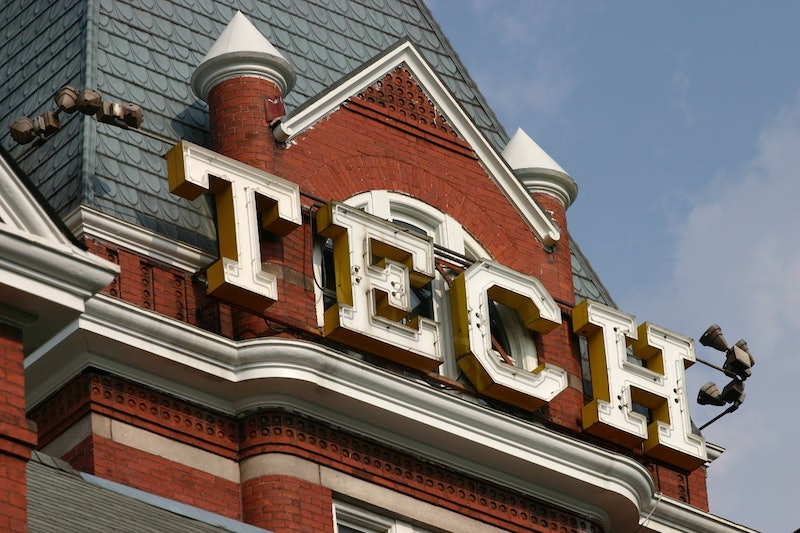 If anyone ever questions why I have major trust issues with fraternity brothers, you can tell them it's because they do things like send emails titled "Luring Your Rapebait." And in case that wasn't enough of a turn off, that rape-y attitude also seemingly results in actual sexual assault. Or so goes the story of Georgia Tech's Phi Kappa Tau fraternity.

The fraternity first got into hot water last year after a brother sent an email meant to help members with "luring your rapebait" — which understandably did not go over well once word of it leaked beyond the frat house walls. And if you thought the title was bad, the email went on to impart the following wisdom:

A short guide … the 7 E’s of HOOKING UP! 1. Encounter (spot a girl or group of girls) 2. Engage (go up and talk to them) 3. Escalate (ask them to dance, or ask them to go up to your room or find a couch, depending on what kind of party) 4. Erection (GET HARD) 5. Excavate (should be self-explanatory) 6. Ejaculate (should also be self explanatory) 7. Expunge (send them out of your room and on their way out when you are finished). IF ANYTHING EVER FAILS, GO GET MORE ALCOHOL. I want to see everyone succeed at the next couple parties.

I have only one word.

The member responsible for the email apologized profusely, saying that the email was an inside joke that he didn't pull off as well as planned and that didn't translate well to outsiders. He added that he understood why people were upset and that the incident had helped him understand, "that any sexual statement that is demeaning to women is never a joke" (emphasis in the original).

Overall, the apology sounds heartfelt and accepts responsibility. Still not an ideal situation, of course, but better than a lot of people react when confronted with their problematic behavior. So theoretically, everyone can move on, having become better people. But now two anonymous young women have come forward, filing separate lawsuits against Georgia Tech and the Phi Kappa Tau, each alleging that they were raped by the same fraternity brothers on separate occasions at the PKT house, one in the months following the "rapebait" email.

Again, this is why I have trust issues.

The student named in the lawsuit has already been expelled by Georgia Tech and the fraternity disbanded last spring due to a pattern of sexual violence. Still, both young women feel that the school and the national PKT organization were negligent about the dangerous, misogynistic culture that the house fostered.

And based on the evidence available, I'd say he has an excellent point.

Our society comes up with a lot of bogus for why rape happens — girls "asking for it," girls drinking too much alcohol, girls going places alone with a man — but the truth, of course, is that if any of those were really at fault, Saudi Arabia would have the lowest rate of sexual assault in the world. Instead they have one of the highest. Because the actual truth is that rape is more directly linked to misogyny and derogatory attitudes towards women than it ever will be to hem lengths.

Rape is more directly linked to misogyny and derogatory attitudes towards women than it ever will be to hem lengths.

And until we all accept that fact — and start demanding fraternity chapters change the culture of their houses — cases like this will continue happening. Because emails about "luring rapebait" are not just offensive; they're also signs of something very, very dangerous.