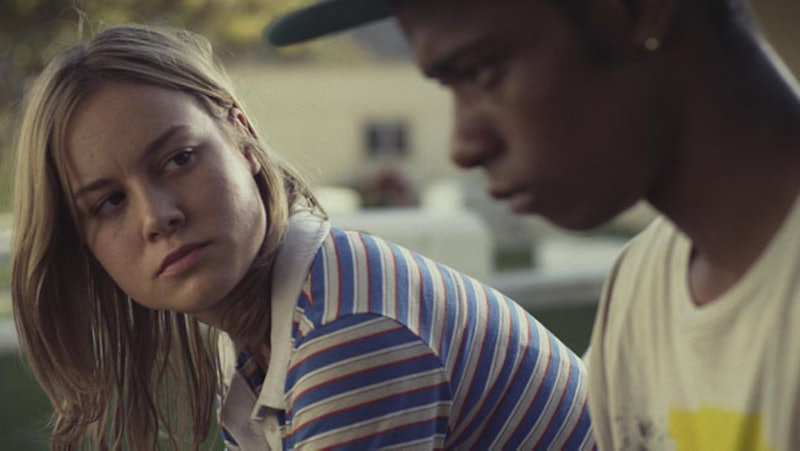 It might seem that the title of this article is a little presumptuous, seeing that it's only September, and besides, we've all heard about how 12 Years a Slave is going to win all the awards. Yet even if that's true, I stand by my claim: Short Term 12, a little indie movie from Deston Cretton (I Am Not a Hipster) about a group foster home, is the best-written, best-acted, and, quite simply, the best movie I've seen all year.

Some background: Short Term 12 is written and directed by Cretton, based on his short film about the same subject. It stars Brie Larson (The Spectacular Now) as Grace, a supervisor at a group foster home and John Gallagher Jr. (The Newsroom) as her co-worker and boyfriend, Mason, as well as an expansive supporting cast that includes Kaitlyn Dever (Justified) and Rami Malek (Ain't Them Bodies Saints).

When Short Term 12 premiered at the 2013 SXSW festival, it won both the Grand Jury Narrative Feature Award and the Narrative Audience Award. It then continued its winning streak, picking up awards at film festivals in Los Angeles, Nantucket, Maui and more. It currently holds a 98 percent on Rotten Tomatoes , making it one of the best reviewed movies of the year.

Yet chances are, you haven't heard of it. That's a real shame, because Short Term 12 deserves to become the kind of indie-film phenomenon that manages to win critics and find an audience, like Fruitvale Station or The Spectacular Now. It's a rare feat to accomplish, but I have faith. Short Term 12 is just too good, too honest, to stay under the radar for much longer.

Five reasons you need to see it:

As Grace, the guarded, passionate, empathetic supervisor of the foster care facility, Larson is magnificent. She brilliantly conveys every complex, contradicting emotion her character feels, going from fierce to vulnerable to open to frustrating with an ease rarely shown by any actress, let alone a 23-year-old one with only a few leading roles to her name.

Larson's Grace is wonderfully multifaceted, managing to constantly surprise the viewer even when we're sure we've got her all figured out. It's one of the year's most affecting performances, and hopefully, it'll bring Larson the critical attention she deserves. With Short Term 12, along with acclaimed supporting roles in The Spectacular Now and this month's Don Jon, maybe 2013 will finally be the year that Brie Larson gets noticed.

2. The supporting Cast Is Astonishing

Larson's performance is fantastic, but she's hardly the only cast member of Short Term 12 to watch. John Gallagher Jr. shines as Mason, whose patient kindness makes him a quality mentor to the teens, as well as a perfect compliment to the tough, cautious Grace, and Rami Malek makes his new, naïve employee sympathetic, despite some cringe-worthy first-day flubs. But it's the kids, the group of mind-blowingly talented teenage actors playing the residents of the group home, that show you what acting's all about.

Kaitlyn Dever, all of 16, gets under your skin the moment her character, Jayden, appears on screen. In another actor's hands, Jayden, a smart, sarcastic girl who uses an "I'm better-than-this" attitude as a cover for a painful home life, could be a cliché, but thanks to Dever, we've never seen anything like her on screen before. As Marcus, a moody, tough almost-18-year-old terrified to leave the facility, Keith Stanfield, is a revelation. It's unfathomable that Short Term 12 is his debut feature film, because Stanfield acts with staggering confidence.

There's Alex Calloway, as heartbreakingly fragile Sammy, Kevin Hernandez as Marcus' antagonist Luis ... each and every one of the young actors is worth spotlighting. There's not a single performance in this movie that's anything less than remarkable.

3. It Shines a Light on Foster Care

The topic of foster care is generally avoided by Hollywood, because, if keeping with realism, happy endings are few and far between. There are exceptions — ABC Family's The Fosters, for example, and, of course, Short Term 12, but mostly, it's a purposely unexplored subject. By avoiding it, though, filmmakers are doing more harm than good. More than 400,000 American kids are in foster care, a number only shocking because of its on-screen invisibility.

By refusing to talk about foster care, Hollywood is ignoring one of the country's biggest matters, and doing a disservice to children and adults everywhere who are, or have been, a part of the foster care system. Recently, The New York Times examined the issue, highlighting The Fosters, Short Term 12, and others for their realistic portrayals of foster care. We're still a long ways away from giving foster care the attention it needs, but movies and TV shows like Short Term 12 are making enormous strides.

4. It's Not Afraid to Make You Uncomfortable

Like I said before, complete, setback-free happy endings are rare in the real life foster care system. There are some success stories, of course, but many kids who go through the system struggle intensely before they turn around, if they even do. Short Term 12 ends on a positive note, but it makes a huge effort to show that it's not trying to idealize foster care. The teens in the group home have real problems, many of which can't be fixed in the short-term, despite Grace, Mason, and the other workers' best intentions.

Abuse, cutting, depression, suicide — it's all covered, but it never feels like a Lifetime original movie. Instead, Short Term 12 handles these issues with unwavering realism, even when situations arise that are bound to make viewers uncomfortable. If you feel frustrated when Sammy tries to run away again just because he wants to be caught, or angry when Jayden spits in Nate's face just as you were rooting for her redemption, that's exactly the filmmaker's point. Cretton wants us to see, hear, and feel it all, even if it hurts.

5. It's Honest, Brave, and Emotionally Raw

There is so much to praise about this movie, from the acting to the writing to the camerawork (handheld and shaky, but never irritating.) Yet hours after I left the theater, I found myself thinking not of those things, but of the film's unusual, unfailing emotional rawness. There are so many moments that hit you with their poignancy, that make you wonder how any filmmaker could make honesty so affecting. There is the astounding scene where Marcus performs a rap he wrote called “So You Know What It’s Like,” a stinging, accusatory poem about his "whore" mother and the idea of living "a life not knowing what a normal life’s like.”

There is the moving scene where Mason tells a funny, gross story about the time he pooped his pants chasing down a runaway teen, and the humor is cut off when Grace states, matter-of-factly, that the kid was found dead a few days later, because that's the real outcome to most of these stories. Every scene, every moment — none of it feels manufactured or forced.

Short Term 12 is astonishing because it truly believes, and succeeds in proving, that there's beauty in honesty.