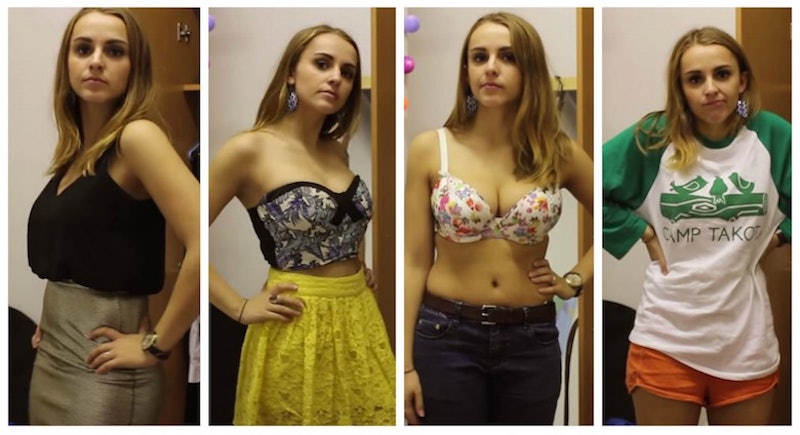 The word gets bandied about a bit, but have you ever stopped to wonder what the word “slut” actually means? YouTube sex and body image educator Hannah Witton certainly did — which is exactly what one of her most recent videos, entitled “Do I Look Like a Slut?,” addresses. In it, she asks exactly what it is that makes someone a “slut” — or just makes someone look like a “slut” — and tears the whole concept down in an absolutely brilliant fashion.

Witton, whose sex-positive work has gained the stamp of approval from such giants as Durex, graduated from the UK's University of Birmingham with a first in History; her focus is sexual history, so she really knows her stuff. The video, she explains, stems from this bizarre need we have to reassure ourselves that we don’t look like sluts. “What is so bad about looking like a slut that you want to disassociate yourself from that?” she asks. It gets even more interesting — and absurd — when she continues, “And what does a slut even look like? What is a slut?” Consider these four wardrobe choices:

“Does wearing any of these outfits make me a slut, or make me look like a slut?” she asks. She notes that the word is “usually associated with a woman’s sexual behavior”… but also points out that it’s basically impossible to tell how much sex a woman has based on the way she dresses.

Witton then took to social media to crowdsource the definition (or definitions, as the case may be) of the word “slut” — “So I could figure out whether I’m a slut, because lord knows, I get called one often enough,” she says. Here’s what she found:

According to Witton, the denizens of Tumblr were the most progressive in their views. In addition to the definition seen in this image, examples include:

The 140-character limit placed some restrictions on Twitter’s responses, but its users did, as Witton says, do their best. Examples include:

Facebook? Hoo boy. Apparently this is where the trolls live, which surprised me a little bit, as I would argue that Facebook is the least anonymous of these three forms of social media. The responses from Facebook also contain the largest number of grammatical and spelling errors. Examples include:

Witton also makes sure to point out, though, that not all of Facebook was that awful. Plenty of people also submitted definitions like this one:

The conclusion at which she eventually arrives is this:

“It’s my opinion that there’s no such thing as a slut. People’s sexual behavior is none of your business, and people can sleep with as many or as little people as they like — and that does not make them a slut, or a prude. It just makes them who they are, and that’s their choices, and it shouldn’t affect you. And we also can’t determine whether or not someone is a slut from the way they dress, because as much as you’d like to think it, there’s no correlation.”

Time views the video as proof that “nobody knows what ‘slut’ means,” but I see it a little bit differently. It’s not that nobody knows what “slut” means; it’s that everyone thinks it means something different, which ultimately makes it kind of meaningless. Either way, though, I think Witton is right: There’s no such thing as a slut; it’s nothing more than a weird, societal concept that probably needs to go the way of all things. Also, fun fact: Although the Oxford English Dictionary notes that the word’s origin is largely unknown, its etymology suggests that once upon a time, all it meant was a slovenly person with poor personal hygiene. So, y’know… just bear in mind that the next time you call someone a slut, you’re probably accusing them of not showering enough or something. Classy.

Witton ends the video by asking us simply to stop calling people sluts. She does acknowledge that there’s been a movement to reclaim the word in a sex-positive way, which in theory she thinks is a terrific idea; the trouble is, most people aren’t really using it that way, so its negative connotations are sticking around. If, she posits, we can educate people to stop using it in the negative way, then we can start using it positively instead. Clearing away the mess first might help us reconstruct it more easily and with a stronger foundation.

More like this
The 19 Best Tweets & Memes About Bisexual Awareness Week
By Lexi Inks
These 4 Signs Are The Seductive Sirens Of The Zodiac
By Brittany Beringer
Are Quality Time & Gift-Receiving Love Languages Compatible?
By Lexi Inks
On TikTok, "Cbat" Has Been Named The Worst Sex Song Ever
By Lexi Inks
Get Even More From Bustle — Sign Up For The Newsletter