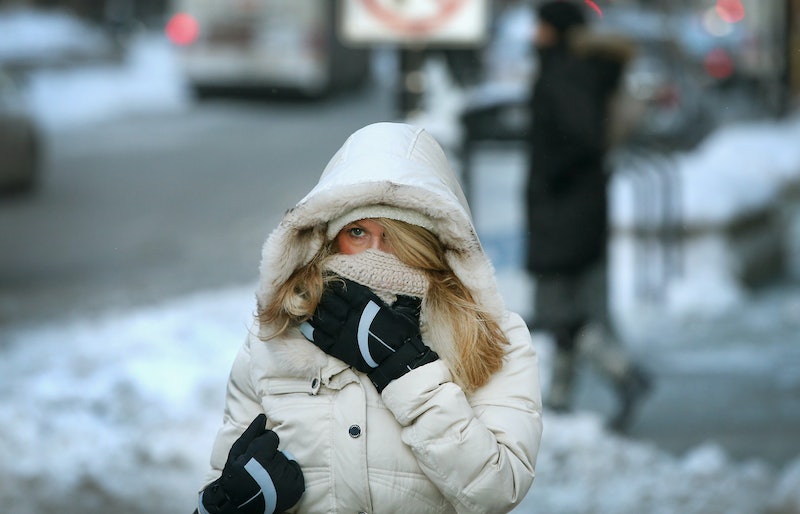 Dear God, no. Already? It may only be November — aka technically not even winter yet — but the polar vortex of 2015 is coming. Remember that nonsense from last year? I'm pretty sure four out of five Americans considered what life would be like on an organic lettuce farm in Hawaii. Well, that meteorological beast is back. Starting on Monday, a ruthless frigid front will rudely interrupt the fall for residents living in the northern Rockies and northern plains, the latter of which encompasses states like North Dakota, Minnesota, and Illinois.

Later in the week, New Yorkers will feel the chill too and become even more agitated than they already are. An estimated 200 million people will be affected by this new polar vortex — if the polar vortex were a company or government or anything tangible, we'd have long burned it to the ground.

Just a refresher course — in case you live somewhere like Malibu and to you the polar vortex sounds like something out of Doctor Who — a polar vortex is a large pocket of extremely cold air situated over the polar region that can occasionally break away and venture south into Canada and the U.S. In short, the polar vortex is a jerk. And this upcoming one is a slimy byproduct of an even bigger D-bag, a storm heading for Alaska that's expected to be even stronger than Hurricane Sandy. And the storm is also a product of yet another a**hole, Typhoon Nuri, which veered northeast of Asia earlier this week. So, you see, the entire thing is just a cycle of unacceptable behavior.But not to worry, we've got your back. Before the first polar vortex of the season ruins our lives all over again, here's a list of the practical items you'll need to survive the bitter cold.

1. The Thickest, Heaviest Down Jacket You Can Find

Seriously, we mean one of those things that make you look like the Michelin man. Now's not the time to be concerned with fashion — unless you want to be the most stylish girl in your city with frostbite.

If you can take something scorching out of the oven with your gloves, then they're thick enough.

Apply the same principles when choosing a hat. If you can smack yourself in the head and barely feel anything, then it's probably thick enough. Fleece lining and flaps recommended.

If your landlord is stingy with the heat, or if your house is drafty, a space heater will be your best friend this winter.

If you're still cold even with the furnace and your space heater on blast, there's no better feeling than curling up in bed under a warm electric blanket.

Or, if you're not into raising your electric bills through the roof this winter, curl up with your dog or cat instead. They're basically tiny, furry radiators of love — and the benefits are mutual!

One of the best ways to save money on heat and space heaters is to insulate your entire house. Again, now's not the time to worry about decor, so you take that bubble wrap and you go crazy.

8. Boots That You Can Hike Everest In

Seriously, that should be the criteria — would you be able to hike snowy cliffs in these boots? Also, they need to have good traction because freezing temps means icy streets.

9. A Thermos Filled With Something Hot

If you have to be outside a lot, sip on something warming throughout the day in a thermos that will keep the liquid hot. Resist the urge to spike it with whiskey.

It needs to be so big that it could double as your blanket.

It may not be socially acceptable yet, but when it's that cold out, no one will question your decision.