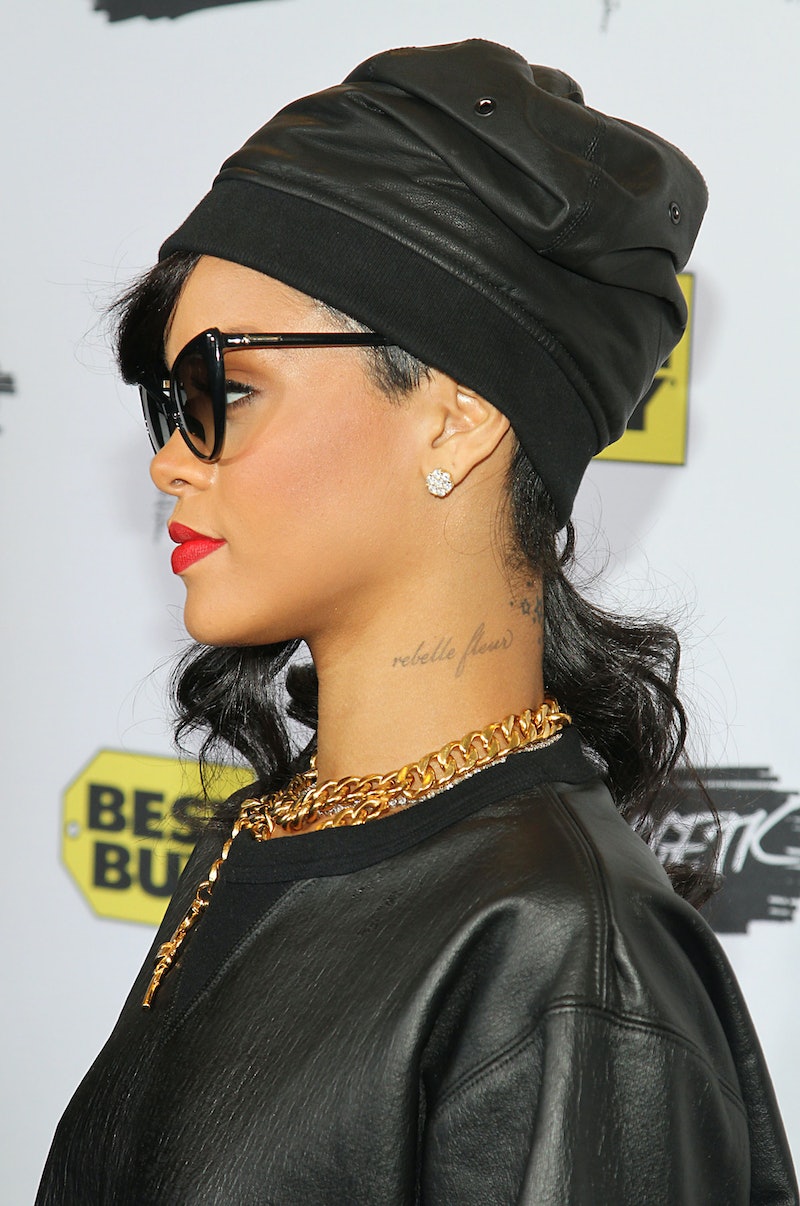 Rihanna is my girl. I try to keep up with her, but I know I never will. I even get mobile alerts every time she tweets. Yes, I am that committed. I never know what she is going to do or say next, but I know it's always going to be interesting and a little controversial. She's not only this way on social media and her in music, but through her fashion choices. I will never get over the clothes that she wears... or, better yet, the lack of clothes that she wears. Rihanna is always finding new and inventive ways to be naked, something us mortals thought was so simple and straightforward. With this chronic nudity we have caught a glimpse at some Rihanna body work — after all, almost every badass has some ink. For someone who is so often exposed, her tattoos can be tough to figure out. How many tattoos does Rihanna have? Where are all of them? What do they mean?

Well, from what I can tell, she has 22, but who even knows at this point. Especially with her adding on to existing tattoos, is hard to know if certain ones count as one or two tattoos. She might even have a new one by the time you finish reading this, but this is the conclusion I've come to so far:

Rihanna actually has two different star tattoos. One on the inside of her ear and another which is a stream of stars that run from her neck down to her back. She never explains a greater meaning to the stars, but it does match former boyfriend Chris Brown's star body art.

I am a sucker for anything astrology related. I would have pegged Rihanna to be a Scorpio like myself, but a Pisces is great. She has the symbol for her sign right underneath her ear.

Rihanna has the words "Never a failure, always a lesson" transcribed on her collarbone. So I am going to take that to mean that she does not regret any of these tattoos. Nonetheless, I think it is a great motto to have. We should all be able to take something good out of every bad situation.

Rihanna got a gun tattoo on the side of her torso a few months after she was domestically abused by Chris Brown. Rihanna explained her motivation to get inked in an Elle interview: "Everybody wanted to know what was happening in my life. Is she a drug addict? No. Is she an alcoholic? No. Is she a victim? No," she tells the mag. "That's why I got the gun. It was a symbol of strength. I'll never be a victim." Clearly, the gun is an empowering symbol for the singer.

Rihanna's hip tattoo is very fitting. It translates to "forgiveness, honesty, suppression, and control." No one could ever accuse Rihanna of letting her destiny fall into someone else's hands.

Rihanna has FIVE hand tattoos. That's one for each finger, but, of course, they aren't laid out as simply as that. On two different fingers Rihanna has the words "Love" and "Shhh" permanently inked. I find it ironic that someone so outspoken has the word "Shhh" on her body, but maybe it helps keep her in check. She also has three different tattoos on her hand that overlap and cover each other up. She has a New Zealand Maori tribe symbol and a dragon claw, and she covered that all up with art inspired by henna tattoos. I would love to meet Rihanna, but I think I would get so distracted if we met and shook hands.

Rihanna got an Isis tattoo in 2012 to pay tribute to her grandmother who passed away. At the time, the singer tweeted "Goddess Isis-Complete Woman-Model for future generations-#GRANGRANDOLLY-always in and on my heart #1love." Rihanna believes that Isis was the complete woman just like her grandmother and this tattoo has a dual meaning for her because of that.

When Rihanna got her Roman Numerals tattoo in 2011 everyone started to speculate. What did it mean? Was it her birthday? Something to do with Chris Brown? It actually translates to 4.11.1986 which is her best friend Melissa Forde's birthday. Forde also got a tattoo of Rihanna's birthday inked on her body, but with Rihanna's popularity I feel like she's not the only one...

Rihanna debuted her Nefertiti tattoo in a 2013 Rolling Stone issue. Rihanna really seems to love her ancient tattoos. Underneath it is Arabic writing that many have translated to say "freedom in God." What an interesting pairing underneath her armpit there.

Rihanna has "Rebelle Fleur" tattooed on the left side of her neck which translates to "rebellious flower." It seems a little different, but I think the description is perfect. She is feminine like a flower and obviously a total rebel. Makes sense to me.

So far, this is RiRi's only colored tattoo. It is a skull on the back of her ankle, but it has a little bow on it which plays off that juxtaposition of being both a lady and a badass. Classic Rihanna contradiction there.

The letter "R" stands for Rihanna. Duh. She also had an album called "Rated R" that used the same font for it's cover art.

The music notes on Rihanna's left foot were actually her first tattoo. It started so innocent. A small music note down on her foot, but this opened her up to get crazy with all of her other body art.

I guess Rihanna did not want to live in the innocent days of her music notes tattoo, because she had tattoo number one covered up with a fierce Egyptian falcon in the shape of a gun. With all the Egyptian and gun references already on her body, I guess it was about time that she combined the two. She explained the tattoo on Twitter: "Falcon: a light that shines in the darkness! Never close their eyes during sleep." That sounds like Rihanna, always shining through the darkness no matter what.

This picture is a little misleading. Rihanna did not copy Tupac and get a "Thug Life" tattoo across her stomach. She actually has the words emblazoned on her knuckles.

Rihanna has a small cross tattooed on her collarbone. Her tattoo artist Bang Bang said that was the perfect location "because it's easy to hide with a necklace but also can be in plain sight."

The Tibetan word on Rihanna's hip remained a mystery for a little bit, but it actually means "lover." This is very fitting for someone like Rihanna who has managed to find optimism and love no matter what she has been through.

Rihanna is always giving us something to talk about, and I am sure there will be more additions to her body art. I can't wait to see a little grandma Rihanna all tatted up in the future. That will be precious, but in a badass sort of way, of course.