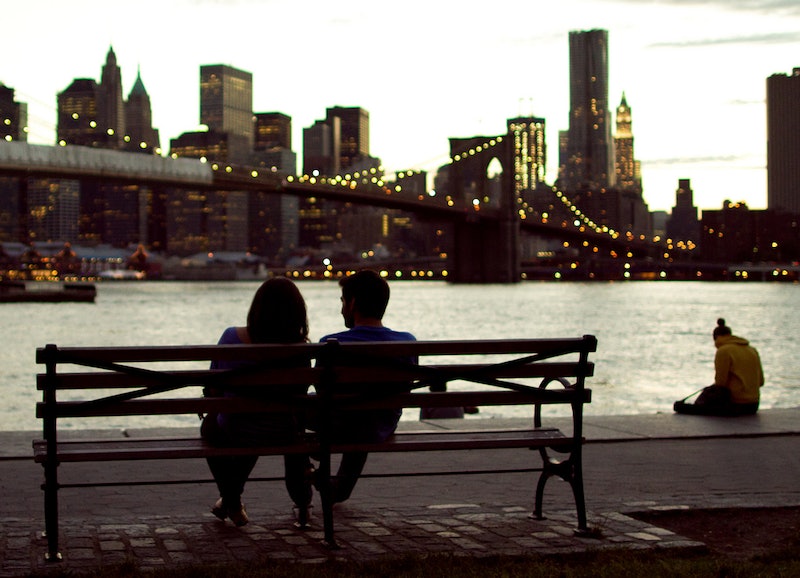 During those crucial first few dates, there are certain things that we all do that tip the scales in our favor just a little bit. And there are subtle things that the person we're on a date with can do that weirdly speak disproportionate volumes to our overall impression of them; a gesture, a comment, or even simply the way they carry themselves. These are small glimpses into our deeper undercurrent of crazy, and if you don't know what you're looking for, you might miss them. So, in the interest of informing ourselves, I asked a few of my girlfriends what the biggest red flags are – even in the first few dates – that let you know it's just not going to work out in the long term.

1. "I once got invited out to a nice dinner by a guy from work who had been flirting with me for a while. We actually really hit it off, and were having a great time, but when the check came he broke it down item by item and made me pay 4 dollars more because my cocktail was more expensive than his beer. It was so insane and detailed and completely took away from the sexiness of the evening. And I'm sorry, it's not about gender, but if you invite someone out, you should at least offer to pay." - Andrea

2. "I think there are a few things that really let you know the guy is not relationship material. A few that I have found in my dating life:

3. "When I was dating this guy back in college (aka when I had really low self-esteem and didn't know about feminism yet), he told me on the second date that he really "liked his girl to stay in shape and keep it neat down there" and insecure 19-year-old me was like "omg I expect the same from myself." Like how much more pathetic could I have been, by the way? Annnnd of course he ended up being a controlling douchebag who made me feel like shit all the time. And not to be petty, but he definitely didn't keep himself in perfect shape either" - Clara

4. "Anyone who makes "politically incorrect" jokes on the first date or so really needs to go. Like it's not even so much about like 'I'm offended at this joke' so much as 'Why does the best version of yourself that you're trying to present on a date think that racist jokes are funny and charming?'" - Ella

6. "I think it obviously varies from person to person, but I've always found that people who complain too much about past relationships, or dating in general, are not good for relationships. Like it's normal to be like, 'Yeah, I've had a hard time with dating,' but sometimes people get SO wrapped up in their resentments about the dating world, and it's just not healthy. If you're complaining about ten different people in one conversation, maybe the problem was you?" - Molly

7. "There is a "douchebag first date look" that always ends badly. It's when the guy wears a darkly-colored, striped, often slightly shiny button-down shirt with dark-wash jeans, square toed black shoes, and gelled hair. It's just always a douchebag in that outfit, and a dumb one." - Naomi

8. "If a guy talks about how much money he makes, or even worse, tries to allude to it in a totally transparent, humblebraggy way, it's definitely a red flag. Guys who have something to prove like that are just never going to be good partners, because the tie their value up in how much is in their bank account." - Sam

9. "I once went on a date with this girl who started getting really combative with me about politics from the jump. And I am super liberal so I feel like we mostly aligned, but I guess I wasn't far enough left for her on some issues, so she started getting really weird and pushy about it. And at the time I thought it was really sexy (translation: I thought SHE was really sexy) so I just kind of went with it. But our whole relationship ended up being a lot of her getting mad about me about politics, and me not being "involved" enough for her taste." - Alex

10. "Anyone who really tries to have sex with you on the first date even though you clearly are not ready to be physical should not get a second date, let alone a relationship. I'm not talking about forcing themselves on you, I'm talking about just like "trying to guilt you into putting out or attempting three times in a row despite getting shot down to take you home for the night." Even if they eventually give up, it's just not a good sign when someone is trying so hard to push your boundaries sexually." - Ana

11. "Too much cologne, too much perfume, or smells slightly funky. No significant smells of any kind should ever be allowed on a date." - Julie

12. "It's not always easy to notice but I think a big indicator of how they will be in a relationship is how much they talk vs listen on the date. Sometimes you're both nervous and one person might talk more than usual, but you can still probably get a sense of how much they let the other person speak. But them being too quiet isn't good either, like you need to have a good balance from the first date or it's probably not going to get better with time.

I used to think that a guy who talked a lot was really interesting and intelligent, and guys who almost never talked were pensive and good listeners. But both types of guys turned out to be not great in the long run, and those qualities only got more pronounced as time went on." - Jamie

13. "If he talks about his mother like she is a former (or current) girlfriend, run. No. Mommy. Issues." - Olivia

14. "Somehow I have ended up going out on a lot of dates with guys who were really pretentious about where they went to school, and every time I continued dating one of those guys, it was a mess. Anyone who is really braggy about their education is probably not relationship material (unless you also went to Yale or whatever)." - Amanda

15. "Watch out for guys who expect you to laugh at his jokes, but who doesn't really laugh at yours, except maybe a "heh" or "hmm." It can be really subtle, but it's a HUGE personality indicator for the relationship." -Leila