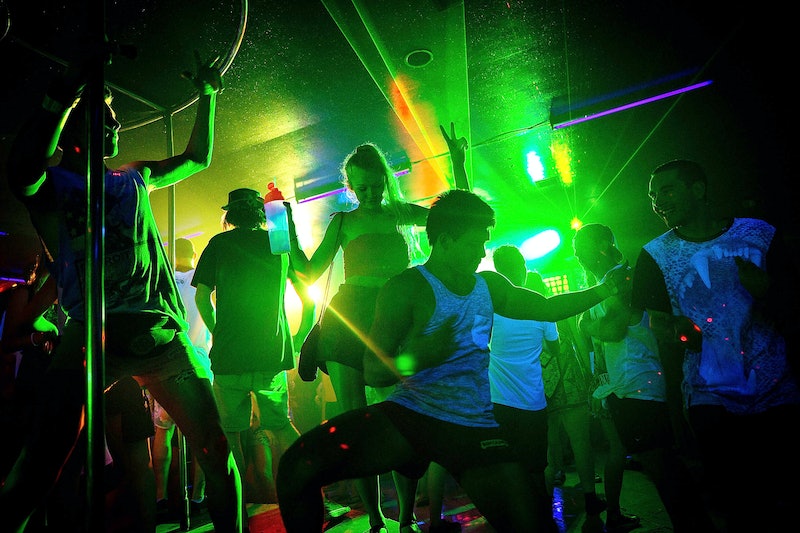 Health-conscious partiers take note: you officially don't need to drink alcohol to have fun at a club. Teachers, doctors, and parents may have imparted this wisdom from the time we were young, but for many, the idea never stuck. Stockholm, Sweden is the latest city to host sober partying, a health-craze that's finding success all over the world. The concept is simple: clubbers have the same experience they would in a traditional club, but they must be stone-cold sober. At Sober, a club event in Stockholm, club-goers must submit to a breathalyzer test upon entry. If the reading is above 0.0, they are denied entry.

Sober creator Mårten Andersson credits the straight edge movement of the 1980s with inspiring the idea, but Sober is more approachable than straight edge events. "Straight edge" is a hardcore punk subculture. An event idea — rather than a relatively militant lifestyle — is easier to access for those who might not want to abstain all the time, or are just trying the night out. Anderson decided to try sober partying for himself after too many rough next mornings:

I thought I was alone in bed and turned around and realized I wasn’t and that I didn’t have a clue who the person lying next to me was. That’s not how I want to live my life anymore.

(you could wear these!)

I was a real party girl, but I don’t miss it. Now, I’m just really into dancing, and there’s a wonderful vibe and great energy at this club. People are here to have a good time. At other clubs you always have to deal with drunk people who bump into you and smell bad and smoke a lot. I don’t think they’re as happy as this crowd.

Alcohol is a social lubricant, and many of us may feel that we "need" alcohol to get silly on a night out. I know that when I've been drinking, my dance moves are killer. But what if we decided that we could let loose in the same way without alcohol? When written, it doesn't look like such a crazy idea, but many in our generation (and the generations that came before, no doubt) can't imagine a night dancing or seeing bands or belting karaoke without alcohol to ease the transition into what is considered "bad behavior" when we're sober. We may be afraid that if we don't drink, we don't get to have the same kind of fun; there's no excuse anymore.

Club-goers in other cities have created similar sober, previously unprecedented club events. No Lights No Lycra (NLNL) in Australia hosts what they have labeled "dance classes" rather than raves or parties. Like Sober, the events are borne of the idea that people who live various lifestyles love to dance, but not everyone needs to be up late, drunk and/or high. Morning Gloryville — run successfully in London, New York, Amsterdam, and Zurich to name a few — is a sober rave fitness craze. Starting at 6:30AM, attendees show up to party sober and dance hard before work.

There is something intriguing about a big night (or morning) out that isn't followed by a hangover shame spiral. There is also something mildly hypocritical about a "health conscious" person downing ten pints on a night out just because they can or should. Consider this: we don't even NEED to be at a sober club event to go clubbing sober. We could just do it on our own, even if those around us are drinking! According to Buzzfeed, there are several compelling reasons to party sober, including the enhanced ability to win arguments and the decreased chance you'll look the absolute worst in photos.

Watch your town for sober partying opportunities... given the healthy living movements sprouting up to motivate us to clean up various areas of our lives, sober clubbing is sure to stick around.