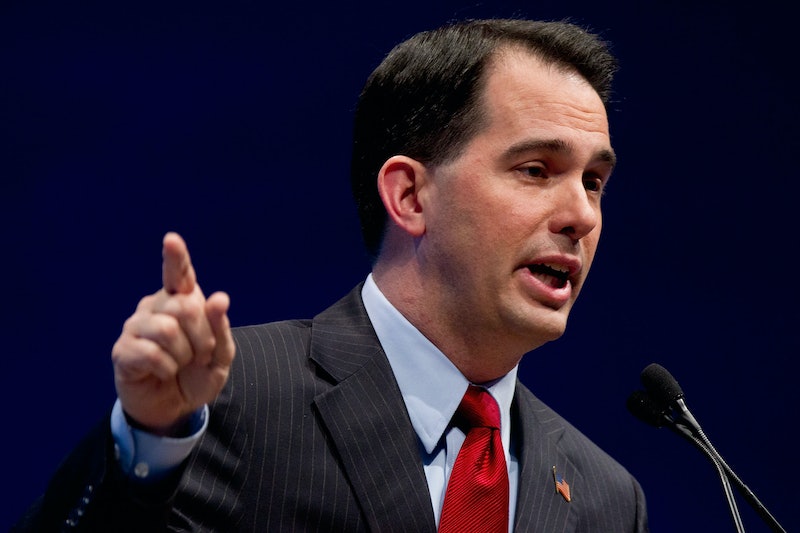 Since the conclusion of the 2016 midterm elections, it's been a waiting game — how long until the 2016 presidential field starts to get a little clearer? The eventual Hillary Clinton decision, of course, looms especially large on the minds of potential rivals, both within her party and for the Republicans. But save for conservative neurosurgeon Dr. Ben Carson, there aren't any GOP primary challengers who've really jumped into the fray in an obvious way. But a new one generated some buzz on Sunday: Wisconsin Governor Scott Walker hinted he could run for president on NBC's Meet The Press. Which awkwardly, according to NBC News, is the opposite of what he pledged during his reelection campaign.

Walker didn't come right out and detail much of his thinking, except to say that he cared "deeply about not only my state, but my country," and expressing an affinity for seeing a Governor on the Republican ticket. As it stands now, the state of Republican governors available for their primary field is a little uncertain – New Jersey's Chris Christie was embroiled in scandal for months, and comes complete with a brusque attitude that could rankle general election voters, while Texas Governor Rick Perry flamed out disastrously in the 2012 race. Walker could be a high-profile contender for the presidential nomination, regardless of how his polarizing reputation could play in a general election.

Walker didn't hog all the 2016 buzz, however, showing some Wisconsin love — he also hailed Rep. Paul Ryan, though only while subtly highlighting his lack of executive experience.

I love Paul Ryan, I’ve said many times I’d be the President of the Paul Ryan fan club. Paul Ryan may be the only exception to that rule, But overall, I believe governors make much better presidents than members of Congress.

If this "executive experience" argument sounds familiar, it comes up a lot in presidential campaign politics. And at least in the modern era, there's been some track record to support it, though admittedly over a small sample size. Until the election of then-Senator Barack Obama in 2008, no senator had been elected president since John F. Kennedy in 1960. Besides George H.W. Bush, who was elected as an incumbent vice president after serving as CIA director, every other victorious presidential candidate since JFK has served as a U.S. governor.

And obviously, the Republican Party would love that ostensible advantage to continue — their gubernatorial ranks are considerably more flush with possible presidential contenders than the Democratic Party's. While they do have one successful high-profile governor, California's Jerry Brown, he'll be 78 years old during the 2016 election. In short, if we see a governor win the White House in 2016, you can bet solid money on that person having an R next to their name, and Walker is as good a candidate to get it done as there is.