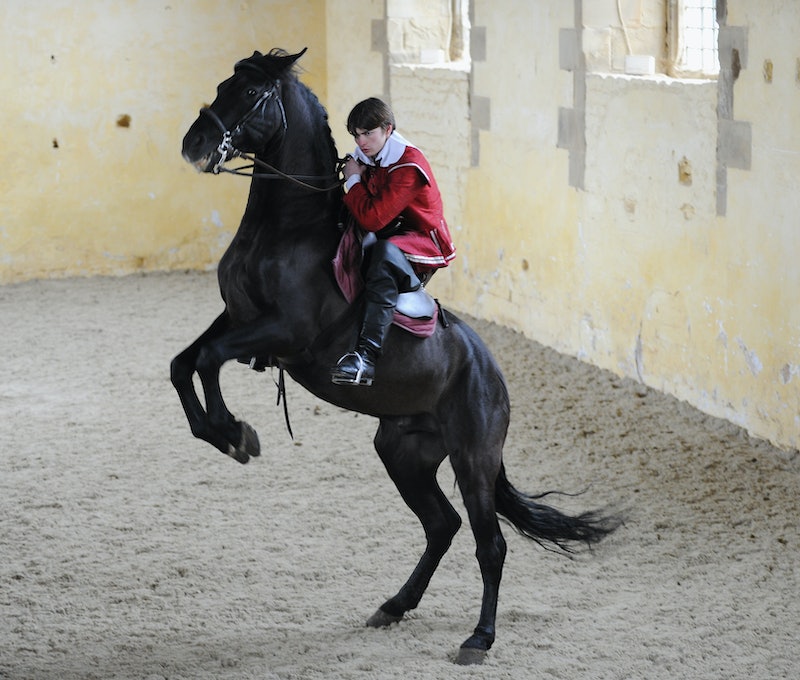 At any time in history, science has found that at least 30 percent of the population of little girls were obsessed with horses (this is a fact that, while entirely fictitious, feels true).

I was a child of the '90s, and I was one of that 30 percent. My room was plastered with images of horses I gathered from wall calendars starting at age five, I owned an encyclopedia that contained all the details one would need to properly care for a horse, and I volunteered my time at a local horseback riding arena in order to gain free lessons and time spent grooming horses. Some people liked horses, and some people loved horses — but I was a super-fan.

There was just one thing that interfered with my childhood dream of horse ownership: I was poor. Like, family-on-food-stamps poor. At some point I had to realize that having my own special bond with a horse, in which it loved me and I loved it and we braided each other’s hair, was probably not to be. So I did what any other child, bereft of the ability to own a pet that cost multiple thousands of dollars, would do. I turned to the saving grace of fiction in order to get my fix. I spent my days stuck in the pages of any horse-themed book I could get my hands one, checking out my maximum total at the library. And that’s how I became one of Walter Farley’s millions of readers.

You’ve probably heard of the Black Stallion books, either from having them read to you as a child or maybe from the multiple ill-fated movie versions. Walter Farley began publishing them in the 1940s, after beginning the series while a student. His books have been read steadily and still sell tons more than half a century after being published. But with more than 20 titles in the series, there are some installments that stand out above the rest.

These are the top 10 in the series, ranked:

The book introduced Black to my other favorite stallion, Flame, but the drama I anticipated when checking out this title fell a little flat because rather than battling each other, the two stallions banded together to fight an evil vampire bat. I knew at age 10 that vampire bats were actually quite harmless, thanks to my trusty animal encyclopedia, so I wasn’t too convinced.

When three lookalikes of the Black Stallion show up in the U.S., Alec takes a trip to see if the Black’s sire is still alive and breeding, presumably to get more stock for his budding racing farm. The complexities of the story went over my head when I was a kid, but I do remember loving the exotic locales and the rough-and-tumble adventures that Alec and Black got up to.

You know that quote from The Chronicles of Narnia where they say of Aslan, “Well, he’s not a tame lion”? Well, this book felt to me like Farley’s attempt to say the same of the Black. But when I was reading it as a kid, all I wanted was for Alec and the Black to be back in harmony, so it was harder to get through.

Of course Alec named the Black’s colt “Satan.” I was awash in a sea of feels, so badly did I want the Black to survive the forest fire this book throws at him. It was harder for me to care about the fate of Satan, but that could be because I thought it was a bad name for a horse.

The race between Flame and the Black in this story was everything I had wanted from their first meeting, and the tension between Alec and Steve, Flame’s human counterpart, was my favorite.

Filled with drama and life-threatening situations for both human and horse, this is one of the most exciting in the series. The spooky plot had me riveted, up past my bedtime underneath the blankets reading with a flashlight just to see how it ended.

The title entry may not be the most compelling of all the books, but it is the most important. It’s an outlandish tale, one of Farley’s specialties in a series filled with caricatures of Arabian sheiks and dramatizations on the racetrack. But it’s the beginning of what becomes an incredible relationship between human and horse, and placing myself in Alec's shoes as he battled to win the respect of a killer horse is what got me hooked on the series.

This entry introduces a rival stallion, Flame. He battles invading humans from taking over his herd, which felt like a totally convincing animal world rivalry for me as a child. I remember being totally engrossed in this new, tropical paradise world, locked away out of time, and Flame's struggles to defend his family.

The 12th in the series, this book was a revamping after a few lackluster entries. It grabbed my attention again by putting the Black back on the racing track, but as an underdog again. The tension I felt finishing the last few pages helped propel me to read the whole series.

This was my favorite as a child, since it was really the first time the Black Stallion interacts with a woman character, and bonds with her. I saw myself in Pam, and admired her pluck as she faced the challenge of gender bias in the cutthroat world of racing. As I recall, the ending left me in tears. OK, still does.