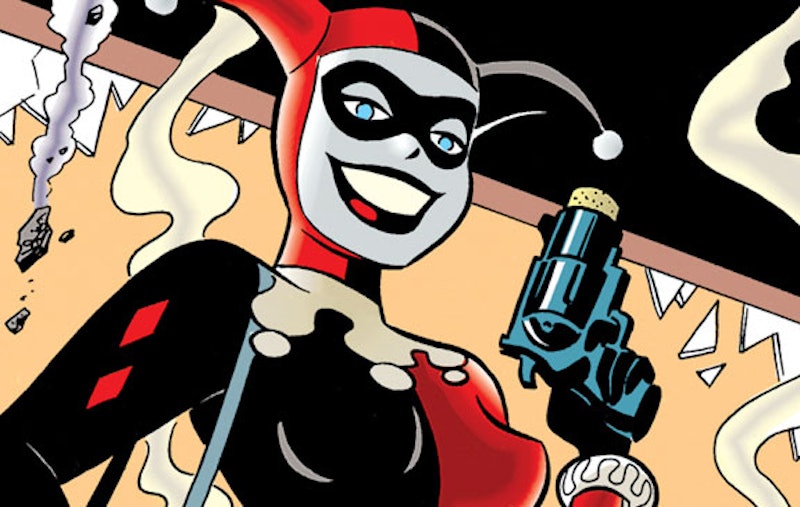 This is the moment that every Batman fan has been waiting for — or, rather, that every Harley Quinn fan has been waiting for since her introduction in Batman: The Animated Series. Reportedly, Margot Robbie has been cast as Harley Quinn, which would mark the first time Harley's appeared on film. Thinking it over, I actually have no complaints about the casting — Robbie has a mischievous look about her — but I am a little worried about her role in a Suicide Squad movie. See Harley, put plainly, is my girl, and God knows what direction they're going to take with her.

I'll admit I'm not a comic book expert, and I'm a moderate fan of the Batman canon (claiming anything more than that will probably get me nerd-shamed) but I am emotionally invested in all things Harley. In my teen years she was my favorite character, with her blonde hair, bubbly personality, and that infectious combo of cute-and-crazy. Plus she was constantly trying to win the affections of a sociopath, a phrase that adequately describes about eight years of my life. These days I try to maintain a calmer, coy Selina Kyle vibe (lots of black leather outfits, obvi), but at the end of the day, I'm probably more clown then sex kitten.

So I'm defensive of my Harley, and hold her in high regard as one of the more intriguing inhabitants of Gotham City. Here's a short history (herstory? Harstory?) of the one and only Harley Quinn.

On September 11, 1992, Harley Quinn makes her debut in the Batman: The Animated Series episode "Joker's Favor." Originally conceived for one episode alone, the character proves to be adorable and hilarious, and they weave her into several different episodes. She even stars in gems like "Harlequinade" and "Harley's Holiday." In addition to her addiction to Mr. J and her love for hyenas Bud and Lou, she fosters a strong friendship with Poison Ivy in the aptly named "Harley and Ivy." Ivy proves to be a good influence, and constantly encourages Harley to get over the Joker and grow a backbone. Said backbone, sadly, lasts only until the end of the episode. Harley is usually seen going back to the Joker at the end of the day, although the Harley/Ivy pairing still remains a fun femslash pairing.

In 1994, Bruce Timm and Paul Dini give Harley a back story in Mad Love, an Eisner-award-winning one-shot comic. In it, we learn that batshit-crazy Harley used to be Dr. Harleen Quinzel, the Joker's psychiatrist. Harleen was overly sympathetic to the Joker's (probable lies) about his troublesome past and decides to win over him over by taking up the Harley Quinn mantle, breaking him out of Arkum Asylum and (much further down the line) attempting to kill the Batman. In 1999, the comic is adapted into an episode in The New Batman Adventures, and in a brilliant moment we get to watch Batman boast to the Joker that Harley was MUCH closer to killing him than the Joker has ever been.

In the short-lived 2002 series Birds of Prey, which is set in a post-Batman Gotham City, Harley ends up being the main antagonist, battling it out with Batman and Catwoman's daughter, Huntress. Sorry if I spoiled the entire show for you, but I'm sad to say that it's next-level awful, and you never need to watch it. They play "All The Things She Said" during the final fight scene, just to give you a clue as to how bad it is.

She's later featured in the brilliant web series Gotham Girls, three seasons of flash animations that paired her with Batgirl, Poison Ivy, Catwoman, and other ladies of the city. The cartoons do well enough to prompt the similar 2009 series Gotham City Sirens and more than a few hokey Halloween costumes.

Finally, Harley also gets formally added to the Batman comic canon (an anomaly, to be honest), gaining her own 38-issue series between 2001 and 2003. It shouldn't have ended there, because let's be real, Harley has WAY more than 38 issues. Hahaha. Ha.

With the exception of the aforementioned Gotham City Sirens and a decent role in the 2009 game, Batman: Arkham Asylum, many dark, Harley-less years followed, leaving fans to their own devices. After being cut out of Christopher Nolan's The Dark Knight, fans took to photoshopping their own Nolanverse versions of Harley, using funny blondes such as Kristen Bell and Brittany Murphy as templates.

To placate the need for a Harley in the Nolanverse, the fan made web series The Joker Blogs is created towards the end of the decade. Though she's unseen for the majority of the first season, Dr. Harleen Quinzel serves the catalyst for the series by creating therapy tapes of her sessions with the Joker. It's all very meta, and it's still going on if you have an hour or three to spare.

Where to begin? The last few years have been characterized by Harley's darker, grittier, sexier update, and reviews have been... mixed, to put it gently. After spending Arkham Asylum flitting around in a nurse's costume, the expansion for the sequel Arkham City, dubbed Harley Quinn's Revenge, finally places Harley as the main antagonist. Yes, this is spurred by her undying loyalty to Joker and yes, she goths out like a 13-year-old in Hot Topic for the majority of it, but this is progress, people.

And then we have Harley in Suicide Squad, mired in fierce controversy. When Harley got a reboot in 2011 for the New 52, hair double-dyed, boobs akimbo, it caused more than a little bit of fury. She looks like what would happen if Hot Topic ran a prostitution ring, but what legitimately bugs me is the logistics of fighting in that. You CAN'T, dude. Later on, DC Comics decided fans weren't pissed off enough and held a contest where fans could draw Harley Quinn committing suicide in a bathtub. Yeeeeah.

Harley's no longer a one-note joke, but I'm not pleased with the way Suicide Squad has treated Harley already. In many ways, it makes the Joker look like Prince Charming. Hopefully the movie will showcase the best Harley has to offer: hidden strength and hilarity.