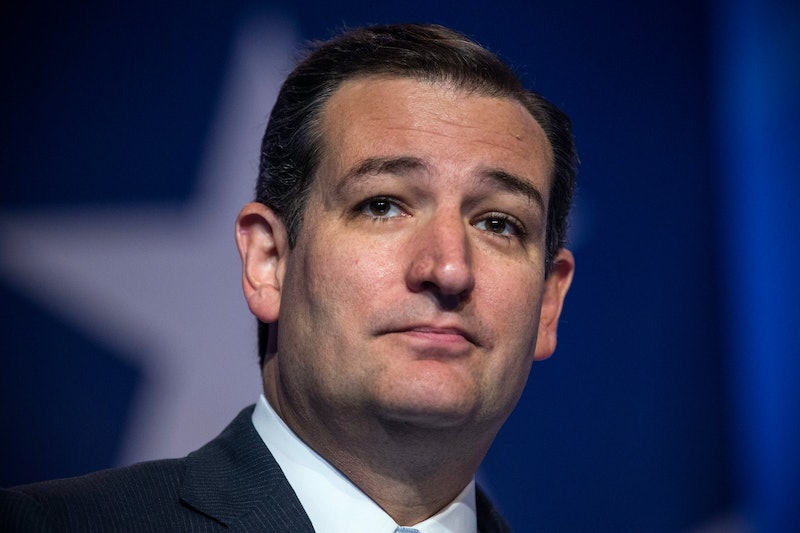 When you hear the words "net neutrality," what do you think of? The protection of a vital means of communication and information from corporate influence? A means to halt the creeping spread of pay-to-play style corporate favoritism in the online realm? The reason your Netflix titles stream properly? Well, whatever you settle on, you may not have thought of this: Texas Senator Ted Cruz called net neutrality "Obamacare for the internet" in a tweet Monday, following President Obama's call for the FCC to reclassify the internet as a utility, thus allowing the agency more power to regulate.

Cruz communications director Amanda Carpenter added some context to her boss' tweet, stating that "Net neutrality puts gov't in charge of determining pricing, terms of service, and what products can be delivered. Sound like Obamacare much?" It's not exactly Ben Carson calling Obamacare the worst thing to happen to America since slavery, but in the realm of political discourse, it's an amusingly desperate reach all the same.

This is far from the first time Cruz has clumsily shoehorned a reference to Obamacare into someplace where it doesn’t belong. In the past, he’s compared funding Obamacare to British appeasement of the Nazis, joked that the people running the Healtcare.gov website were “Nigerian email scammers,” and claimed Obamacare is like the WWE — “all for show.” But, as it now pertains to a political issue of major import, his latest rhetorical slight-of-hand is maybe the most concerning.

In fairness, there are some cursory similarities between how Republicans talk about Obamacare and how they often talk about net neutrality, as exhibited by Cruz's example — for one, the implication of overbearing government, in spite of the fact that neither actually pulls services from private to public. Obamacare, as the GOP calls it, actually mandates that all citizens must acquired private health insurance, a fact many in their ranks condemn, while simultaneously suggesting that it represents a government takeover of the health care industry.

Rather, Cruz’s objection is basically a rote repackaging of a Republican argument as old as time: regulation bad, deregulation good. This seems like an especially puzzling point to be making about cable and internet providers, all things considered — the landscape of cable companies in America looks functionally monopolistic, with a cabal of corporations maintaining geographic strongholds which stifle actual competition.

So far, responses to Cruz's foray into internet politics hasn't been terribly well-received online — he's inspired countless mocking tweets and stories, and while that's all well and good fun, the importance of his remarks shouldn't be overlooked. The GOP has been quite successful in recent years at taking Democratic (or at the very least left-wing) policies and cobbling them together into a sort of grand design to rage against, even when they're diffuse ideas with distinctly different goals and mechanisms.

With this simple barb, Cruz is aiming for the same trick with net neutrality. Now that Obama's taken a position, it's easy for Republicans to take that reflexive, contrary tact, and make this into a rank-and-file wedge issue like any other. No legitimate issues underlying, no potential to protect consumers — just another Democratic power grab by that tyrant Obama and his legion of regulatory minions. For all our sake, here's hoping it doesn't bear fruit.