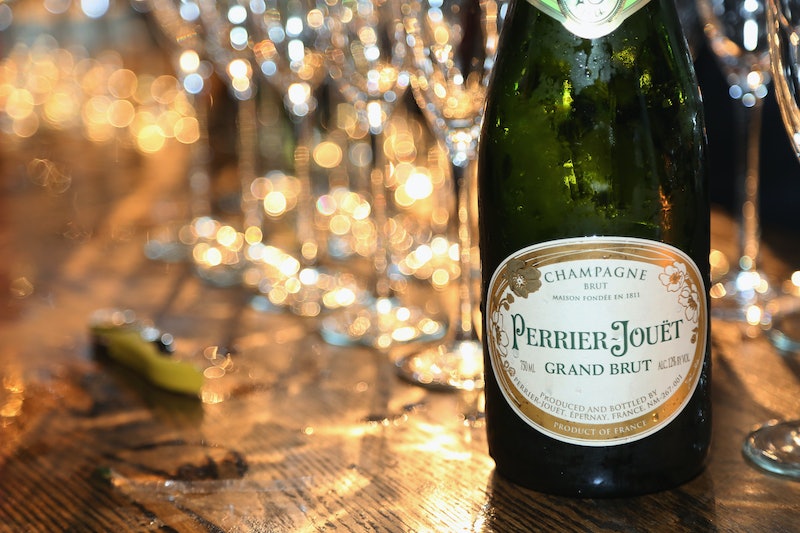 We've all spent time buried chin-deep in the champagne-soaked world of Jay Gatsby, the smoky jazz Clubs of On the Road, or one of Holly Golightly's Upper East Side soirées. And I bet I'm not the only one who's sighed dreamily thinking, Wouldn't it have been cool to party with person who dreamed up this crazy tale? You're nodding, aren't you?

Really, though — who hasn't spent a night, glass of wine and good book in hand, fantasizing about hurtling headlong into the universes of her favorite writers for a day or two to bask in their brilliance, sampling the nightlife of a lost time? Oh, and definitely trying one of those famous favorite drinks along the way, too?

Well, say for one weekend (let's make it a holiday weekend like this one and tack on an extra day; you deserve it) you have a time travel ticket to party, consequence- and hangover-free, with a classic author of your choice. For your consideration, here are seven of literature's most intriguing writers I wish I could have partied with, ranging from the tamest time all the way to insane, three-day bender, depending on your preference. Whether your idea of a good time involves relaxing in a candlelit parlor with the Lost Generation, or raging 'til dawn at one of New York City's most infamous black tie balls, there's something here for everyone:

Why choose Stein over her famous Lost Generation contemporary, F. Scott Fitzgerald, you ask? It's all about strategy. Think about it: Good old Francis Scott may always be up for some fun, but Gertrude's the one with the sick crash pad. That's right, I'm talking about the legendary Salon that Stein held on Saturdays at her place on 27 Rue de Fleurus in Paris. Why go out and find the party, when the party can just as easily come to you?

Imagine the mass text you'll send to regular attendees Picasso, Apollinaire, Matisse, and Fitzgerald: Hey guys, I'll be at the Salon all weekend. Come by for some brilliant conversation with the greatest minds of your time. It's byob, but I think Gert has some decent champagne hidden around here.

A few days sunning yourself at an elegant outdoor café in the beautiful city of Pamplona sounds terrible, right? If you answered, NOT AT ALL, then a weekend with Ernest Hemingway may be just what you're looking for. Sure, I guess I'll suffer through one more round of Pernod as the melody of a distant Spanish guitar wafts softly through the air. If you're feeling extra daring, I bet Ernest would gladly mix you up a glass of Death in the Afternoon, a cocktail of his own creation containing champagne and — you guessed it — more Pernod, helping you achieve the perfect buzz just in time for the running of the bulls.

If you're legendary enough to have the New York Distilling Company name their gin after you ( Dorothy Parker American Gin ), you must have done something right. One of the original masters of sass, Parker's reputation as a brilliant with made her a sought-after party companion in the 1920s and 30s. Parker found success first as a writer for Vanity Fair and The New Yorker before carving out a career for herself as a screenwriter in Hollywood. If playing wingman to a mercilessly clever, hilarious lady is your style, you've found your calling.

If rubbing elbows with the social elite of the 1960s sounds tempting, why not use your time travel ticket to attend one of New York City's most legendary parties of all time, The Black and White Ball? Following the instant success of In Cold Blood, Capote indulged in his obsession with the high life by planning the party of the century at Manhattan's Plaza Hotel. The author himself painstakingly planned the evening's guest list, which read like a who's who of society's rich and famous. Nabbed an invite? Great. You better have something good to wear.

If you're curious about what it might be like to spend some time with one of literature's most infamous bad boys, I have two words for you: Naked Lunch. If the mind-bending novel is any indicator of what a weekend with William S. Burroughs may involve, I'd have to advise you to proceed at your own risk (or at least bring a trustworthy and responsible friend with you). Some of the author's wildest days were spent in the Moroccan city of Tangier. With that said, you'll be needing a passport, sunscreen, and a good lawyer.

If that face doesn't scream down to party, I don't know what does. When he wasn't penning clever Restoration-era poetry way back in the 1600s, the notorious libertine was busy tearing up King Charles II's court with his drunken antics and high-profile mistresses. Love romantic poetry and courtly hijinks? Great, let's party like it's 1672! Unfortunately, Wilmot's hard-partying ways eventually caught up with him in the form of syphilis. Be a good friend and talk to him about his behavior.

Who else could cap off this list more fittingly than the king of the Beat Generation himself? A weekend with one of literature's most legendary free spirits is not for the faint of heart, though; we're talking frenzied, all-night ragers fueled by cigarettes, whiskey, and the wild riffs of Charlie Parker's saxophone. Pass out after one Bebop dance and drink too many, and when you finally come to, find yourself halfway across the country cramped in a speeding car with Neal Cassady at the wheel and some guy who calls himself Japhy and promises you transcendence riding shotgun. Next stop: San Francisco. You don't need to be at work on Monday, do you?