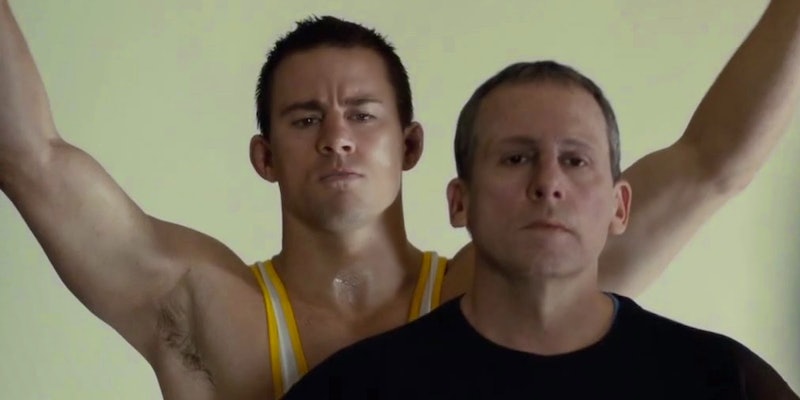 Channing Tatum is synonymous with many things: Abs, arms, a stripper-past, a Jonah Hill bromance and an adorable family life with wife Jenna Dewan-Tatum. But starring roles in dark, brooding dramas is not one of the things most closely associated with the 22 Jump Street actor. This fall, Tatum stars opposite Steve Carell (in an equally as stereotype-crushing role) in Foxcatcher.

The film follows the true story of Olympic wrestlers and brothers Mark and Dave Schultz (Tatum and Mark Ruffalo, respectively) and their relationship with sponsor John du Pont. If you've seen the trailers, or were privy to 1996 newspaper headlines, you know exactly where this narrative is headed.

Channing Tatum, along with Steve Carell, director Bennett Miller (Moneyball) and the film's writers gathered to talk to reporters at the Los Angeles press day for the film. And Tatum had no problem confessing that the movie was the most difficult challenge of his career.

"You can't fake wrestling," he said. "The hard hits. I don't think they'll ever leave my body. We learned very quickly that you can fake a punch, but you need to see the hand hit the side of the face and the head-butting. It was by far, and I don't say this lightly, the hardest thing I've ever done."

Tatum, who is well-versed in the world of sports, martial arts and dance, explored his physical limitations in an entirely new way for Foxcatcher. "It was a suffocating and very painful thing, but at the end of the day I'm so just in awe of those athletes, and very very proud to have been given such an amazing time and focus through some of the most amazing athletes I've ever met with. It was a blessing."

Tatum, with his healthy stature and muscled neck set between wide-set shoulders, is the physical ideal of a wrestler. But his acting counterpart, Steve Carell, is used to using his comedic timing and emotional acting abilities over his physical strength.

"Steve is actually a great athlete," Tatum revealed. "We had to be like, 'Less good, Steve, less good.' I was in awe of just getting to work with [Steve & Mark Ruffalo]. They're so in control of what they do. Steve's ability to stay in it is pretty unbelievably deep. Mark, he's actually my big brother now. I've said it to him, 'I'm your little brother now.'"

Tatum's character in the film is the definition of silent and brooding. He is a hugely influential, dangerous mass, but his power is unspoken. Tatum's Mark Schultz walks with lead feet and tight shoulders, brow eternally furrowed.

"I got to hang out with Mark a lot," Tatum said. "The way he walks, the way he holds his fork, he just feels like a really dangerous animal, and he moves through life that way. He wanted people to be afraid of him. In wrestling... there's a lot being said without talking. You're in a quiet gym, and you just hear grunts and slams and slaps and breathing hard. The way that you hand fight is a bit of a chess match."

This isn't the first time Tatum's played a real life person on film. He played a lucky, street-wise kid in 2006's A Guide to Recognizing Your Saints, and Mark Schultz marks the second "based off a true person" story he's starred in.

"You are playing someone alive, but ultimately they're versions of the person," Tatum said. "The stakes are very very high. I have to live with Mark Schultz in the world and hoping I did some amount of justice for him. I can't put everything that Mark Shultz is in 90 minutes, it doesn't work like that. But there's satisfaction in knowing I left it all out there. I know I gave all the colors I could possibly give so that someone can paint a picture."

While comedic vet Steve Carell admits to wanting to pursue more serious roles, Tatum isn't so sure. His rolodez of roles is vast, but being labeled a "serious actor" isn't a concern for the 34-year-old father.

"Comedy doesn't come easy for me. I've only done two movies that are really comedy-styled films, and I work at them. And they are just as scary. I hate labeling all these things: comedy, love story, mystery, dark drama — but they're all just different muscles."

More like this
The 'Love, Lizzo' Harry Styles Scene Is Just 1 Moment That Made Fans Feel Seen
By Brad Witter
Blake Lively's Reaction To Ryan Reynolds' Dance Video Was Pure Thirst
By Stephanie Topacio Long
'Avatar 2' Now Has A Teaser Trailer & Release Date
By Jack Irvin and Alyssa Lapid
Emma Corrin Spoke Out Against “Clickbait” Headlines Surrounding Gender Conversations
By El Hunt
Get Even More From Bustle — Sign Up For The Newsletter