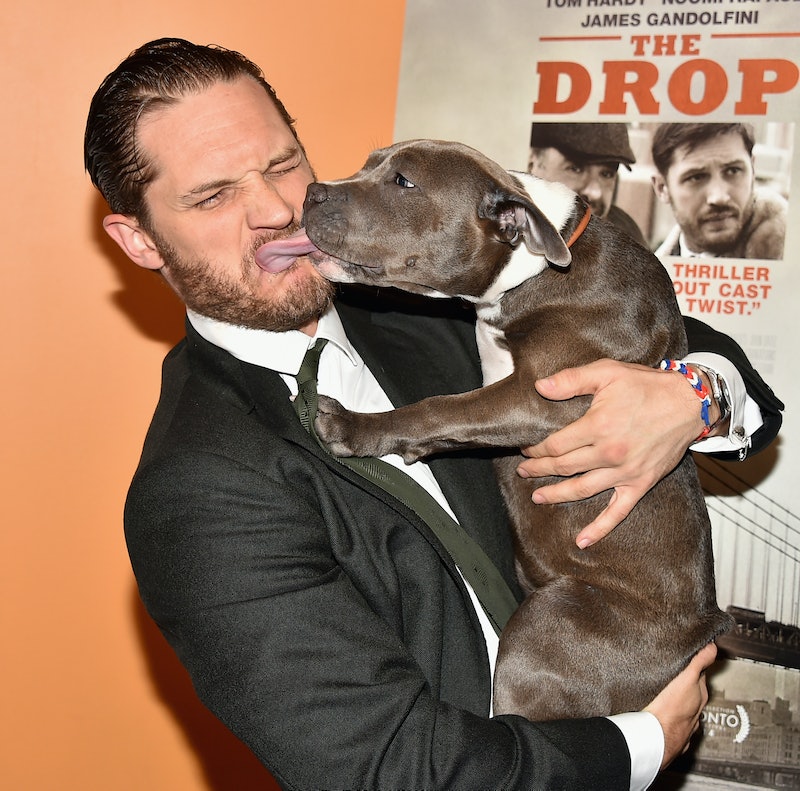 Oh, Tom Hardy. Why are you the greatest human there is? You can try to tell me that there are better actors out there, and I'll let you rant and rave, but you'll never make my heart believe it's true. You can try to tell me that there are finer and foxier men alive on this planet, but you will never convince my heart that this so. Sometimes I forget how much I love Tom Hardy, but then something happens – like I decide to move on from a kinda toxic (lol, awkward) relationship – and suddenly, I start to find myself googling things like "Tom Hardy Dogs" and spending countless hours scrolling through the internet for photos of the dude late into the night over glass after glass of Malbec. Don't act like you don't know what I mean.

Tom Hardy photographed with dogs is a universal palliative. The combination of his hotness and sweetness combined with the allure of some sweet pups has probably brought at least one party to spontaneous orgasm. I, for one, cannot look at these photos when I am ovulating for fear of rupturing an ovary and thus drowning my uterus in eggs. That said, there are few things more restorative, sweet, sexy and appealing than photos of Tom Hardy with dogs – provided you exercise great caution. Here are 11 of my favorites.

This is from the time Tom Hardy called me and said "Becca babes, put on your best finery and stick your tongue in my ear because we are going to a film premiere!" So I lept naked into his arms and this photo captured that moment. Lololol, the joke here is that I am a naked dog.

If Tom Hardy worries that he can't win you over with his sumptuous Mangelina Jolie lips, his smoldering gaze or his pectorals, he knows you will be his once he whips out the puppy. He is not wrong.

Tom Hardy and this dog got in a huge fight over which of them was cuter. After a vicious cute-off, they decided to agree to disagree and coolly hugged each other, eager to maintain a pretty facade for the cameras.

Tom Hardy knows that just because you're getting down and dirty, there's no reason to ditch the formal wear. The dude slicks back his hair and readjusts his tie pin before rolling around in the greenery with this pup, the better to fuel your self-love fantasies.

Tom Hardy's wink says, "I am kissing this adorable dog, but also, in my heart, I am kissing you."

Tom Hardy wants you to spurn all your worldly goods and come live in the wilderness with him. Look, he built you this nice cabin and an excellent rocking chair to do each other in. Also, he has procured you a dog. You know how much you love dogs. And also sex with Tom Hardy.

Tom Hardy wants you to pet this chilly puppy and them for you to warm your breasts in his frosty beard. Tom Hardy's kinky like that.

Tom Hardy heard that the guy you were seeing turned out to be not the greatest and he is NOT happy to learn that you were mistreated. He's going to kick some loser-dude ass for you, but first, he's going to allow this puppy to gaze at him with ardent devotion because Tom Hardy is powered by pure dog love and the blood of your enemies.

Tom Hardy doesn't need a pillow because he's got dogs. Tom Hardy says that you don't need a people either, because you've got him. Tom Hardy, I will rest on you.

Tom Hardy knows the secrets of the universe, and he is whispering them into this dog's ear. Sadly, the dog will miss all the pertinent info because he will be completely captivated by the feel of Tom Hardy's warm breath in his ear. For this, he cannot be faulted.

More like this
A Week In The Life Of Celebrity Makeup Artist Vincent Oquendo
By Jordan Murray
All The Products Hailey Bieber Used For Her Birthday Makeup Look
By Olivia Rose Ferreiro
Bustle Daily Newsletter: November 22, 2022
By Hayley Schueneman
Kim Kardashian On The Beauty Hack That “Changed My Life, My Skin, My Confidence”
By Taylor Jean Stephan
Get Even More From Bustle — Sign Up For The Newsletter