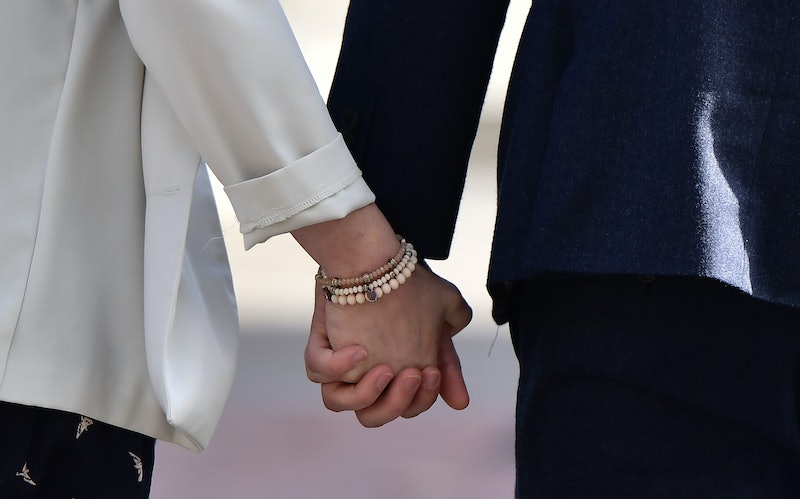 If you’ve ever wondered whether age matters in a relationship, I’ve got either very good news for you, or very bad news, depending on your outlook: According to a study from Emory University researchers Andrew M. Francis and Hugo M. Mialon, it does. A lot. And just in case the data itself wasn’t enough, data scientist Randy Olson has turned the numbers into a few handy-dandy graphs so we can visualize it in all its glory.

The study isn’t new — Francis and Mialon published their findings in a paper entitled "‘A Diamond is Forever’ and Other Fairy Tales: The Relationship between Wedding Expenses and Marriage Duration” back in September — and Olson has taken a look at its findings before (as have we here at Bustle). His first set of graphs was so successful that he’s created a follow-up set; these new graphs look at a few of the other factors identified as “keys to a stable marriage” that he didn’t cover the first time round.

Megan Garber at The Atlantic is primarily interested in the graph regarding the relative age of each partner. Here’s what it looks like:

In news that surprises probably no one, the bigger the age gap, the more volatile the marriage. While it’s only three percent more likely that partners with one year between them — as opposed to both being exactly the same age — will divorce, the figure jumps to 18 percent with just a five year difference. By 10 years, it’s 39 percent more likely; by 20 years, it’s 95 percent more likely; and by the time you get to 30 years? Well, let’s just say you may as well give up before you even begin.

Of course, as Garber notes, “If your partner happens to be 15 years older or younger than you are, that’s not automatically a bad omen: Statistics, of course, are not destiny.” But, she continues, “as predictors, the study’s findings stand to reason. Marriage is, above all, about 50-50 partnership; differences in ages also mean differences in life experiences and cultural reference points. Generations may be an invention, but they are meaningful nonetheless.” Sounds about right to me. Obviously who you enter a relationship with is an incredibly personal choice, but I’ve always had trouble picturing myself with someone either dramatically older or younger than I am; I can’t really reconcile being at a totally different point in my life than my chosen partner with the idea of “Yes, this is who I want to spend the rest of my life with.” But maybe that’s just me.

Olson’s graphs are all worth taking a look at, by the way; they’re all interesting (which makes sense, because the data itself is interesting), and they present the information in a way that’s a tiny bit easier to wrap your brain around. Consider, for example, the one under the heading “Sticking It Out With Your Spouse”:

The longer your marriage lasts, the less likely you are to divorce. What I find really fascinating about this one, though, is that it could be interpreted in so many different ways. Do couples who stay together longer really have better relationships? Or do couples stay together for other reasons, even when they know the relationship isn’t happy anymore? Say, financial reasons, or parenting reasons, and what have you? Or is it a combination of the two? Or something else entirely? Ultimately I suspect it’s much more complicated than one simple answer — but it’s interesting nonetheless. I’d kind of like to see another study delve into this topic — and I’d love to see Olson visualize it if and when it happens.

Check out all of Olson's graphs for on what makes a stable marriage at his website, and if you want to wade into the statistics yourself, read the full study here.