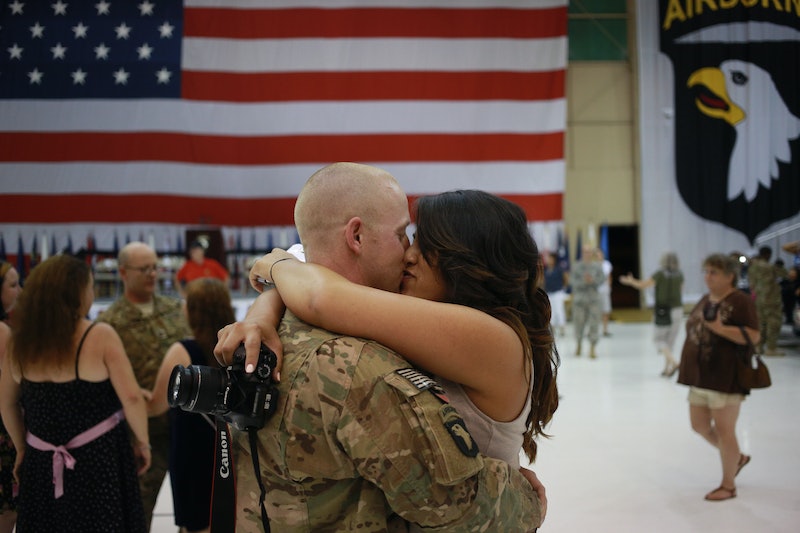 While the parades and ceremonies on Veterans Day are all fine and dandy, it's important to also remember that according to the Department of Veterans Affairs, 22 veterans commit suicide every day in the United States. I am not a veteran, and I don't know the first thing about the kind if courage it takes to join the military. But what I do know? Many veterans have a really rough time integrating back into civilian life, and they don't have nearly as much help as you might think.

I know that because I dated a veteran for two years, and during that time I had the heart-wrenching, eye-opening experience of witnessing how veterans in our country suffer at the hands of an oft negligent government.

Our men and women in uniform make an immense sacrifice, and many of them endure horrible events and conditions to protect our country and its interests, only to come home to even worse ones. We civilians will never really be able to understand what that is like. My ex-boyfriend, who I'll call Tyler, is an example of just how bad things can get for veterans in the United States.

after serving his country for several years, Tyler was left broke, depressed, and hungry, with little to no help from the government that promised to take his sacrifice seriously and honor him for it.

A little background on Tyler: He was an airman in the U.S. Air Force, and while he never saw combat, he did work on very intense, high security clearance projects for the better part of his early twenties. Tyler grew up poor in rural West Virginia, and once he realized college wouldn't be an option, the military was a last ditch effort to make something of his life. He spent several years in the Air Force until he was honorably discharged.

Tyler and I initially met in an online forum (how romantic) when he was 27 and I was 19. I fell hard. Age was just a number, anyway, and Tyler's real life experiences meant he would totally be able to help me navigate my teenage angst. He'd be able to take care of me (or so I thought). Once we realized that he lived relatively close to where I went to school in Ohio, we entered into a long distance relationship.

For the first few months, everything was wonderful. We were able to coordinate visits every couple of weeks, and we'd spend whole weekends with each other. We had so much in common, and we were obsessed with each other. My 19-year-old self couldn't have asked for anything better. He was my big, strong military man. I was dating a real-life superhero.

But, as with all relationships, the honeymoon stage eventually wore off, and a couple of problems came to light that proved to be serious deal-breakers. In particular, Tyler never had any money. He worked a dead-end job at a call center that didn't pay well — and was never going to. The little money he did make went entirely to his rent, his car, cigarettes, and fast food. If we ever wanted to do anything or go anywhere, the necessary funds had to come out of my pocket.

Why can't he just get a better job, I thought. Surely there are programs to help veterans find work after returning to civilian life? And yes, while there certainly are programs, they aren't ideal for everyone. The major obstacle standing between Tyler and a well-paying job was that he didn't have a college degree. And while the GI Bill exists explicitly to allow veterans to get their bachelor's degree after their service ends, Tyler wasn't lucky enough to be able to take advantage of it — the living stipend it afforded wasn't enough for him to support himself while going to school full time (it was roughly $800 a month at the time).

More disturbing however, in my opinion, is the fact that Tyler's local Veterans' Affairs (VA) office was maybe the least helpful, most disorganized government office I've ever seen or heard of — and I've dealt with the New York State DMV. Not only did Tyler need an education, but he also needed counseling for his PTSD.

While he was never deployed, Tyler was experiencing a worsening of preexisting mental health issues. The high intensity security training he'd experienced had only served to trigger him, and he needed help. From what he told me, his VA office had so many cases and so little availability that they couldn't have worked around Tyler's work schedule even if they'd wanted to. The delays he experienced were so bad that when it came out that some VA offices had lied to the government about them, I wasn't surprised. By 2013, the VA had as many as 900,000 backlogged claims from veterans who need assistance.

So, after serving his country for several years, Tyler was left broke, depressed, and hungry, with little to no help from the government that promised to take his sacrifice seriously and honor him for it.

As I'm sure you can tell, for many reasons, our relationship did not work out. As a 19-year-old, I wasn't nearly equipped emotionally or financially to support him, and he wasn't in a good enough place to help me through my oh-so-complex college problems. I remember laying awake at night in my dorm room worrying about where his next meal was going to come from, or how he was going to pay rent after he blew a tire or needed to get a new pair of shoes. I had drained my already nonexistent savings account to help him when I could, but eventually, the money ran out — and so did my energy.

Tyler took the break up really badly. By time I finally got the guts to come by and return my key to his place, his apartment was filled with trash and he was drinking heavily. I'm not sure where he is now or how his life turned out, because he cut off communication with me pretty soon after that. But I still worry about him all the time.

More than any sort of pity for him, I feel so incredibly disappointed in our government for not making sure each and every veteran is given the resources to readjust into civilian life. I'm a firm believer that no one should have to worry about where their next meal comes from, or when they're going to be able to see a doctor, and that only extends even deeper to those who have made sacrifices for our country's protection and safety.

While the parades and ceremonies honoring veterans today are great, they don't help people like my ex who are trapped in unfortunate circumstances. So, if you do anything to observe this Veterans Day, think of people like Tyler, who desperately need assistance from our government to live happy, fulfilling, and meaningful lives post-service — and who all too often, are being let down.

Editor's Note: You can find a list of charities dedicated to helping veterans here.