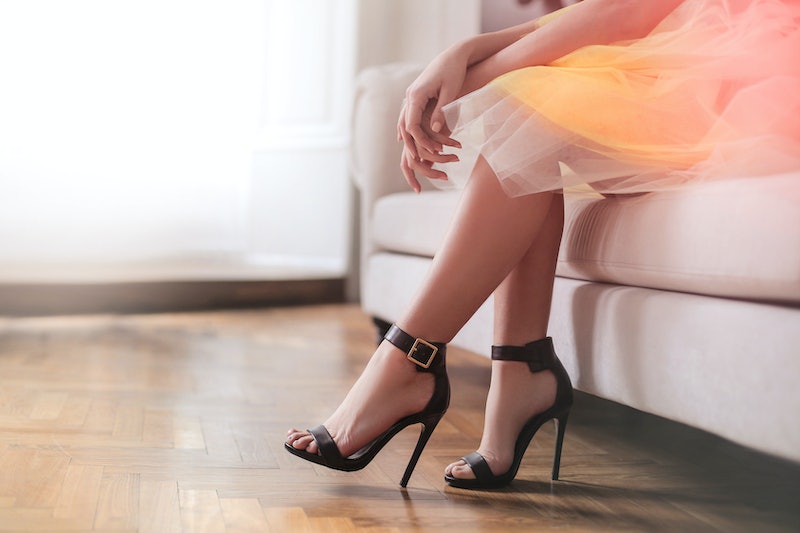 Being a woman is hard. Being a woman who, in any significant way, deviates from the norm of what is considered "beautiful" or "feminine" is harder. And one of the more common deviations from the ideal of femininity is being very tall, particularly when you're not model-thin. We've all seen very tall girls hunched over, pulling awkwardly at their clothes, or generally looking hyper-aware of the fact that they're taller than most of the guys around them – and hyper-aware that most of the guys probably aren't comfortable with it.

To learn more about what beauty means to tall girls, I spoke with my friend Cara* – who, at just around 6'1", fluctuates between a 10 and 12 US dress size – about the realities of living in her body. I asked her six big questions about beauty and femininity, and got some brutal truths in response.

1. What is dating like as a tall girl? Do you feel that it hinders you, or that you are perceived in a certain way?

"I definitely feel like I have to go out of my way to be passive, like I'm not automatically perceived as feminine in the same way I would be if I were even a few inches shorter. I make an effort to seem more feminine and less intimidating, and have even caught myself having a more high-pitched voice on first dates (and I ALWAYS wear flats on a first date, even if the guy is tall).

I'm on a dating site and I get A LOT of messages about my height in kind of weird, fetishy ways. And sometimes they can be flattering like "I love a tall girl," but a lot of times they're just totally weird. And the guys who are shorter than me often just avoid me entirely, because they don't want the socially shameful aspect of it. Honestly, I have dated guys a few inches shorter than me and didn't mind, but they definitely seemed to judge me based on it and be less comfortable than I was. So if I want a guy who doesn't really think of my height in any way, I have to date a guy who is 6'3 or above, which limits my pool a lot."

2. How do you feel that your weight/body size is judged, in combination with your height?

"To be blunt, we [as a society] only like tall girls when they are very thin. Then they become waify model types, which is perceived as the highest level of female beauty. I've had periods of my life where I basically starved myself to get down to a size 4-6, which on my height is really thin, and it was like I was a celebrity. People stared at me in the street in a good way, and I was treated differently. But I was also hungry all the time and depressed, so I started to eat normally again and now I'm "average" size. And when you're an average sized tall girl, you feel like an awkward giant, and people look at you totally differently (in a not-good way)."

3. Do you "compensate for" or "counteract" your height, the way a girl with a zit might put makeup on it, or a girl with a bigger stomach might wear a belt on her waist?

"I slouch a lot. Like, I have terrible posture and back problems from it, and honestly it only probably makes me look worse. But there are times when you just want to look less intimidating/"manly," and that feels like the most efficient way to do it. I dated a guy for a year who was an inch shorter than me and really insecure about it, and I basically spent that entire relationship slightly hunched over. It was awful. Other than that, I wear flats almost religiously and wear clothes that break up my body visually. When I was dating a guy who was 6'6, I would wear these long, plain black maxi dresses and look like a giant statue. But that is visually very intimidating, so I don't do that usually."

4. Do you like being tall? If cultural beauty norms and dating and all of that stuff were never an issue, do you enjoy your tallness?

"Well, obviously it's all I've ever known, because I've been the tallest in class since the third grade, and almost always as tall as the boys. So I don't really have anything to compare it to. But in terms of practicality, it's great for reaching stuff and seeing over people and, like, when I traveled in Japan this past year, it was like I had some kind of superpower. But it also sucks for airplanes and cars and stuff, so it's a give and take. I think I like it better than I would like being really short, though."

5. What does beautiful mean to you? Do you feel that you are beautiful, the way it has been defined for us?

"I think beautiful is partially how you carry yourself, but I am just like everyone else: I see girls that I wish I looked like and I think, "Oh wow, she's beautiful," and I'm jealous of her. Like, I see a girl sometimes who is 5'5" or so – a normal height – and she's just with some guy who is shorter than me but still much taller than her and I think that they look...right? They look right together. Because to me, she is beautiful because she fits into something, and she looks happy and natural. She looks really confident in her surroundings, and doesn't have to worry about slouching or what clothes she wears all the time. But at the same time, I'm sure that there are things she would change about herself, and she has other women she looks at as being beautiful.

I don't really think about whether I'm beautiful or not. I have nice skin and features and teeth I think, but overall, when you're really tall and not very thin there's an aspect of wanting to blend in. I don't go out of my way to stand out or wear things that attract attention, or a lot of makeup. Like, I want to be feminine and not come off as manly or intimidating, but I never go out of my way to feel "really girly," because I feel like that makes me look ridiculous and attracts too much attention. So I go for "pretty.""

6. What would you change about our beauty standards for women, if you could?

"I would make models and actresses more diverse. Our whole lives and self-esteem are defined by photoshopped images of one type of woman, and we end up feeling like shit for not looking like movie stars, when they are .0001 percent of the population. I wish we could have women of all shapes and sizes and colors represented so that we could start to see that as normal, and not have to feel like there's something wrong with us if we don't fit this one small paradigm. Like, one of the first women I saw who kind of looked like my body on TV was freaking Brienne of Tarth. How crazy is that?? Only in a fantasy show with a woman whose whole character is based on being tall and strong like a man can I see a woman who honestly kind of looks like my shape and size.

Honestly, I have it better than a lot of people, so I don't want to complain too much. But it just gets so frustrating when you receive all these messages on dating sites about how you're an Amazon, or people joke with you that your boyfriend "likes to climb trees." My body type is seen as something strange and weird and fetishized, because we almost never see women like me represented, even though we're all around. It would be nice to feel like I didn't have to be some fighter with a sword, and I could just be a normal woman sometimes."