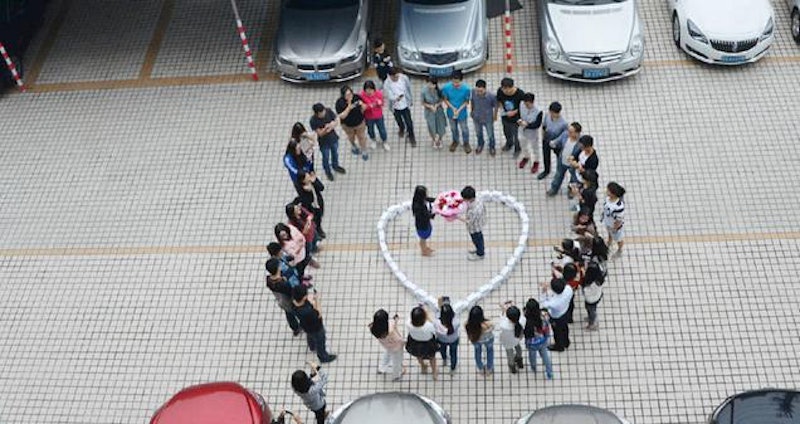 I’ve written many times about why I think public marriage proposals are almost always a bad idea — but in case you needed one more piece of evidence, here you go: A man in China purchased 99 iPhone 6s for a public proposal stunt… only to have his girlfriend turn him down. Womp womp.

According to The Nanfang, the man in question was a programmer from the city of Guangzhou. With “Singles Day” rapidly approaching — that would be November 11 (happy Singles Day, everyone!) — he decided that the best way to celebrate would be to make sure neither he nor his girlfriend would ever have to participate in the holiday again. To that end, he arranged an enormous and incredibly public marriage proposal stunt, which also happened to involve purchasing 99 brand new iPhone 6s (as Mark Shrayber at Jezebel wrote, “obligatory ’99 Problems’ reference here”). He set them out on the ground in the shape of a heart, called all their family and friends, attracted a good deal of attention from random passersby, and asked his ladyfriend if she’d marry him while the hoard of people standing around them snapped photos from their own smartphones…

…And she said no.

I’m unclear about what the iPhones were supposed to symbolize, but the fact that so many of them were involved in the first place makes it so much worse. It’s difficult enough having to deal with being turned down by the person you love in front of everyone you know, as well as a boatload of people you don’t know. Add to that the fact that you’re also out $82,000 and stuck with 99 phones you definitely don’t need? Yikes. Talk about a living reminder of your relationship’s failure. I suppose everyone, including the rejected suitor, should just be happy that no one caught the disaster on video. The pictures on Weibo are bad enough. Cringe.

Here’s the thing with public marriage proposals: Before you start planning one, not only do you have to actually, y’know, talk about whether or not you both want to get married in the first place — but moreover, you also need to talk about whether a public proposal is something you’d both be down with. “But wait!,” the public proposal proponents will say. “If you talk about it first, it won’t be a surprise!” Well, yes, that’s true — but that doesn’t change the fact that everyone has to be on the same page for a successful proposal to occur. And it doesn’t have to be a big deal, either: Once you’ve established that, yes, you’re at that point in your relationship where you’d both like to start thinking about marriage, all you need to do is ask, “So, when it comes to proposals, how do you feel about public ones?” — and then actually listen and take your partner’s preferences into account. Besides, knowing someone is going to propose isn’t the same as knowing when someone is going to propose, so it’ll still be a surprise when it happens.

Singles Day, by the way, is a relatively new phenomenon; it originated (mostly as a joke) at Nanjing University in 1993. It’s pretty much the equivalent of the “Singles Awareness Day” version of Valentine’s Day a lot of people celebrate, with the date — November 11 — chosen because of its proliferation of the number one. Young single people in China often throw themselves shindigs and buy themselves presents on Singles Day — and as well they should, because as we all know, fall is the best time to love yourself.

The moral of the story: If you think you’d like to get married to your partner, talk to them about it first. If they, too, would like to yoke themselves to you for eternity, then ask them their thoughts on public or flash mob-type proposals. There. Problem solved. Everyone wins!