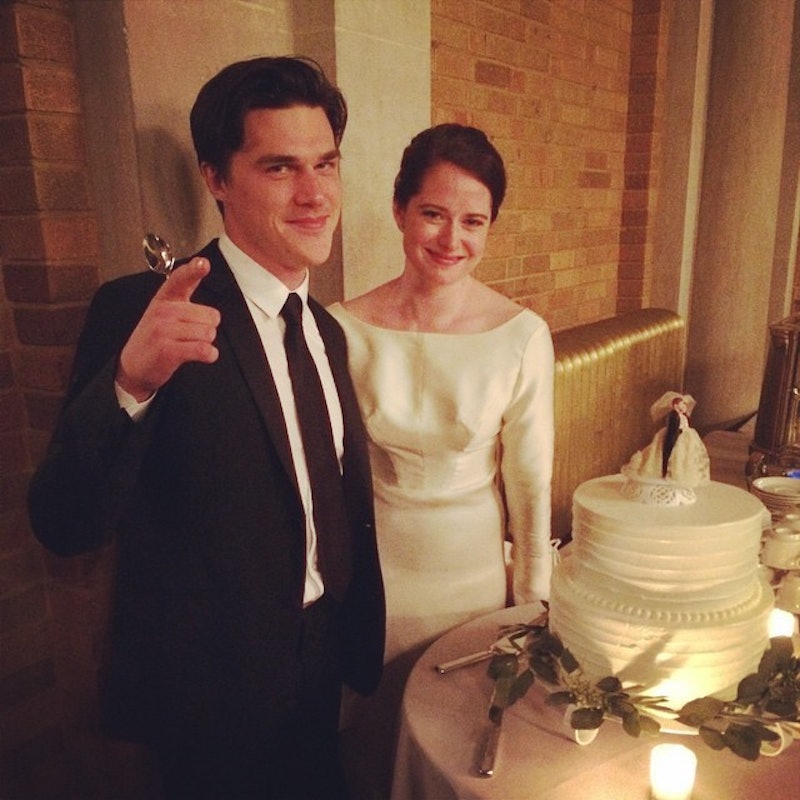 If you watch American Horror Story: Freak Show, you may know of a certain sadistic, maniacal, psychopathic character by the name of Dandy Mott. Or, as I like to refer to him as, the character that makes Twisty the Clown look like a cuddly savior. Sure, he's well-groomed and hella handsome, but he also makes my skin crawl the instant his beautiful face shows up on screen. So, it's sort of amazing that anyone besides Dandy's mother wants to be around him considering he had the absolute audacity to kill Patti LaBelle (may Dora rest in peace) AND Matt Bomer. But, in real life I guess he isn't so terrifying (I GUESS). His actual name is Finn Wittrock, significantly less unsettling than "Dandy," and he even has a wife. Like a real, live woman that isn't a clown or a caretaker. I'm rocking your world, aren't I? So who is Finn Wittrock's wife? Besides fearless, here's what else we know.

Wittrock's wife is named is Sarah Roberts and she's a pretty low key kind of lady. There isn't much to go on with her, other than her marriage which happened back in October of which there are plenty of pictures. But not everyone loves the spotlight. It's totally understandable. Here are some things we did find on the woman brave enough to marry Dandy, though:

And so did her new hubby. According to the Daily Mail they both attended the school. Plus, multiple sources refer to Roberts as Wittrock's, "long time love" which means they were (probs) college sweethearts. If that's not cute, not too sure what is.

Looks like she has a fancy shmancy job. According to jcobando.com, "Juan Carlos Obando is a Los Angeles based women’s wear and accessories brand founded in 2008. His work is defined by the powerful use of color and an unassuming approach to eveningwear."

She and Wittrock look impossibly happy together

She made a beautiful bride

More like this
Nicola Walker’s IRL Husband Is No Stranger To TV Screens
By Darshita Goyal
Who Is Tatiana Maslany Dating? The 'She-Hulk' Star Is Married To 'A Locke & Key' Actor
By Radhika Menon
Stephen Graham’s Wife Plays A Vital Role In His Career
By Emma Madden and Sophie McEvoy
13 Daenerys Targaryen Quotes To Get You Fired Up For 'House Of The Dragon'
By Marina Watts
Get Even More From Bustle — Sign Up For The Newsletter