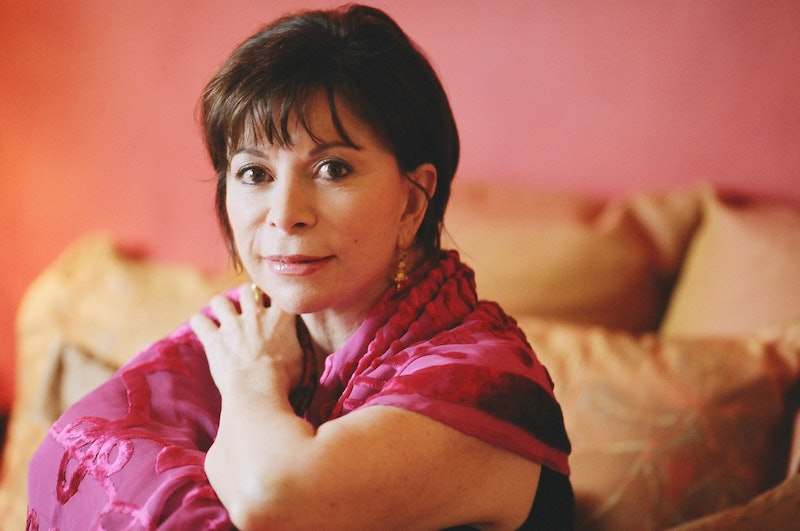 On Tuesday, President Barack Obama announced the 19 recipients of the 2014 Presidential Medal of Freedom, and Chilean author Isabel Allende is on the distinguished list. The medal is the highest civilian honor in the United States, and it's given to those who have made notable contributions to the country's security and national interests, world peace, or to other significant cultural endeavors.

Allende is the author of 21 books in Spanish, which are translated into English and more than 30 other languages, and she has sold more than 56 million copies. She is of particular importance because of her representation of women, and her use of magical realism to connect myths and realities in her works — often compared to her Latin American peer, Gabriel García Márquez. One of her most famous works, Paula, is a heartbreaking and courageous memoir of her childhood growing up in Santiago, Chile, told through the lens of her daughter's tragic death from a metabolic disease.

In fiction, she's best known for her first published novel The House of the Spirits, which spans four generations of a Chilean family, and City of the Beasts, set in the Amazon rainforest. Most recently, Allende released her novel Ripper , a crime story set in San Francisco.

Allende has won more literary awards than anyone could count on both hands and feet. In 2010, she won Chile's National Literature Prize. In United States, she has been awarded the Hispanic Heritage Award in Literature; the Dorothy and Lillian Gish Prize, which is given to "“a man or woman who has made an outstanding contribution to the beauty of the world and to mankind’s enjoyment and understanding of life"; and dozens of individual book awards. She's also taken home Denmark's prestigious Hans Christian Andersen Literary Award.

President Obama had these words to say about his 19 new recipients of the Presidential Medal of Freedom:

From activists who fought for change to artists who explored the furthest reaches of our imagination; from scientists who kept America on the cutting edge to public servants who help write new chapters in our American story, these citizens have made extraordinary contributions to our country and the world.

Other recipients this year include Tom Brokaw, Ethel Kennedy, Stephen Sondheim, and Meryl Streep. Winners will be given their awards during a November 24 ceremony at the White House.