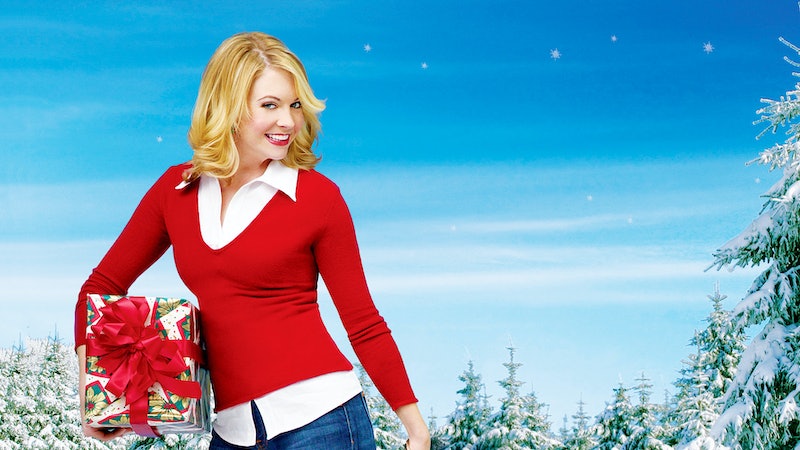 It's that time of year again. Snow is falling, trees are illuminated with lights, and ABC Family is beginning their Christmas programming schedule. But if you don't find Toy Story 3 or The Little Mermaid particularly festive films, and you hate Vince Vaughn's Fred Claus and don't understand why they're playing it six different times, don't worry. Netflix has you covered and so does the ABC Family website. You can get into the holiday spirit on your own time by watching ABC Family original Christmas movies, all available to stream instantly.

But with 12 titles to choose from it can be hard to make a decision. (Of course there would be 12. What a perfect number for a Christmas movie selection.) Finding the hidden gems of the ABC Family originals world is tricky, but it can be done. Surprisingly not every movie they've made is super cheesy. Some are actually pretty decent. And even some of the corny ones will leave you feeling all warm and fuzzy inside, and not just because you're also drinking eggnog.

I'm not going to lie, I watch them all year round. So I've put my expertise to the test to rank each of the 12 films so you'll know which ones to watch this holiday season. Here they are ranked in order from worst to best. Enjoy and happy binge-watching!

How I Met Your Mother's Ashley Williams stars opposite Tom Cavanagh's Nick Snowden (A.K.A Santa). The movie is about how one reindeer escapes the North Pole and gets captured by a big game hunter. Meanwhile Nick and Williams' character Sandy find each other and (guess what) love. It's a little too cheesy for me and Cavanagh's acting style is really distracting and overly socially awkward. Which is a shame because I do love Ashley Williams.

This is only slightly better than the original because the whole captured reindeer subplot isn't the main attraction. Instead Cavanaugh's character gets amnesia and Williams must convince him he's Santa before Christmas is ruined. The "we must save Christmas" angle is a little too cliche for me to like this film that much.

Another film about holiday amnesia! Granted it came out five years later but it's no less predictable. Jenny Garth's character wakes up thinking she's married to her childhood sweetheart and sees what her life would have been like if she wasn't one of those darn career women. I hate the "she has it all but she still needs a man" angle. Also most of this movie takes place during Thanksgiving which makes it a pretty poor Christmas film.

Santa has a mid-life crisis and Jenny McCarthy (his daughter) has to step up to fill his shoes. This is another one of those movies that asks whether or not a woman can have it all. I'm so over that. Besides, they don't have the first Santa Baby on Netflix so you'd be jumping in midway on this one. I'd skip it.

A modern day take on A Christmas Carol, Tom Arnold hates the holidays and is taken back in time to make him more compassionate. But the film gets an interesting twist when the Ghost of Christmas Past decides he doesn't want to do his job anymore and sends Christmas Present (a gorgeous woman) and Arnold on an adventure to capture the Past. It's not my favorite film because it's still pretty predictable, but I did appreciate that they deviated from the standard Scrooge tale a bit.

Gotta love a badass bounty hunter who takes down mobsters. I was pleasantly surprised by this film because I totally though professional wrestler The Miz was going to be a terrible actor, but he wasn't so bad. However, the film was tainted a bit by the over-the-top New Jersey stereotypes and the fact that the main character totally ends up with the wrong guy. I'd watch it again, but maybe only if nothing else was available.

This one came out after Glee hit it big so naturally it combined Christmas and singing competitions all in one. I do love Tia Mowry but I can't stand Tori Spelling. Thankfully Spelling played the villain so you didn't have to like her. If you like musical movies then you'll probably enjoy this flick.

This is kind of a fun film if you're one of those people wistful for another era. The main character is tired of her overbearing family and wishes she could have a perfect Christmas. But when perfect isn't all it's cracked up to be she learns that any family, no matter how annoying, is better than none. Corny, yes. But also sweet.

To save her mall, Jennifer organizes a competition for sexiest santa clause. But beneath his flat abs and charming exterior, David is just trying to save his family's pizza restaurant. Insert cute pie-making scene here, complete with flour tossing and giggling. Nick Zano's character David is really attractive though, so I watch the film mostly for him and his adorable dimples.

This film follows the format of Groundhog's Day in that our heroine must relive Christmas Eve 12 times until she gets everything right and falls in love. It sounds cheesy on the surface, but to be honest this is my favorite ABC Family film. It captures that feeling of being alone at the holidays really well and also shows that one might find love in the most unexpected of places.

Who of us hasn't contemplated kidnapping a cute boy to take home for the holidays? (Not every one needs to be in a relationship, mom!) Relive your childhood with Sabrina the Teenage Witch's Melissa Joan Hart and Saved By the Bell's Mario Lopez as she forces him to pretend to be her boyfriend to get her family off her back. It's the perfect Christmas film.

More like this
Lindsay Lohan Explained That 'Mean Girls' Homage In 'Falling For Christmas'
By Brad Witter
You’ll Be Able To Stream Bullet Train Before The Holidays
By Arya Roshanian and Radhika Menon
How To Stream Knives Out 2: When Will Glass Onion Be On Netflix?
By Radhika Menon
Here’s Everything Coming To & Leaving Netflix In December
By Jake Viswanath
Get Even More From Bustle — Sign Up For The Newsletter