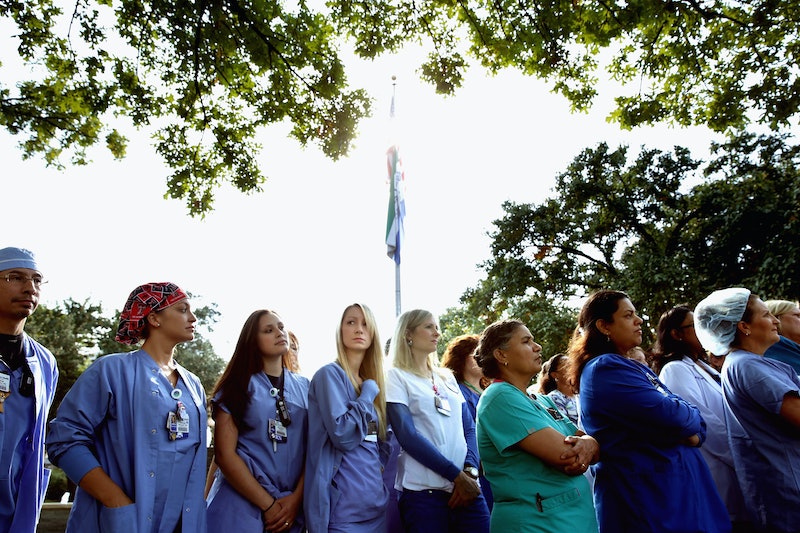 In the fight against inadequate preparedness for the virus, more than 100,000 nurses will strike and hold vigils across the globe on Global Ebola Awareness Day. In 16 states, including Washington DC, and five countries on Wednesday, nurses will take a stand against what they believe is substandard nurse and patient care that has been magnified by Ebola cases.

Nurses are rallying for proper equipment and training for health care workers who encounter Ebola patients. This includes full-body hazmat suits (including proper training on how to remove the suits without exposure), air purifying respirators, and "continuous, rigorous interactive training" at hospitals.

The NNU, the largest professional association and union for registered nurses, announced the planned strikes, vigils, and rallies in a press release on Tuesday. A day before national protests began, 20,000 RNs in California went on a strike that affected 88 hospitals across the state, 86 of which are owned by Kaiser Permanente.

Organized action is planned in California, Washington DC, Florida, Georgia, Illinois, Maine, Massachusetts, Michigan, Minnesota, Missouri, Nevada, New York, North Carolina, Ohio, Tennessee, and Texas, with similar action to be taken in Australia, the Philippines, Canada, Ireland, and Spain. Although President Barack Obama will miss the vigil planned in front of the White House, actions are planned in Australia, where Obama is visiting as part of the G20 summit of world leaders.

Proper protection against the deadly virus doesn't seem like an unreasonable demand from the people who put themselves on the front lines of the disease's treatment, but the NNU says that Congress has repeatedly ignored pleas to hold hospitals up to standard.

RoseAnn DeMoro, NNU's executive director, told The Washington Post that the lack of response could have something to do with the profession's make-up.

It’s a women’s issue. If this were a [predominantly] male profession, the dialog would be different.

A 2008 report by the U.S. Department of Health and Human Services said that only 9.6 percent of RNs employed and licensed in 2000 and on were men. This was a jump from the 6.2 percent of male RNs licensed before 2000.

In the NNU press release, DeMoro said that nurses were an integral part of the fight for Ebola, and that patient care should be a primary concern for hospitals.

If nurses had not taken to the air waves, to the streets and to the legislatures, there would have been inaction on Ebola. Everyone passed the buck. The Centers for Disease Control had no power, and Ebola is the latest in health threats, there will be more to come. Nurses are demanding patient safety. They are heroes. Hospitals should be forced to spend the money on patient safety that they spend on public relations.

On Tuesday, the University of Michigan Health Systems and the Michigan Nurses Association brokered what is believed to be the first contract designed to protect nurses treating Ebola patients. The details of the contract include standards for training, gear, and time limits on how much time a nurse can spend with a patient infected with Ebola.

More like this
How The City Healed Five Years On From The Manchester Arena Attack
By Ella Glover
How To Support Gun Control Reform Right Now
By Morgan Brinlee and Carolyn Steber
Plan C Vs. Plan B: What's The Difference?
By Lexi Inks
The Church Of Scotland Votes To Allow Same-Sex Marriages
By Sam Ramsden
Get Even More From Bustle — Sign Up For The Newsletter