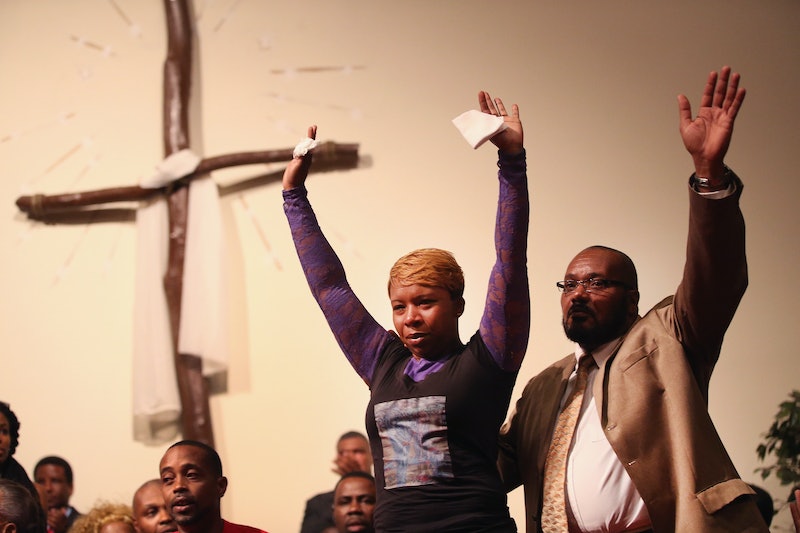 Searching for justice, the parents of Michael Brown testified before the United Nations Committee against Torture on Wednesday about the mishandling of their son's case. Brown, an unarmed black teenager, was shot and killed by a white police officer in Ferguson, Mo. in August, sparking mass protests and starting a national conversation about police killings of black males. Before the Committee, Lesley McSpadden and Michael Brown Sr. called for systematic investigation into U.S. policing practices that unfairly target racial minorities, sometimes with deadly consequences.

Brown, whose death has sparked mass protests in Ferguson and around the country, was killed after he and a friend were stopped by Officer Darren Wilson on a Ferguson street. After an altercation broke out with Wilson, Brown turned to run away as Wilson began shooting. According to multiple eyewitnesses, Brown had his hands raised and was calling “Don’t shoot” when Wilson fired the final shells.

The police account of Brown’s death differs markedly from the version detailed in the report. According to the Ferguson Police Department, Wilson shot the 18-year-old in self-defense after Brown assaulted him and went for his handgun.

On their first trip outside of U.S. borders, McSpadden and Brown Sr. joined with HandsUpUnited, the Organization for Black Struggle and Missourians Organizing for Reform and Empowerment to take their case before the Committee.

Reading from a written report in a closed-door hearing, the couple testified that Brown’s shooting and the police force’s militarized response to the mostly peaceful protests in Ferguson in the ensuing days both violated the UN Convention against Torture and Other Cruel, Inhuman or Degrading Treatment or Punishment:

The intentional, arbitrary killing of Michael Brown, shot to death by Ferguson police officer Darren Wilson, amounts to torture under Article 1 of the Convention.

Article 1 defines torture as “any act by which severe pain or suffering, whether physical or mental, is intentionally inflicted on a person” at the instigation or with the consent of a public official in order to punish, intimidate or discriminate against him.

Brown’s parents ask the Committee to call for the immediate arrest of Wilson as well as a serious investigation into and curtailment of racial profiling practices in the Ferguson Police Department.

A grand jury is expected to decide by the end of the month whether or not enough evidence of wrongdoing exists to charge Wilson with the wrongful death of Brown. Missouri is already preparing for renewed protests if that grand jury’s verdict turns in Wilson’s favor: gun sales have spiked in Ferguson, the police are stocking up on riot gear and Gov. Jay Nixon (D) has announced increased security measures to thwart protests that could become violent.

The police response to the first wave of protests following Brown’s death also fell under intense scrutiny in the civil rights groups’ report. Citing U.N. Special Rapporteurs on Torture who have investigated the misuse of tear gas, rubber bullets, batons and other forms of crowd control, the report claims that the Ferguson police tactics against protestors violated Article 16 of the Convention, which bans “other acts of cruel, inhuman or degrading treatment or punishment." The report notes:

Law enforcement officials used the few isolated incidents of property damage or violence as justification to engage in brutal repression of protesters and those living in the neighborhoods surrounding protest areas, using intimidation tactics and disproportionate force without distinction or regard for who would be harmed.

If the UN Committee is sympathetic to McSpadden and Brown Sr.’s testimony, the 10-person panel of expert investigators can do little in terms of legal enforcement. But by taking a closer look at U.S. policing practices– particularly when it comes to the spree of police violence towards unarmed black males – the Committee could exert international pressure on the U.S. to take the issue seriously.

The report submitted by McSpadden, Brown Sr., and the civil-rights groups concludes:

More concrete steps beyond investigations need to be taken to ensure that law enforcement is held accountable for racial profiling and excessive use of force. Not only do officers need to be prosecuted, but significant reform including more intensive training on racial bias, reporting and monitoring must be implemented to prevent rights abuses like the tragic killing of Michael Brown. Recent incidents of police brutality…underscore the U.S.’s failure to adequately address brutality and racial profiling by law enforcement.

The lack of accountability and action from Ferguson and Missouri elected officials motivated McSpadden and Brown Sr. to seek out the UN Committee.

We need answers and we need action, Brown’s mother told CNN in Geneva. And we have to bring it to the U.N. so they can expose it to the rest of the world, what's going on in small town Ferguson.

Taking Brown’s case to the UN does more than enlist global allies. Shifting the terms of the debate means that we can start to frame his death, along with the deaths of Eric Garner, Ezell Ford, and so many others, not as unfortunate but unavoidable byproducts of American policing, but as a systematic, preventable and fundamentally unjust misuse of state power.