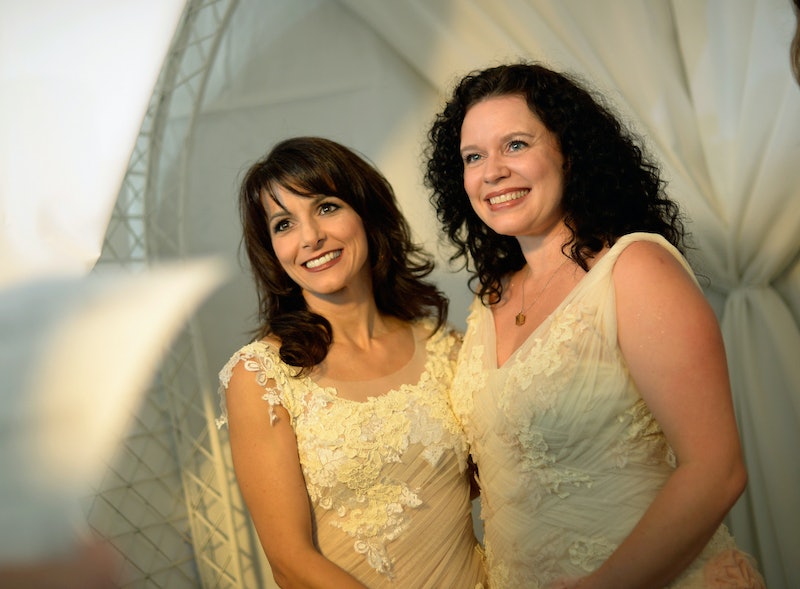 Good news, everyone! A federal judge struck down South Carolina's same-sex marriage ban Wednesday, meaning the the Palmetto State will soon be joining the marriage equality party. Marriage aren't moving forward just yet — according to the AP, the order will delay the start of new marriages until Nov. 20. But regardless, it's got to be one of the biggest days in recent history for the LGBT citizens of South Carolina, and that's a big, big cause to celebrate.

Obviously, there will be the usual, potential hangups going forward — South Carolina has a Republican governor and administration, which may try to fight the ruling — but the national tide on this issue is as obvious as can be. Before Wednesday’s decision, there were 32 states which allowed legal same-sex marriage — an absolutely staggering figure compared to the lay of the land in recent years. In fact, this time last year, the total number of states with full marriage equality was a mere 13.

Nowadays, same-sex marriage in the United States is a majority proposition, a turn of events which speaks both to the tireless work of advocates and activists, and the steadily improving attitudes of everyday Americans towards their gay and lesbian neighbors. Simply put, we’re getting to witness the fruition of a long-term civil rights campaign right before our eyes, and it’s awesome to watch.

The ruling, by U.S. District Judge Richard Gergel, determined that the state's same-sex marriage ban — approved by voters in 2005 — was unconstitutional. South Carolina Governor Nikki Haley told the media in October that she and her administration intended to "continue to uphold the will of the people," which is a familiar refrain for GOP governors whose states have had bans overturned by federal rulings. It's exactly what notoriously conservative Supreme Court Justice Antonin Scalia warned would happen after the Court struck down the Defense of Marriage Act in 2013.

Of course, he (like countless religious-minded, so-called traditionalists) was trying to raise the alarm bells to the similarly anti-equality bastions of the United States. In simplest terms, the ruling of the high court has freed up countless lower federal courts to come down on the side of same-sex marriage, which is why so many normally blood-red Republican states now find their bans overturned. Both South Carolina and Oklahoma are prime examples, and there are pending appeals holding up marriage equality in places like Texas, Louisiana and Florida.

Basically, this is just another link in a long chain of victories and milestones for the LGBT rights movement in America. It'll be important to keep an eye on — there's no telling how long it'll take for new marriages to begin in South Carolina, given Haley's desire to appeal — but for the time being, let yourself feel a little satisfaction. The country just got a tiny bit better.