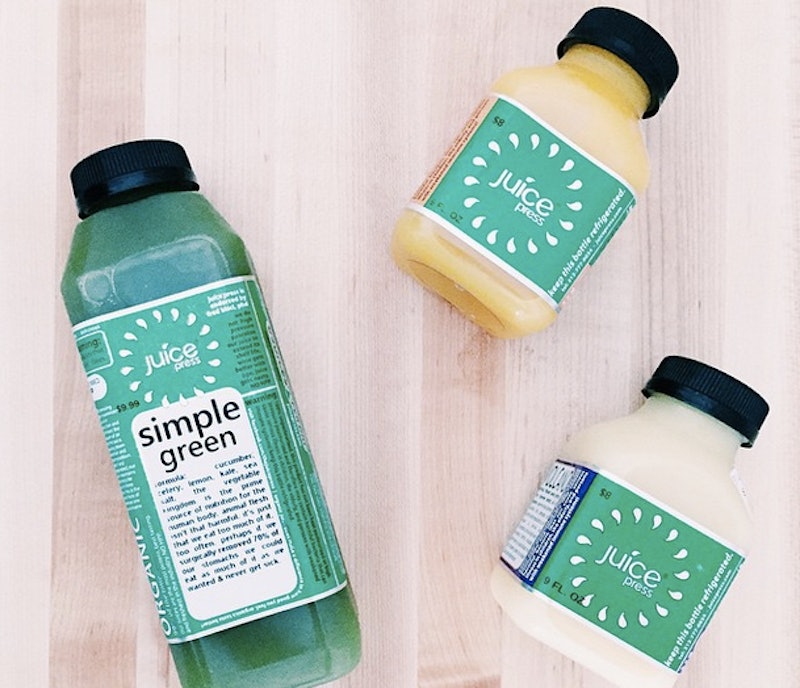 Wanting to get healthy is a normal, usually positive thing. A great number of us exist in largely sedentary (office-based) lifestyles, and have access to near-limitless unhealthy food options, so it's nice sometimes to really buckle down and focus on making smart choices about which things you're putting in your mouth. But often, we confuse an effort to "get healthy" with a desire to "lose weight in a quick and relatively easy way", we err into "disordered eating" territory. And honestly, with as little comprehensive health education as most of us have received, it's easy to confuse "cleansing our bodies of toxins" and "consuming so few calories that we are constantly on the verge of passing out."

To be clear, I'm not saying that everyone who diets has an eating disorder (definitely am not saying that), nor that people who do have eating disorders are simply making poor choices (that is clearly not true at all). What I am saying is that a lot of what we have come to accept as "healthy lifestyle routines" are actually damaging and hurtful to our overall health – and it's beyond time we call these things out and start doing better for ourselves.

And while it's not always cut-and-dry, these five "healthy routines" are much more dangerous than the trendy lifestyle magazines (I'm looking at you, GOOP) would have us believe.

There is nothing wrong with supplementing parts of your diet with nutritionally-dense green juices – aside from the fact that, at least here in New York, they're about a billion dollars apiece – but there is something wrong with making that your entire diet, for days on end. The internet abounds with articles by normal people who tried to follow this diet for several days, only to realize that consuming half of your normal calorie intake and no longer chewing was not terribly sustainable. And having attempted just a day of the liquid diet myself, I can assure you that "nearly passing out on the train ride home" should not be a part of any healthy lifestyle choice.

2. Diets that cut out 90 percent of what you normally eat

There is only so long one can live on a raw vegan paleo gluten-free nut-free no-sugar no-alcohol diet. And not being able to stick to it for any significant period of time is not a great moral failing, it's just the result of being human. Making radical changes that get rid of the vast majority of your normal food intake almost guarantees you for failure, and that you'll end up overcompensating by binge eating all of those Zebra Cakes you have been craving all week.

The Master Cleanse is a socially acceptable form of disordered eating. I'm sorry, but living off of water, lemon, maple syrup, and cayenne pepper is the diet of a starlet in Hollywood who has to drop five pounds in a few days for a photo shoot and has no means to do it other than essentially starving herself and tricking her metabolism into thinking that it's getting enough to survive.

The dubious idea of "cleansing the body of toxins" is counteracted by the fact that it literally takes out everything potentially healthy you put into your body. You'll lose weight, but in the worst (and least-sustainable) way. Model Chrissy Teigen often talks about going on cleanses (juices or Master) to drop weight for a shoot, and openly discusses the degree to which she gains everything back immediately after stopping. Even she knows that her body needs a lot more than what it gets during a cleanse.

If you are using laxatives, Adderall, metabolism-boosting "herb" pills, or anything else to help your diet be more effective, you have a problem. At no point is using drugs to help you be healthier a good (or in any way sustainable) choice. The fact that the active ingredient in most of these supplements is speed, and therefore puts your heart at risk, automatically cancels out whatever health benefit you thought it had. Just because taking a pill to lose weight is common, doesn't mean it is okay or even especially safe.

Perhaps the most common form of problem eating amongst women is the constant mental chart-keeping of "what I allow myself to have" based on "what I did today." Constant rationalization of what we eat, self-shaming over our benign choice to have a cookie, or compensating for a little pizza with hours of obsessive exercise that we must talk about on social media so everyone knows: These are all the activities of someone with a bad relationship to food.

Moralizing and tying our self-worth to how much exercise we are physically capable of, and how much we can deny ourselves the food we want, are two of the more dangerous norms we've absorbed from our culture. A million environmental influences are perpetually telling us what the "right" choices are in terms of diet and exercise, and that we should feel intensely guilty and inferior when we are unable to uphold those standards. So we set rigid rules for ourselves, and inflict self-penance when we step outside of them. It's not unusual for a group of young women to have an entire conversation about the kinds of foods we eat, and the excuses we need to make for them. But that doesn't mean we can't recognize this for the hugely unhealthy attitudes that they are.