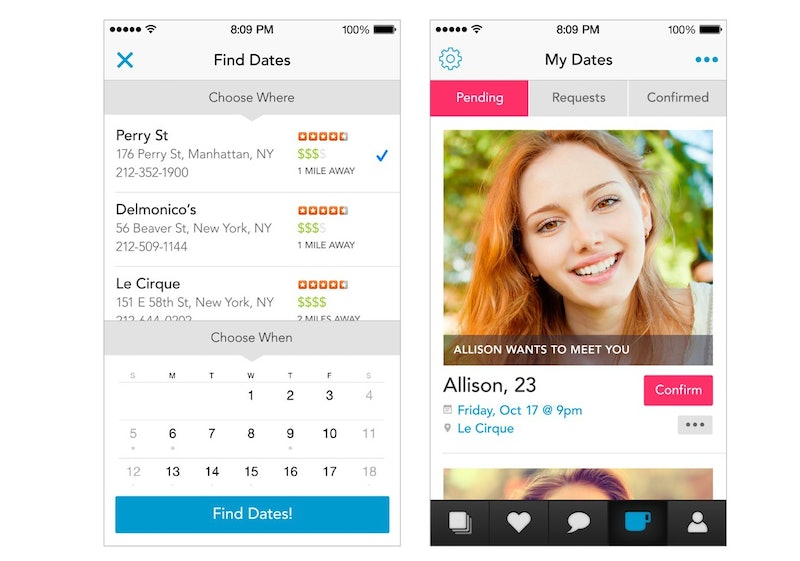 Some people enjoy dating — but I am definitely not one of them. It’s not even the dates themselves that can be so stressful (although goodness knows making small talk over a cheap cocktail for an hour is daunting enough); it’s arranging the in-person meet-ups in the first place. But one online dating app is attempting to change all that with the launch of a new feature: Clover’s "On-Demand Dating" service is set to debut by the end of the year, and if all goes as planned, it’ll making dating as easy as ordering your regular Tuesday night dinner from your favorite takeout place on Seamless.

Clover first hit the scene back in April with the goal of combining the ease of Tinder with the (relative) transparency of OKCupid. It’s similar to other online dating apps in that it involves scrolling through potential matches and either liking them or nixing them; it’s also location-based, although you can turn off the GPS if it freaks you out (if I were actively dating right now and using Clover, I would probably utilize that feature). However, unlike Tinder, it doesn’t ask you to make a split-second decision about someone before showing you more matches — it lets you take your time. Said Clover rep Miranda McCurlie to the Daily Dot when the app launched, “Clover doesn’t try to force you to use the app in a linear way. We want to create a versatile experience that you can control… you can just keep scrolling and come back later.”

Online dating still has a number of flaws, though; Clover cites these four issues as the primary problems most apps and websites have yet to solve:

There’s not really a lot of innovation going on these days, which means dating is starting to get stale (again. It’s a vicious cycle). In an effort to solve these problems, however, Clover is launching something called “On-Demand Dating.” Building off of the app’s existing format, On-Demand Dating operates sort of like the high-tech version of a blind date: Instead of getting set up by your friends, you get set up by the app. All you need to do is tell it where and when you want to meet, and it takes care of the rest. Once it’s found you a potential match, it gives you the chance to review that match’s details before confirming the date; it’ll even suggest places to meet based on popularity and price.

Said Issaac Raichyk, Clover’s CEO, in a release, “Our new on-demand service will find people that actually want to meet you and you’ll be able to find a date as easy as it is to order a pizza or a cab. Our goal is to streamline the entire dating process.” He continued, “Combining on-demand dating with our existing social discovery format provides people with a unique and efficient way to meet new people.”

I’m not dating right now, but if I were, I’d probably give On-Demand Dating a shot once it debuts. It’s expected to hit the app by the end of 2014, so consider this your heads-up. Even if you don’t end up with the guy or gal of your dreams, at least it’ll give you a few fantastic stories to tell, right?

Snag it for free on the iTunes App Store. Happy dating!

More like this
Are Sagittarius & Sagittarius A Good Match? Astrologers Weigh In
By Kristine Fellizar
How Does The Hinge Algorithm Work? An Insider Explains
By Lexi Inks
Here’s How To Find Your Spotify Wrapped
By Emma Lord and Emma Carey
Here’s How To Turn On Instagram Post Notifications
By Megan Grant and Alexis Morillo
Get Even More From Bustle — Sign Up For The Newsletter