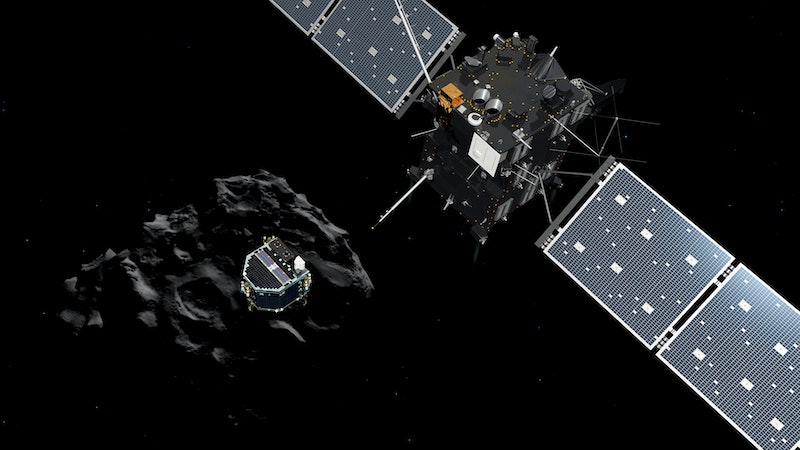 The human race is in the middle of a collective victory lap right now, because we just landed a probe on a freakin' comet. The amazing feat happened around 10:30 a.m. on Wednesday, thanks to the European Space Agency. It's a big deal because this 220-pound robot (named Philae) will be able to collect data from the comet, including soil samples. This data will tell us more about comets than we've ever known before. Aww yiss.

Philae's carrier, Rosetta, was initially launched in 2004, because it needed ten years to build up the momentum to get to the comet. Because the comet is kind of wonky shaped, Rosetta has been orbiting it for three months to find a primo landing spot. According to ESA, the landing was mostly successful, but Philae might tip over if they aren't careful.

The landing has become something of an Internet sensation because of course it did. Everyone loves space, right? Right? And like all Internet trends, it now has its own set of hashtags. But, because the Internet is also a horrible vortex filled with Negative Nancys, not everyone is excited about the comet landing. It's these guys, along with Debbie Downers, that spawned the #WeCanLandOnACometButWeCant hashtag, in order to rain on everyone's space-themed parade. However, what started as a potentially negative hashtag has spawned some brilliant (and pretty funny) stuff.