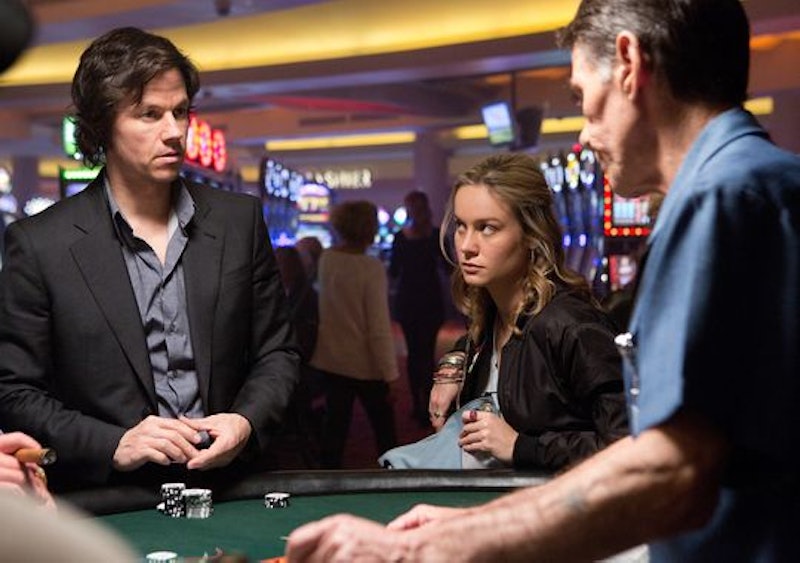 2014's Mark Wahlberg flick (No, not Transformers 4) surprised in many ways. The Gambler , directed by Rupert Wyatt, shouldn't be immediately judged by its name or cast. Wahlberg, known for his blockbuster action flicks, over-sized biceps and buddy comedies like Ted, has truly transformed for what is the most convincing role of his long career. Not only did he lose more than 60 lbs for the role, he convincingly rattles off seven-page long monologues as an English professor — this coming from a man who never graduated high school. (Though, to his credit, he did earn his GED years later).

The Gambler is impressive for its cast (Jessica Lange, John Goodman), razor-sharp dialogue throughout, and gorgeous Los Angeles cityscapes. But there's one thing it is inevitably missing, and the film's director isn't shy to admit it. Though boasting a handful of superbly crafted male characters — with complex motives and quotable dialogue — The Gambler's love interest, played by indie darling Brie Larson, is fairly blah.

"Female characters can so often just serve the protagonist, which more often than not is male," Wyatt said. "If you don't get a good actress in — let's be honest, what is an under-written role — you're dead."

Larson's Amy is a student in Jim Bennett (Wahlberg)'s class. She's brilliant, but shy, and we're only privy to her genius-level of intelligence thanks to a monologue given by the professor, singling her out during a lecture. If it weren't for our male protagonist telling us she's a whizkid, we'd never know, because her allotted screen time only exists to serve the goals of Wahlberg's Bennett. It's obvious to say this film could never pass the Bechdel test — I don't recall two female characters appearing in the same scene together, outside of topless strippers at a nightclub.

"I say this with all sincerity, every single person in this movie was my first choice," Wyatt said during an interview with Los Angeles based press. "Brie I saw in Short Term 12. She has a thankless, tough job."

Those who have seen Larson in Short Term 12 know the reach of of her capabilities, a more than capable young actress who's emotional range is undefinable. With a role as vanilla as Amy, I was surprised Larson would tackle the job, but it make sense: Give a mediocre role to an incredible actress, and perhaps she'll add weight to the character with her own presence.

"I find it increasingly frustrating in modern cinema, and it needs to change," Wyatt says of under-written female characters. "With someone like Brie, it screams: why is she not in this more? She has this amazing ability without saying anything, to convey the right emotion."

While The Gambler might be lacking in strong female roles, it's still a film worth indulging in, if only to hear John Goodman's "F*ck you" monologue.

The Gambler hits theatres December 19. Watch the trailer below.

More like this
UK Viewers Will Have To Wait To Watch The Handmaid’s Tale S5
By Maxine Harrison
14 Women To Watch This Oscar Season
By Marina Watts
An Extremely Messy Ranking Of What Actually Happens In 'Don't Worry Darling'
By Chloe Foussianes
Paul Mescal, Man Of Mystery
By Samantha Leach and Heather Hazzan
Get Even More From Bustle — Sign Up For The Newsletter