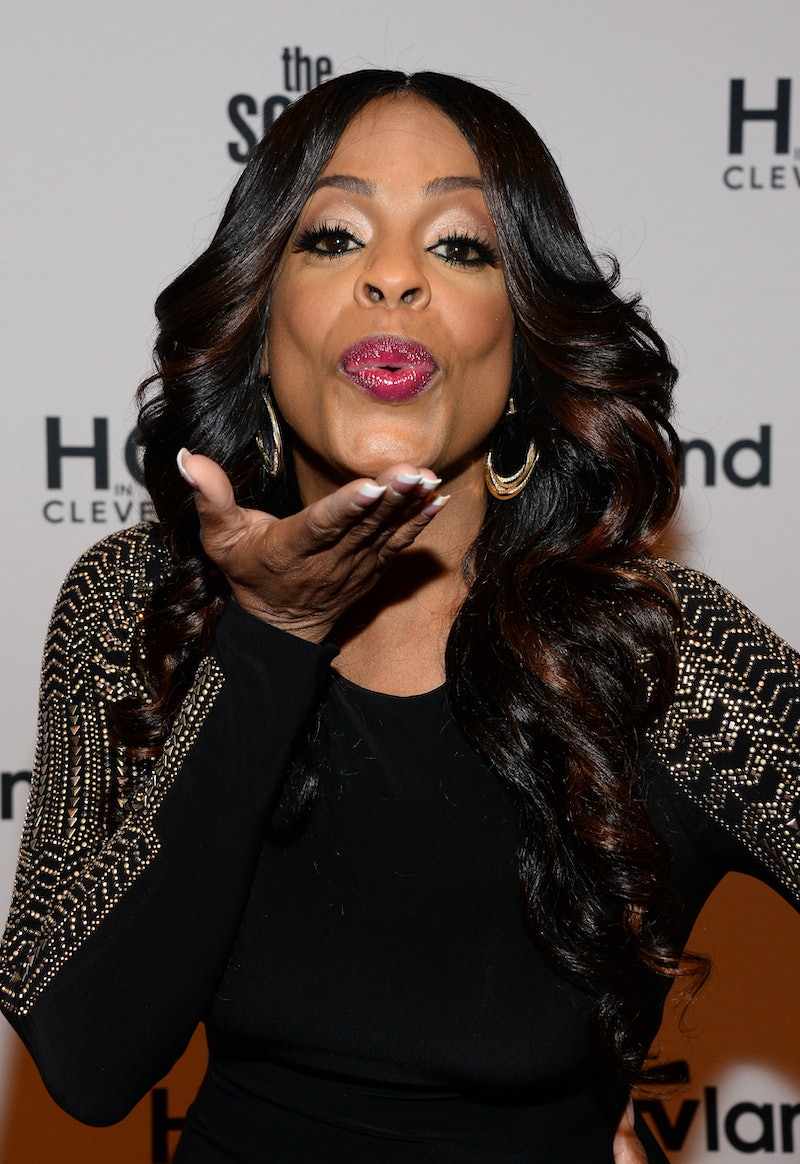 Niecy Nash is pretty damn fab, if you were wondering. Nash did an interview with Playboy to outline exactly all the reasons she's someone to watch, both for her TV roles and her upcoming book. Nash is currently on the incredibly underrated HBO show Getting On as geriatric nurse Didi Ortley in an elderly care home, playing the straight woman among a bunch of loony doctors and medical staff. As Bustle's own Jefferson Grubbs noted of Nash's Ortley on the first season, "She’s the only one who seems to be the least bit concerned with the welfare of her patients, and as such is often the warm, beating heart of the show." A pretty impressive departure from her over-the-top role as Officer Raineesha Williams on Reno 911. And did I mention she recently guest-spotted on The Mindy Project?

The Good: On Baring it All on Getting On

Nash was initially intimidated by taking down the glamour a notch to play Ortley, but eventually embraced it:

It was funny because you get so used to living in a world where they doll you up as an actor, to then come play a role where you don't get anything. I find that I have a different appreciation for my face. I haven't seen my real face in so long!

Getting On is a show that really tries to depict a reality, even though the characters may be over the top in nature, they aren't physically. And kudos to Nash for finding it an adventure, not only as a departure from her other characters but as an effort to create a different kind of show.

The Good: On Being Open About Sex with Your Partners

In discussing her book, It's Hard to Fight Naked, Nash talks about some women's hesitation to be open about their desires:

What's so interesting is that [women are] more willing to have conversations about "Do you want to get married? Where do you see this relationship going? Do you want to have children?" than we are to ask, "What kind of sex do you like? What are you into there?"... if you're going to be with someone for the rest of your life and they're failing to meet your sexual needs is like doing a slow dance with death.

Slow dance with death might be a little hyperbolic, and I think she's generalizing a bit about how women assert their needs in a relationship, but I do agree that a clear understanding of what each partner wants sexually in a relationship is crucial, and I'm with Nash on that one.

The Weird: Hating on Housewives

Does she have a cultural "blind spot," she was asked?

I have a lot of blind spots. I don't watch any reality show that has the word "Real" or "Wife" in it. I just can't. I'm all pro-sisterhood, I don't want to watch anything where women are being mean to each other. I just don't do it.

Hmmmmm... I don't really see the need for such a reduction of what kind of entertainment or shows that the Real Housewives franchise provides. I mean, she says she doesn't want to watch anything where women are being "mean to each other," but isn't this heavy judgment pretty mean in itself?

And here's the quote that is gonna live on from this interview, which is already leaving tons of Twitter users astounded and in some cases, pretty pissed. Nash said the REAL title of her book should have been Stomach Full, Penis Empty: A Woman's Guide to a Happy Marriage. Which, oddly enough, IS the title of one of the chapters in the book. Here's what she has to say:

"A BJ a day keeps the divorce attorney away" and I say that because I feel like men are profoundly simplistic... Keeping him fed and drained, you have no problem. We are really more complicated than they are and I think that women are more generous with oral sex because we nurture by nature.

I'm just really not here for this, in so many ways. First of all, I don't think using sex as bargaining in a relationship is healthy. I don't know if that is what Nash meant, but it's certainly how it reads. "Keep him fed and drained" is a pretty disgusting morsel of advice; it's not a woman's job (or a man's job) to satisfy a man to prevent him from fleeing a relationship. We do not have the responsibility to unconditionally provide for our partners while expecting nothing in return. It is not our duty to serve them and please them for the honor of being in a relationship with them.

And to hell with women being more generous with oral sex. We want oral sex just as much, g'damn it.

More like this
Sandra Bullock, Girlboss Extraordinaire
By Matt Harkins & Viviana Olen
Spice Girls’ Net Worth: The Richest Member Is Wealthier Than The Rest Combined
By Hugh McIntyre
Lydia Leonard Is Setting The Record Straight
By Olivia-Anne Cleary
Long Live Bennifer!
By Allie Jones
Get Even More From Bustle — Sign Up For The Newsletter