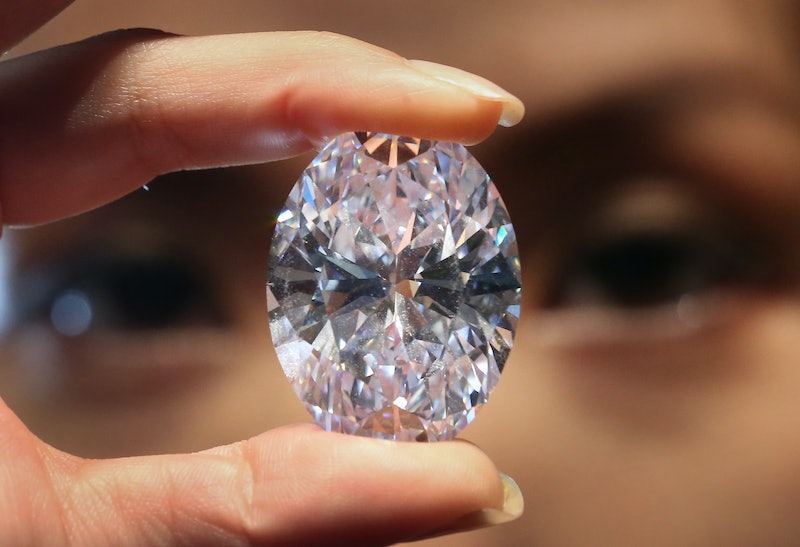 When you think about how diamonds are made, you think of immense pressure and hot temperatures deep within the Earth. And if you're like me, you think of them being mined by seven singing dwarfs — because Snow White is obviously based on real life. What you don't think of is peanut butter. But, weirdly, a scientist is making diamonds out of peanut butter to learn more about how the lower mantle of our planet works, and what role it played in our planet's creation, BBC Future reports.

Dan Frost, who works at Bayerisches Geoinstitut in Germany, believes a mantle filled with diamonds could have slowed down the warming of Earth, which aided evolution. So, he's essentially built a mantle simulator in order to figure out what elements could have been used to make said diamonds. Which is where the PB comes in. Carbon has been proven to create diamonds, and America's favorite sandwich spread happens to be rich in carbon. Front told BBC Future:

If we want to understand how the Earth was formed, then one of the things you need to know is what planet is made out of.

So what exactly is Frost looking for? Well, it's often thought that meteorites hitting the Earth played a huge role in the creation of the Earth's crust. But meteorites are laden in silicon, and the mantle doesn't have the amount of silicon in it that it would if that was true. Frost believes the silicon may have sunk deeper, into the core. He's also considered another theory, which is that the Earth used to have a bigger crust — with the expected amounts of silicon — but it was destroyed by impacts with meteorites.

Unfortunately, Frost isn't likely to strike it big with his discovery, because his peanut-butter diamonds take forever to grow and just wouldn't be cost-effective. However, he is using the research in order to help along technological advances. For example, real diamonds are used as semiconductors for electronics, which costs a lot of money. For obvious reasons.

Sadly, on top of being time-intensive and expensive, Frost's creation process is also... pretty dangerous. Small explosions are not abnormal in his lab, BBC Future reports, and they usually happen totally by surprise. Despite Frost's reassurances that the operation is totally safe, that would definitely put some doubts in my mind.

More like this
Grey's Anatomy Fans Refuse To Accept Kaimelia's Shocking Relationship Update
By Brad Witter
The 'Hocus Pocus' Sequel Finally Has A Release Date & It Makes Total Sense
By Shannon Barbour and Radhika Menon
Oops! The 'Stranger Things' Monopoly Game Has Spoilers For Season 4
By Alyssa Lapid
20 Photos From The 'Stranger Things' Season 4 Premiere To Make You Feel Old
By Alyssa Lapid
Get Even More From Bustle — Sign Up For The Newsletter