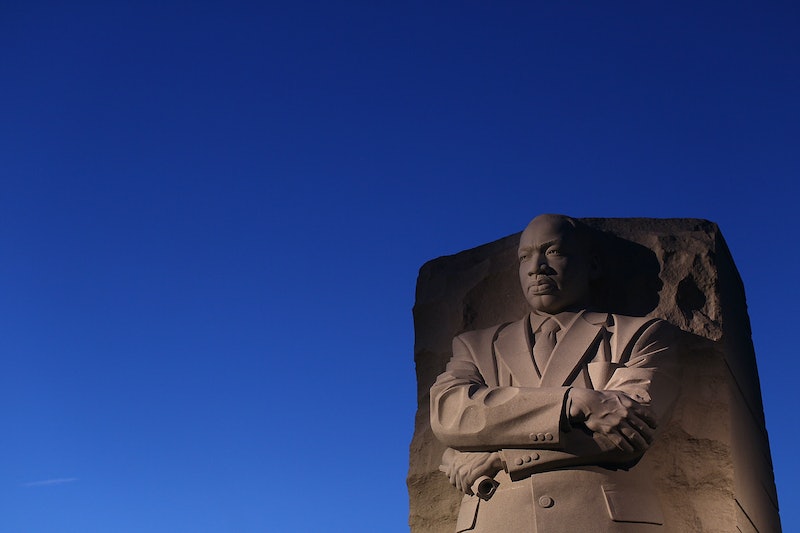 An appalling reminder of the heyday of Jim Crow's lawful racial discrimination has been revealed in the form of a letter from the FBI to Martin Luther King Jr., urging the civil rights leader to commit suicide.

Although written anonymously, King had ample reason to conclude that the letter came from the FBI. For one, its notoriously rapacious director, J. Edgar Hoover, had no qualms about discrediting King as an adulterer, and was obsessed with trying to prove he had ties with Communists. The FBI had also spied on King throughout the 1960s, until his assassination in 1968.

Two days after King's iconic "I Have A Dream" speech, William Sullivan, Hoover's domestic intelligence chief, wrote in a memo calling King "the most dangerous Negro of the future in this Nation from the standpoint of communism, the Negro and national security" — which, really, is pretty indicative of the kind of society it was at the time.

Filled with typos and corrections, the letter accused King of being "a colossal fraud," "evil," "vicious," and a “dissolute, abnormal moral imbecile.” It also threatened to expose the Nobel Peace Prize recipient as a sexual libertine:

No person can overcome facts, not even a fraud like yourself. Lend your sexually psychotic ear to the enclosure. You will find yourself in all your dirt, filth, evil, and moronic talk exposed on the record for all time. I repeat—no person can argue successfully against facts. You are finished.

Whoa. Talk about anger management! The letter practically drips with malice, which points to the kind of power that King wielded as the chief figure of the civil rights movement, instilling in the establishment a fear so great that they felt the need to resort to writing this alarming letter.

The author also attempted to mislead King on his race, writing, "you know you are a complete fraud and a great liability to all of us Negroes," but Beverly Gage at the New York Times said that King was certain it had come from the FBI.

In an apparent shot at goading the civil rights icon into killing himself before he was to be "exposed," the last paragraph reads:

King, there is only one thing left for you to do. You know what it is... You are done. There is but one way out for you. You better take it before your filthy, abnormal fraudulent self is bared to the nation.

Gage called the letter "the most notorious and embarrassing example of Hoover’s F.B.I. run amok." The bureau's sad attempt clearly backfired, as did Hoover's numerous struggles in vilifying King. As a testament to how gargantuan a fail it was, King is now revered as "a model of moral courage and human dignity," wrote Gage, and Hoover widely reviled.