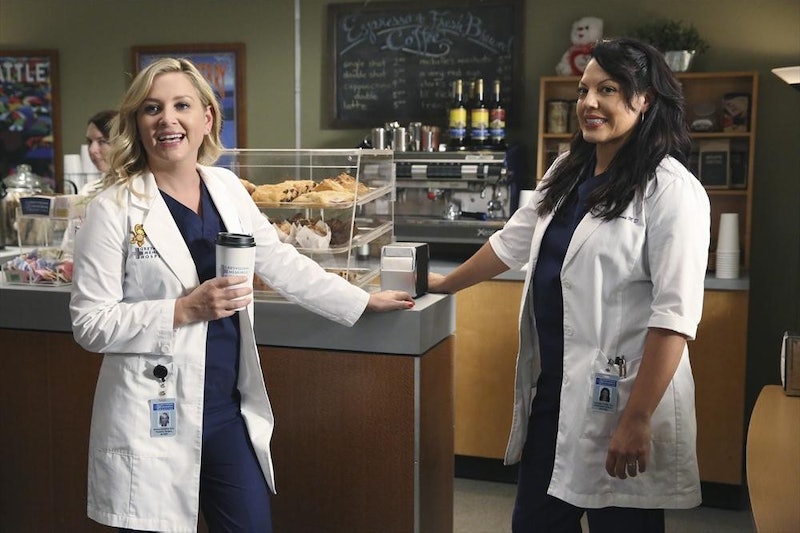 It's been three weeks, and I'm still not over the fact that Grey's Anatomy split up Callie and Arizona. I've rooted for them since the first time Arizona roller skated her way into the hospital's pediatric ward and into my heart, all at the same time. They balance each other out perfectly, they're super adorable, and Jessica Capshaw and Sara Ramirez have crazy chemistry that practically jumps off the screen. Unfortunately, the flip side of the crazy chemistry means that when their characters fight or have emotional revelations like the one Callie had in that therapist's office, it's absolutely heartbreaking. The good news? I am 100 percent positive that Shonda Rhimes would never separate the institution that is Callie and Arizona up permanently.

Because Rhimes might not be aware of it, but over the past 11 years, she and I have developed a pretty intense relationship. Don't get me wrong: This woman has proven that she's capable of doing some pretty crazy things, and I'm still not over the fact that Lexie and Mark are no longer with us. But divorcing the show's most stable couple? That's not happening. Several super painful episodes in a row, though? Yeah, that's happening. Sorry.

In a September interview with Entertainment Weekly, Rhimes called Callie and Arizona's relationship issues parallel to Meredith and Derek's, after, in another interview with EW, saying that Meredith and Derek's marriage won't end in divorce. As we all learned in fifth grade math class, parallel lines run side by side, so shouldn't this be a hint that Callie and Arizona will be OK too?

Plus, this is typical Rhimes behavior. On both Grey's and Scandal, she has a long-running history of ripping apart her shows' most beloved characters only to put them back together again in a way that makes their relationships even more meaningful than they were before. And for Callie and Arizona to be struggling right now isn't a surprise. Huge things have happened to them. There's no way a couple can survive an incident of cheating and a lost leg unscathed. It wouldn't be realistic if they didn't hit a rough patch, and this is theirs. But rough patches don't last forever.

Regardless, I think that Callie made the right decision. She and Arizona need time to live separately and have some much needed space, and I think space will be exactly the thing that brings them back together in the end. It could come at the end of the season or the end of the series — but either way, we Calzona fans have a beautiful reunion in our future.