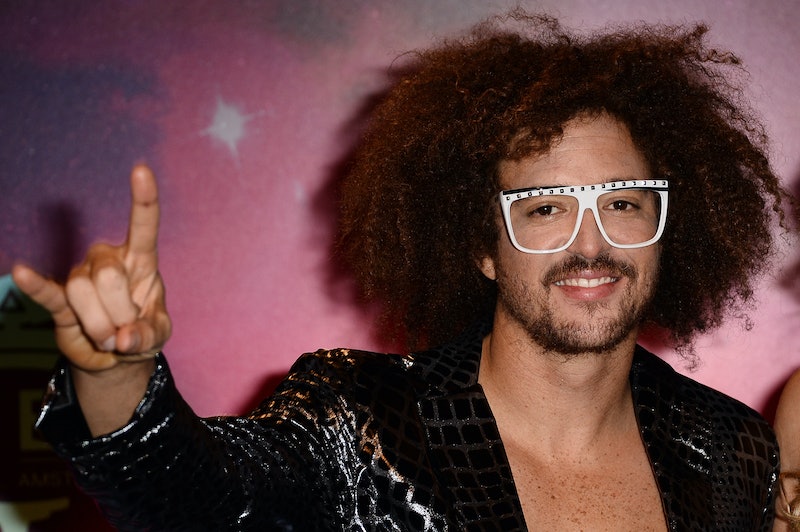 The Internet is ablaze over the recent release of "Literally I Can't" by LMFAO's Redfoo, a song and music video so misogynistic that irate critics are calling for an apology, while Redfoo refuses to say sorry. Between the song's lyrics and accompanying music video, which tell women to "shut the f*ck up," and depict the type of anti-consent sexual assault activity running rampant on college campuses nationwide, some have dubbed "Literally I Can't" the most sexist song of 2014. Here are some of the lyrics:

Sexist lyrics and imagery have been a part of music and pop culture for decades. Rap videos in particular became synonymous with sexual imagery and degrading lyrics, but for the most part, that remained divorced from the world of Top 40 music. That is, of course, until rap music made its way to the mainstream. Even then, however, the more troublesome songs remained relegated to radio designated for such music. For some reason, however, it feels as though we've entered a new, golden age of misogyny in music — only this time, it's made its way to pop radio.

Last year brought us Robin Thicke's "Blurred Lines," a song that while undeniably catchy, served as an anti-consent anthem based around the refrain, "I know you want it." Some of the song's critics went so far as to disclose that their rapist used this phrase as they were sexually assaulted.

"Literally I Can't" aside, some of 2014's biggest hits have made "Blurred Lines" seem like the Golden Girls theme by comparison.

In a recent cypher for his new Shady Records compilation, Eminem raps, "I'll punch Lana del Rey right in the face twice like Ray Rice." The video for Maroon 5's "Animals" has left many asking whether the video is actually promoting the stalking of women, and with lines like "I'm preying on you tonight" and "You think that you can hide," they have a valid point.

So, what's up with this? The music industry has always had a misogynistic soft spot, but lately, things seem somehow worse. As someone who studied music business during my time in college, I believe this can be directly attributed to the fact that "Blurred Lines" was arguably 2013's "song of the summer."

The music industry functions on a sort of "if it's not broken, don't fix it," model. As the vast majority of albums fail to recoup the cost of production and promotion — a 2011 episode of NPR's Planet Money detailed the million dollar effort to make Rihanna's "Man Down" 2010's "song of the summer" — major labels stick to what works. "Man Down" was considered by many to be a dud, as it peaked at number 59 on Billboard's Got 100 chart; hardly "song of the summer" level success.

Sadly, given the gigantic success of "Blurred Lines," it seems industry executives are banking on the public's general nonchalance with regard to misogyny in pop music in seeking success in an industry otherwise in peril.

As the video for "Literally I Can't" has racked up more than a million views since going live on October 30th, it seems that women being told to "shut the f*ck up" is the latest in sexism as profit-generating device, and that's truly a shame.

It seems that women being told to "shut the f*ck up" is the latest in sexism as profit-generating device, and that's truly a shame.

What can be done to fight this decades-long creep towards an anti-woman, dehumanizing culture in music? For one, we need to stop feeding the machine. No matter how catchy the tune, if there's hope in shifting the themes within popular music, we simply cannot give in. Modern-day pop music is largely created by a small group of individuals, measuring, calculating, and making moves in the name of business. Earworms will continue to be produced and promoted. The question, however, is what sort of themes we'll see in years to come.

More like this
Rihanna Says "I Do" To A$AP Rocky In A New Music Video — With Her Grill
By Jake Viswanath
Spice Girls’ Net Worth: The Richest Member Is Wealthier Than The Rest Combined
By Hugh McIntyre
How To Use Festify, A Spotify Plug-In
By Emma Carey
Stormi Just Walked A Red Carpet With Mommy Kylie Jenner & Daddy Travis Scott
By Hugh McIntyre
Get Even More From Bustle — Sign Up For The Newsletter