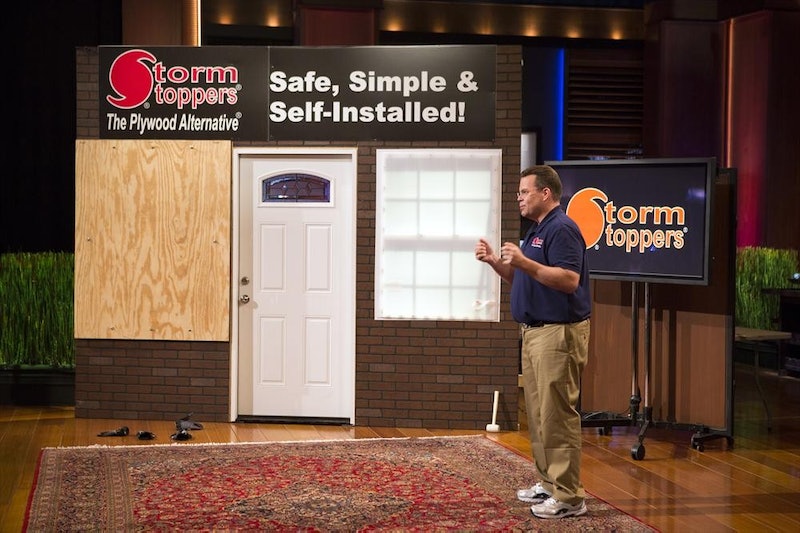 Sometimes, you hear about an idea pitched on Shark Tank, and you think, "I can't believe the Sharks went for this." (The "Buggy Beds" bedbug glue traps — that just tell you if you have bedbugs but doesn't get rid them — comes to mind; it was already in stores, but all of the Sharks wanted in.) Other times, you hear about a Shark Tank product pitch, and you think, "Genius! Why didn't I think of that?" Storm Stoppers, the corrugated plastic alternative that protects windows in a big storm or hurricane, falls into that second category, coming up with a much better way to cover windows and doors. So, if you live in the hurricane belt (or are just worried about the next big Nor'easter), where can you get the Storm Stoppers featured on Shark Tank ?

Easy: Right from the Storm Stoppers website. You do have to do a little legwork first, though. To request a quote, you have to measure all your windows and doors. But once you do that, you can request a quote online that will include all of the plastic sheeting that you need, along with the fasteners required to put it up in a hurry when you see the storm a-brewin'.

To me, it's clear that Storm Stoppers is better than boards and nails. People usually use plywood, which generally sucks in extreme weather conditions. It's heavy to put up, and requires you to put holes in your walls. It warps with water, so you can't use it for anything once it gets soaked. And, to top it off, it's not even all that good at keeping things from smashing through the windows.

The 3/8"-thick, plastic Storm Stoppers is lighter, so one person can batten down the hatches when the rain starts to arrive. It doesn't use nails or bolts, just (super strong) stick-on fasteners. It's reusable, so you just have to get the plastic custom-made once, and then you can use them over and over again. And, they make better barriers for flying debris. Just take a look.

Storm Stoppers is already somewhat of a success, and it's been around for a while. The inventor and the president of the company, John D. Smith, went on CNBC in 2008 to talk about the product; he mentioned that he sold to mom-and-pop stores and turned down the big-boxes like Home Depot and Lowe's. (He seems a little nervous in this clip. Let's hope he's learned to be a little more comfortable on-camera in the years since, or else the Sharks will smell blood.)

To me, that's a slam-dunk success. It's a product that people need, that helps saves homes and potentially lives, and is the only one of its kind out on the market. Then again, there's a reason why I'm a TV writer and not a multi-millionaire business tycoon. We'll see if the Sharks go for it.