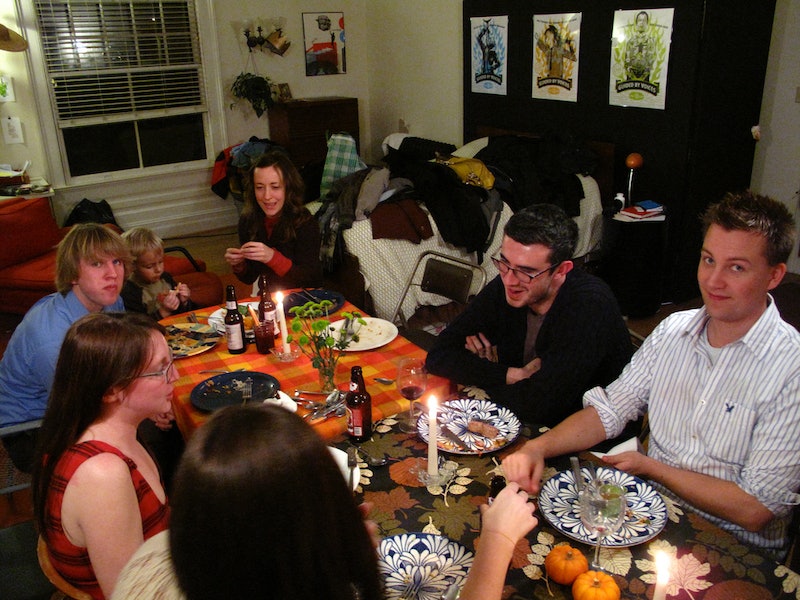 Celebrating “Friendsgiving” as opposed to plain old Thanksgiving has become a pretty huge trend over the past few years — but what’s the current state of the holiday? Social discovery app Skout recently surveyed more than 1,3000 of its users to get the lowdown on who’s celebrating Friendsgiving, how they celebrate it, and more. Here’s what they found out.

Although the term “Friendsgiving” has only achieved prominence in recent years, I’m pretty sure the trend itself has existed for significantly longer. When I was a kid, our Thanksgivings were kind of like a combination of the “traditional” (whatever that means) family-based Thanksgiving and Friendsgiving. My folks were transplants to Massachusetts, as were a number of other families on our street — so early on, we all started gathering together for Thanksgiving and other major holidays in lieu of traveling several states away to visit extended family. The effect was that we were able to celebrate both with our immediate family, as well as with our closest friends.

I think maybe the difference between Friendsgiving in the era before the word itself existed and after its proliferation is this: "Thanksgiving" (and, by extension, the kind of "Friendsgiving" my family and friends used to celebrate growing up) has traditionally meant something very, very specific, “Friendsgiving” is a more general sort of celebration. It’s about taking some time to appreciate the people in your life; to spend some time and share a meal together; and simply just to be for a moment — to exist outside the trappings of everyday life, to breathe, and to enjoy being on this crazy planet of ours. Not a bad philosophy to have, right?

But no matter what we call it, it’s pretty clear that Friendsgiving is here to stay. Here are some of the highlights from Skout’s Friendsgiving survey: